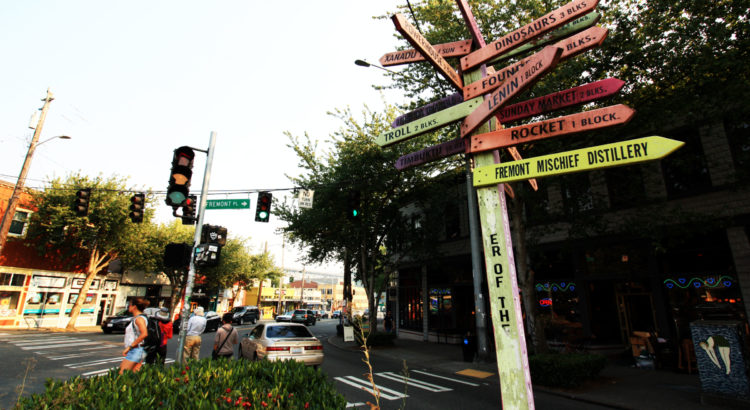 A group of volunteers are recreating the famous ‘Center of the Universe’ sign that was taken apart and swiped from the corner of Fremont Ave N and N 35th St in Fremont two weeks ago.

The Fremont Arts Council hosted a sign-making party at the Powerhouse on Saturday and Sunday. Using wood donated from Dunn Lumber and paint from Stoneway Hardware, a dozen volunteers began piecing the landmark sign back together under the guidance of Maque daVis, who created the original sign back in 1991.

“It never had a permit,” daVis told the Seattle Times, adding that the idea came up when he, his wife and some artist friends were having a beer. They chose the various destinations based on their different interests. “It was the way Fremont was then,” he told the Times. “Before gentrification, there were a lot of artists in Fremont.”

This is reportedly the third time they’ve had to rebuild the sign — it’s been knocked over by drivers before, but never stolen.

Police have video footage of the person who stole the sign, and it’s still an active case, according to SPD. Caroline Sherman from the Fremont Chamber of Commerce said the sign theft is just one of a recent string of vandalism and break-ins. Sherman said the chamber and other Fremont groups have an upcoming meeting with SPD to discuss the need for stronger police presence in the neighborhood.

The volunteers plan to reinstall the sign this coming Saturday (Nov. 24), weather permitting.