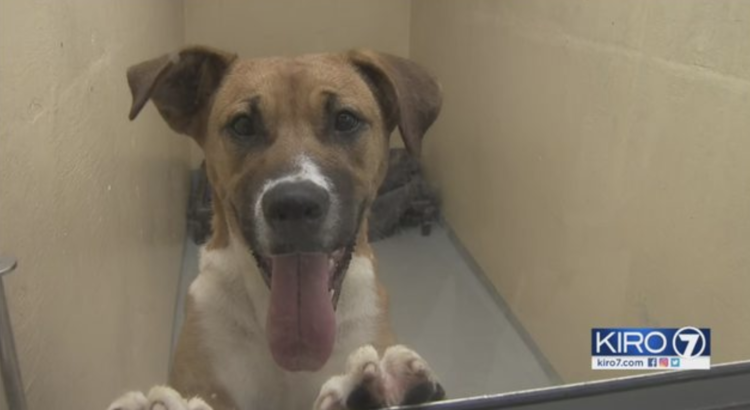 A dog was taken to the Seattle Animal Shelter after a man abandoned it at Golden Gardens on Saturday.

According to KIRO, at 1pm, a man in a large black pickup truck let the dog out of a crate near the beach and drove away. A bystander stayed with the dog for about an hour until the Seattle Animal Shelter could pick him up.

It’s a crime to abandon an animal, the consequences for which could include up to a $500 fine.

Ann Graves, executive director of the Seattle Animal Shelter told KIRO that it’s “just so unnecessary” to abandon an animal — the shelter offers free rehoming services for those who can no longer care for their animals.

For now, the dog will stay at the shelter while authorities try to locate the man who left it at the park.

Ah, so if I am to understand this correctly: “Ann Graves, executive director of the Seattle Animal Shelter told KIRO that it’s “just so unnecessary” to abandon an animal — the shelter offers free rehoming services for those who can no longer care for their animals.”

…offering free services didn’t stop some jerk from doing whatever they wanted anyway? Shocking. I wonder if this applies to other things, too.

Also, animal abuse is probably the ONLY THING that NeoSeattleites seem to care about, so maybe they will start to realize that the animals kept by our tent/RV friends are often not only sometimes dangerous (muh pit baby sorry about your toddler), but also mistreated because their “owners” are insane criminal addict sociopaths.

What is wrong with you?

What is wrong with you? I’m against animal abuse AND letting animal abusers camp all over the city. Grow up, cat mom!

Can we assume that you don’t understand that people like you and your childish and pathetic comments here are just another part of the problem? Dare to be intelligent, helpful, and part of the solution.

If you were a real grown-up, you wouldn’t need to connect this story into the homeless issue. That’s childish!

Betcha a big bag of kibble the assh*le who dumped the dog doesn’t live around here and and even bigger bag of kibble we probably pay for some of his other mistakes. Probably another RV cowboy lowlife.

You are just full of angry assumptions!

@lynsey. There is nothing wrong with cognitive dissonance. I hate to break it to you but you are the problem.

You opened up a can of worms CD.

I believe this is the highest crime a person can commit in Seattle. Prove me wrong.

Also, cute dog. Glad the dog was rescued and hope it gets a nice new home.

…….and junkies stabbing, raping, setting fires, beating people with baseball bats, doing heroin, are all ok with you?

GRRRR that makes me SO mad!

GRRRR – that makes me SO angry!

GRRR- that makes me SO angry!

Sorry it posted three times. Guess that’s how mad I am.

Yeah let’s not get angry about the RV felons and rapists, but a dog let loose wow it’s pretty much the worst thing that’s ever happened. Maybe a protest march for dog parent awareness could be just the thing for you!

Is it not possible people can hold more than one belief at a time and be socially aware about a multitude of things? This is a post about an abandoned dog – so it seems reasonable that that’s what people are responding to. Sadly, there are more than likely a multitude of post about felons and rapists. It’s apparent you feel passionately about this issue and I hope you find people who support you the way the folks here are supporting this abandoned dog. We all need support.

Have you been triggered sjw? Perhaps you need some avocado toast and a hug?

Shut it yuppie! You obviously don’t really care enough about your community to do more than just pathetically troll a small town blog. Get a life and actually take action against these “RV felons and rapists” instead of cowardly posting about it on the internet. You are all talk and no action, which just says complacency and cowardice. You are no hero, just another example of what’s wrong with America.

Haha NOPE not a yuppie. Hey fun facts: Amy Schumer is fat and unfunny, Bill Clinton is a sex offender, and Seattle politicians are lying, corrupt scumbags who prey on moronic pet parents who have more money than common sense. Keep buying their “social justice” lies and please keep your dogs LEASHED and OFF THE BEACH IT’S ILLEGAL.

Fun Fact: You are boring and useless.

Why don’t you run for City Council CD, that way you can fix all the things you think are wrong with this city and its people.

And when you’re paying for every single junkie in this town you say nothing?

I am genetically required to post something with the word sockpuppet. Thank you.

Wow, the sockpuppet has sockpuppeted me! I’m flattered Harley Lever, but I’m spoken for.

Ooooh, I’m being courted by TWO of the sockpuppet’s personalities. What a lucky guy!

There’s Truth in Fiction, but I’m betting you’re single but nobody wants to mingle.

I am required to call you a moron.

What the hell is wrong with people! I hope he finds a great home

Do you not see the crimes being committed by the junkies??!?! What the hell is wrong with you?! Open your eyes! There’s drugs and crime everywhere and your yelling about a dog being dropped off? What about the guy stabbed in the chest two weeks ago by a junkie? Are you trying to tell me if a dog was stabbed by a junkie you would then pay attention to the issues?!?

Maybe, just maybe a few RV dwellers can also be “dropped off” at GG as well, um, to find new homes of course. Why yes, we can even have an RV turn in program, offering tickets to the symphony or plays! That worked so well with guns, we have to pursue this with RV’s now too.

Love and compassion are necessities, not luxuries. Without them humanity cannot survive.
Dalai Lama

Screw the Lama, man. He stiffed Carl Spackler on the tip!

What did the Lama say about junkies living in rv’s and destroying a town while people supported and paid for the junkies to destroy the very town they lived in?