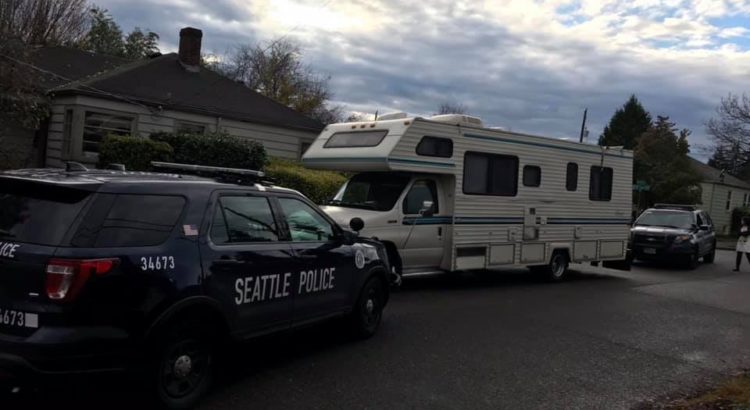 Update: Seattle Police say they weren’t able to locate the warrant suspect who fled after a short chase yesterday afternoon. SPD says the warrant was issued because he failed to show up for a court date for possession of narcotics.

The RV was towed and is now in police custody.

Original: A man was being chased on foot Ballard after fleeing from his vehicle on Sunday afternoon around 3pm.

According to several witness reports in the My Ballard Group, an RV was being chased in Sunset Hill, eventually stopping near NW 77th and 23rd Ave NW. The man ran from his RV and police followed in pursuit, with a K-9 unit called in to search the area.

My Ballard Group member Bret says a policeman on the scene informed him that the man had been pulled over in a routine traffic stop, but then ran because of an outstanding warrant.

We have a call out to Seattle Police to learn more — we’ll update with new information.

Thanks to Maria Ball for first reporting the chase on the My Ballard Group, to Pete Spear for posting the above photo, and to Silver for police scanner reports.

Oustanding warrant? If we believe in social justice shouldn’t those be dismissed?

No, your an idiot.

Hi, thanks for your support! You speak as though Woke William chowing dong is a bad thing. Have some respect for choice! That’s Seattle’s way…the Social Justice Way! Sexual intolerance will not be tolerated. Get Woke, Friend! And Remember, Vote Salty, Vote O’Brine 2019!

why are cops NOT routinely running ID’s for warrants at all the bum camps, illegally parked RV’s? none of the campers are doing so legally so there is easy probable cause to check for warrants….

i would bet 50% of the bums have active warrants.

Aw, you cant do that, unless you do warrant checks on all those priviledged people with houses and valid driver’s licenses and vehicles. Housed people commit crime too, and you are just “poor shaming” vulnerable community members like our RV friend.

Before this land was privatized, and people moved in I’m sure you could pitch a tent no problem

There were no tents that far back.

Yes, and before chemotherapy the doctor would have bled you if you had cancer. What’s your point?

Great question! I asked SPD this very question. They are not allowed to.

True – go to Seattle.gov and read the MDARs. Pages and pages of campers’ rights with a tiny nod to the impact on the surrounding community. The police have to treat all of the “homeless” the same because of these policies, whether they are truly those who will take support to get off of the street or the criminals we can all identify in our neighborhood. It’s a real eye opener. I think the police would like to be more effective, but they can’t be because of the MDAR policy.

@Done: That is a shocking order, to command sworn officers not to enforce the law, not to check for warrants. Cops making traffic stops check for warrants — what’s the privilege for illegal tents’ occupants?
If you have been told this by different Police officers maybe we request a copy of the order under public disclosure laws.
How else can we get some transparency around this issue?

So. How many of you morons are still supporting the junkies and their RV’s?
If you idiots don’t think there’s more people with outstanding warrants freely living in their RV’s you should have your head examined.
These are criminals. Nothing more. Nothing less.

Less Nothing. More Nothing. criminals are These. Examined head your have should you RV’s their in living freely warrants outstanding with people more there’s think don’t idiots you if? RV’s their and junkies the supporting still are morons you of many How. So

“man had been pulled over for a routine traffic stop”

There are lots of these guys who have outstanding warrants living on the streets of Seattle. They are living under the radar in their beater RV’s, trucks, vans and tents (just look at the Northgate I-5 Exit for yet one more unauthorized encampment full of garbage. Some use drugs and some sell drugs, and steal your stuff to support their habits. Until the Seattle City Council comes to grasp with this reality of criminals living on the streets and in plain sight, this sort of stuff will continue. So, do you suppose the RV has current registration, and even belongs to this guy? Lots of questions that your District 6 Council member, O’Brien should be asking on your behalf. What do you suppose they found in the RV, or do police need a search warrant to look inside, even though it is stopped and temporarily abandoned?

What if he hit some cars or killed somebody during the “chase?” Do you suppose he had liability insurance on the RV, as is required by state law? Didn’t think so.

Then it would be just a thing “that happened” not the fault of the RV dirtbag or the city for allowing them to occupy space here even though they are clearly a public safety threat. Only people with whom liberals disagree can be held accountable for things like: social media posts that are a little too factual, “offensive” jokes, defending yourself lawfully against an attack or home invasion, and being heterosexual and too pale and too employed.

Meanwhile, put down that plastic bag Citizen, you are DESTROYING THE PLANET even though the Amazombies all make their money shipping plastic crap from dirty Chinese factories. Got it?

Hi, thanks for your support! Come now, voters! This man is a vulnerable community member. Why, I’ll bet you that warrant is nothing more than failure to curb his pet. Our RV and tent campers are just down on their luck citizens in need of a bit more social justice and a few more hugs! They all want to get back on their feet and contribute to society! None of them are criminals, none of them are violent, all of them are fine people, like you ‘housed’ people. The narrative spun by Big Hobo is that these people fell through the cracks, not because they are criminals and junkies, but because the system failed them. Big Hobo says they’re not criminals! Big Hobo knows all! I suggest you Get Woke, Friend! And remember, Vote Salty, Vote O’Brine 2019!

Huh. An RV camper with a WARRANT. SHOCKING!
I think it’s pretty clear that Seattle Liberals ™ give zero shits about public safety, order, or even their precious “environment”. These RV criminals routinely dump their chemical toilets into the storm drains when they aren’t busy ripping off houses, cars, and “being vulnerable”.

This is your city run by cat ladies. NICELY DONE!

So how’s this working out, all ye Bleeding Hearts?

Did we fix poverty and get all the heroin addicts clean yet?
No, you say?

Wow, that’s pretty shocking considering how well the city has handled all other issues. I’m sure just a few more tax increases and Stranger articles will get this all cleared up in no time. Resist!

Also for the Kids: remember to keep your legs closed and the needles out of your arms, that way you don’t end up…ah, never mind. This is Seattle where actions are CONSEQUENCE FREE and PASSING JUDGEMENT is a TERRIBLE AWFUL OPPRESSIVE act. Liberals may DEMAND THAT SEX ED be taught at an EARLY AGE but asking teens to use condoms or *gasp* practice abstinence is pretty much a hate crime. Remember, this is all the fault of “colonialism” or something.

…to keep themselves elected and well funded.
No dads = single teen junkie moms

Did they catch the guy? That’s unclear

Until the City of Seattle wakes up and bans RV and tent camping, this will only get worse.

There is no more empathy, and there shouldn’t be.

Will anyone on the Seattle City Council have the political will to stand up for what’s right?

No, they won’t. They are well paid cowards as are many of their supporters.

And what did they do with the RV?

It was bronzed and turned into a new Social Justice Sculpture in front of City Hall.
Very pomo

“And here children, we see a statue of the Mike O’Brien memorial RV. This was an instance where social justice didn’t work, and a junkie hobo was forced to endure stigmatization by the old, straight, white men who keep you and I down. Remember kids, no Social Justice, no Societal Control.”

Can someone explain to me how in the hell an RV out runs police cruisers to where they can’t box it in. Seems like every time these homeless people run from the cops they get away.

You and I could make beautiful music together, PJTT!

I came for the photo ops, I stayed for the donkey show. Tijuana!

What a bunch of wack jobs commenting here

Not as many as in OUR PARKS.
Careful with the name calling, you’ll hurt my fee fees.

Can I interest you in a bunch of illegal voters and maybe some tax increases?

Say friend, are you in need of a hug? Would you like to come to a safe space, before you become triggered?

welcome to the internet

The bum ran to Mike Obrien’s house for sanctuary