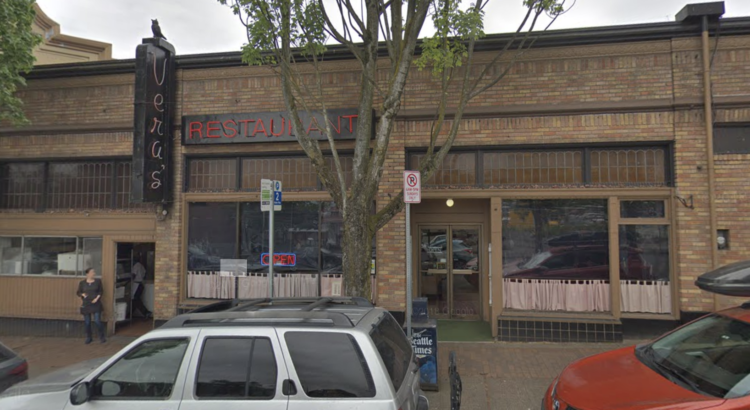 Vera’s, the beloved breakfast and lunch diner in the core of Ballard is shutting down at the end of the weekend.

Staff were told recently that a closure was likely, but were informed this morning that their final day would be Sunday, according to Vera’s server Melissa Barnhart*.

“I’ve been trying not to cry all day,” Barnhart told My Ballard. She’s worked at Vera’s for over three years, and says they run with a small staff — just three full-timers and a few staff who work one day a week.

Vera’s has been a staple in Ballard for as long as most locals can remember. Barnhart said she isn’t sure when exactly it opened, but that she knows it was “sometime before 1965”. Owner Nick Polimenakos bought the restaurant in 1985, and has kept it old school — with no computers, they write tickets by hand, and don’t take credit cards. Barnhart said Polimenakos plans to remodel the diner into a pizza restaurant.

“It’s a place where you know everyone who comes in,” she said. “I’m just sad that I don’t have time to say goodbye to my regulars. It’s just such short notice.”

We have a call out to Polimenakos to find out more about his pizzeria plans — we’ll update when we know more.

*An earlier version of this story reported that the staff were “abruptly” told on Friday morning that they would be closing on Sunday. However, Barnhart clarified that the staff had known the closure was coming, but didn’t know when.

…Ballard is just one tiny part of the overall destruction.

yea, it only means “destruction” when a business alters its products. We have been very fortunate that the billions of times that other businesses have altered their missions throughout history didn’t bring the apocalypse. Good Lord. Overreach much?

Stop fellating Bill Gates and get off my comment, Boomer!

Pretty grimey to do your employees like that. Only a few days notice?! Won’t be trying the pizza after learning this.

I have been going to Vera’s since I was 4 years old, and I am 34 now. I am super sad about this. I loved the no frills, easy menu, simple vibe.

Such short notice and right before Christmas. Crappy way to treat people and says a lot about the owner.

Typical greedy owners. Be honest with your employees for crying out loud instead of stuffing your pockets on their backs. Been in the business for 42 years and see this all the time. Give them a better notice and be honest. If they feel respected the might stay. I’m sure if YOU did they would be long gone. Respect.

At Christmas none the less. If they knew what they’re doing next then they thought about it long enough to give them better notice.

Why don’t you refer to them as your parents rather than your kids grandparents? To make it sound worse?

There is a disconnect here. I wouldn’t want anyone speaking about my parents in such a way. However, I’m sure if your kids were of the age to comment on how disrespectful it is for people to be speaking of them in this tone they would be.

Take ownership of how YOU feel.

Not enough vegan, gluten free and locally sourced, ethical food options. Plus the bathrooms were gendered like this is 1932.

That’s why they failed.

If your kid comes home brainwashed from the 300lb gender fluid teacher just bust a brick of tofu over his head before he grows up to be a Social Justice Warrior ™.

We don’t fat shame in the Megan home.

Everyone is entitled to an opinion. That’s yours. I’m guessing you’re a Millennial from somewhere else. Maybe you want to return there.

Obviously not a regular, otherwise you’d know they didn’t “fail.” It’s a pretty damn busy place on the weekends with loyal customers and awesome staff.

Being busy and a loyal staff does not necessarily mean a place is solvent.

God you’re a POS. Time to take your med,s grow up, move out of your parents house and get a life.

At least I can feel good about Meg the Veg getting more down votes than everyone else combined. All is not lost yet.

Go back to California.

This breaks my heart. So much of the Ballard I grew up with is gone. Veras was one of the last vestiges of my youth, the owner is a bum as far as I’m concerned.

There’s still Hattie’s Hat, but yeah, I feel you!

Ballard was destroyed way before this-but this certainly adds to it. MONEY is what it’s all about now days

Purpose of any business is to make money. He probably isn’t getting rich selling $10 breakfast plates and paying $15 minimum wage. Sure you would take a new job to make more.

Ballard is destroyed? Smoldering ruins? The streets are now all torn up, and the neutron bombs killed everyone? ANNIHILATION HAS COME!!! Gaaarrrrrrble!!!

Guest
That Guy On Market St With The Colostomy Bag

Vera. Vera. What has become of you?

Kinda tired of Ballard people with their inherited property. And I’m a Seattle native.

You may be from Seattle, but you have no soul

Times are changing. They always will. Veras has been my go to for 15 years. I was a little pissed when they cheaped out on the bacon about 6 years ago but they fixed it eventually. It’s odd when a small restaurant goes out of business with little notice. I’ve learned it’s usually because they were silently struggling to begin with. Hearts out to the employees. That pizza place down by Olympic did the same thing a few years back.

The sad thing is that these small independent and affordable places close down and get replaced by generic chains or eclectic expensive food. The ones that remain get so packed you cannot get in the door.

There is simply no money in this type of enterprise.

That pizza place (ZB) was run by an idiot. That is why it’s gone.

Another loss of authentic Ballard.

I don’t remember whether it was on here or on a comment thread on the Ballard News Tribune, but this isn’t news. I remember reading about Vera’s turning into a pizza shop at least a year ago, maybe longer.
I know because I’m so disappointed by pizza in Seattle, I’m hoping they can make some quality New York Slices.

I bet that building was sold.

Another Pizza joint? To bad cuz Vera’s was one of few remaining diners in Ballard. This is bad news.

Before making the owner out to be a bad guy, perhaps he will be hiring the same staff back. But who needs pizza? Ballard needs pancakes!

So let me get this straight, Vera’s was a symbol of all things that was good and great about Ballard before Amazon, millennials and dog-babies destroyed this little Duwamish village on the river banks.

Oh, and the owners were a$$holes.

River bank? There is a man made canal and Shilshole Bay. Is comparing Ballard to Duwamish supposed to be some kind of chemical dump thing? You sound like an Amazon Millennial with a dog baby.

Yes, river bank. Before the Ship Canal there was a small river that flowed out of Lake Washington and Lake Union to Puget Sound, and the Duwamish lived on it. It’s how usually water systems and societies work.

But it takes a social kind of stupid – “Old Ballard Stupid”- to think before the Ship Canal the water didn’t flow through there and the salmon ladders were built just for sh*ts and giggles because the fish used to just walk up.

You need to read up a bit. Your talking about two separate drainages. there was a small creek(not River) to shilshole bay from Union. More of a wet canoe drag. It did not support the current salmon run in both size and orgin. The current run is rerouted from the Black River when the drainage was altered with the opening of the locks. So while fish didn’t “walk up”. Those runs didn’t swim up that direction until the locks were built. The original run that would have used that creek was probably we’re destroyed with the lock construction.

I ate there once. It was terrible. I had an omelette that was actually grey.

Yeah, it was dump run by a$$holes who screwed over their employees. But that’s what made it an Old Ballard kind of dump.

Some residents of Old Ballard seem to think time stops and starts around their very existence. Question is, why haven’t they sold their beater houses for 3/4s of a million bucks, gotten a double wide in South King County, an F150 and started getting coffee from their favorite bikini barista, and mother of two, instead of Hipster Coffee Shop Inc.?

If you ask me the only people allowed to complain about “things going to hell” in Ballard are the Duwamish. Everyone else? Get outta here.

Calling my children’s grandparents a$$holes, awesome display of your character

Overlord is an appropriate title coming from a person wanting to be a photocopy of the rest. you know who else were overlords? Hitler, Stalin, Kim Jung un. Hope your happy living life in their company.

Can I get a side order of Mussolini with that!

I am sad to see it go, although the coffee was terrible. When my Mom was young, it was a hardware store and it had the first automatic doors in Seattle. That would be the 1940s.

An earlier version of this story reported that the staff were “abruptly” told on Friday morning that they would be closing on Sunday. However, Barnhart clarified that the staff had known the closure was coming, but didn’t know when.
I am always in awe of people who make neggative and disparaging comments without facts. (Steve,The Condo Overlord) your disrespectful comments are directed to to my children’s grandparents. Shame on you, think before you speak.

If someone needs to be called out for their behavior it doesn’t matter if they are a grandparent or not. Trump is a grandparent and look at him. Should we not call him out just because he’s a grandparent?

Very very sad to see Vera’s go. I get breakfast here nearly every Saturday as it reminds me of my grandpas restaurant that had been opened for about 70 years. Despite the staff knowing that it would be happening, two days notice is BS. I hope you guys have the decency to give them a severance.

Ballard has enough pizza places. Not sure why we need another.

My children’s grandparents own a pizza place! How dare you!

I’m sure their grandparents pizza is delicious!! 😜

I’ll bet the owner’s reading all your negative comments. Shame on you!!!