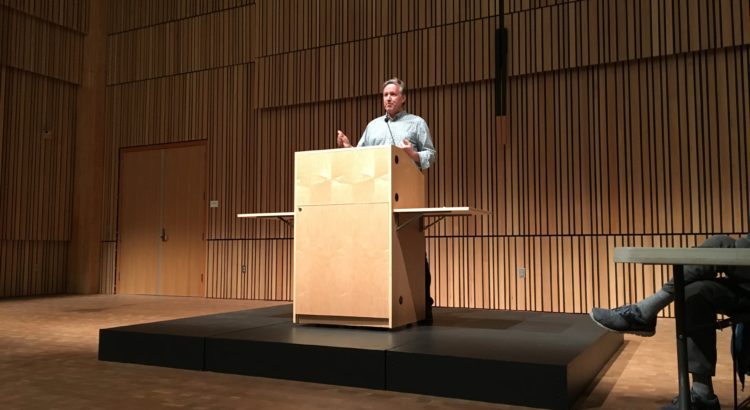 Nearly every seat in the room was filled for last night’s Ballard District Council meeting at the Nordic Museum, where Seattle City Councilmember Mike O’Brien spoke and answered questions from the audience for over an hour.

O’Brien opened the meeting with a short update on proposed new legislation for backyard cottage and basement unit/mother-in-law guidelines and updates on the city’s Mandatory Housing Affordability (MHA) plan.

The proposed change to guidelines for backyard cottages, or accessory dwelling units (ADUs), is in regard to owner occupancy requirements. Under the current regulations, a property owner must live on-site for at least six months of the year in order to rent out an ADU. Under the new legislation, the owner would not have to live on-site, but must instead have continuous ownership of the property for a minimum of one year before adding an ADU. 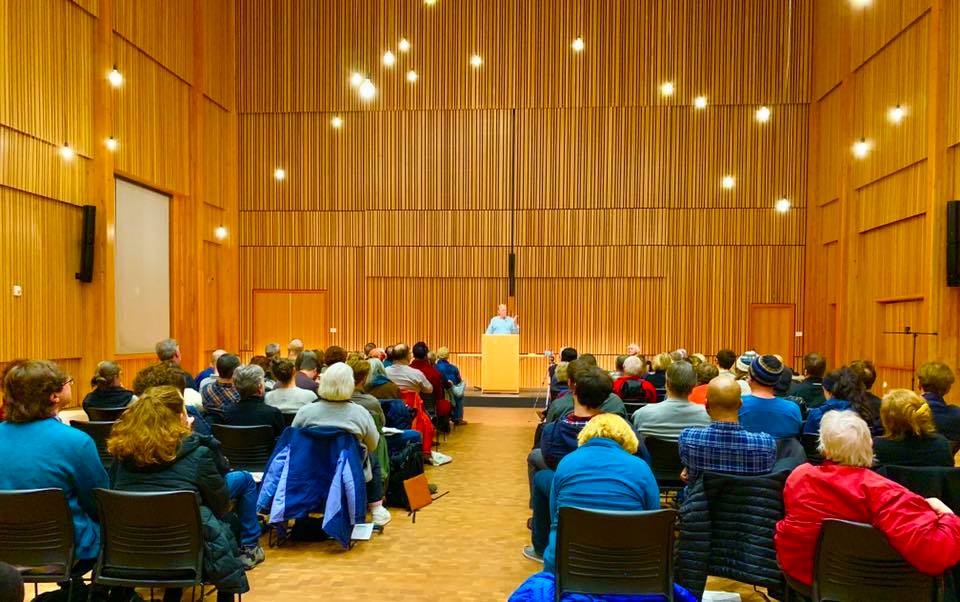 “We see that there’s a market for people to tear down older homes in single-family zones,” O’Brien said. “And how they maximize their profit is they build ‘McMansions’. What I’ve heard from a lot of folks is that’s not what we want to see happening in our neighborhoods. What that tends to do is make neighborhoods less affordable. What we prefer is to say, keep the existing house, touch it up and remodel it. If you want to add value, why don’t you build an accessory unit in the basement, or a backyard cottage. That adds two housing units that would certainly be less expensive than one, big housing unit.”

After O’Brien’s update, the microphone went around the room for questions from the audience, many of which revolved around housing, development and homelessness.

District 6 resident Mike Carr raised concerns that the MHA would allow developers to pay a relatively small fee to avoid offering affordable units in their buildings. “Builders could come into a neighborhood, buy all the buildings, pay a very small percentage fee to the city, and force everybody who was living there to move elsewhere.”

O’Brien recognized the potential for displacement in spite of the MHA — the legislation calls for 5 to 7 percent affordable housing per development, which O’Brien argues is better than nothing.  “Should it be 25 percent? Would I like to see 25 percent? Absolutely. The concern you raise about displacement happening, I absolutely share with you. But I would point back and say, that’s what’s happening under our current law.”

Several in the audience asked questions about homelessness, and for tangible evidence that the city is responding. While O’Brien pointed out several statistics that are positive — 350 new affordable housing units this year, more shelter options, and 2500 households that have transitioned out of homelessness and into housing — he still recognized that the problem is out of control.

“We have more housing, we have more shelters, we’re doing a better job of getting people into housing. Unfortunately, we still have more people living outdoors, and more people dying. There’s something broken in our system, that despite doing better work at the local level, there are more and more people entering homelessness every year,” O’Brien said. “We haven’t been able to keep up with the demand.”

If you want to watch the Q&A in its entirety, head over to the My Ballard Group on Facebook, where moderator Lauri Miller posted a video of the meeting.

Wednesday’s meeting was the last of the year — the Ballard District Council will meet again January 9.

Any options for folks who are not on Facebook or do not belong to that closed group?

Attend the meeting in person?

If you can arrange for time travel, asshole, I’ll be there!

Well you can go to the meeting or be a little whiny bitch and complain that the person who took the time to actually go and post it online didn’t do it in the right format for you.

I don’t really have a dog in this hunt but the dude wasn’t whining or complaining about how/where the video was posted. He’s just looking for a way to see it since the two proffered means are not available to him.

When you and the CC opened up the entire city to camping, and then piled on a month’s worth of red tape to remove them, and decriminalized it, you encouraged more people to exploit that option.

My consulting fee is $5k.

$5k? Dude, the bids start at $100k in the hobo industrial complex and that’s for stupid ideas that will only cost more and attract more hobos.

For the good of the neighborhood, I’m undercharging.

You know how you can tell when Weepin’ Mike O’Brien is lyin’?

His lips are moving.

Hi, thanks for your support! Friend, you don’t sound very woke. Don’t you buy into the myth that Big Hobo is working to find solutions to the homelessness problem? They must be, we’re taxing you enough for it! So how could I be lying? And especially to you, my most favorite constituent? And Remember, Vote Salty, Vote O’Brine 2019!

Do you not know the term “woke?” Yer breakin’ my heart, lady…

Maybe you should change your name to Hector.

Baby Boomers and older people never learned to use the internet correctly.

Very difficult time for some in Seattle. We will see more conflicts in the future due to the hard drug issue. I am a part of it everyday and have never seen it like this ever before. Heroin injection sites will be the straw that breaks the camel’s back.

Guest
Asking for a friend

Hey Andrew, why don’t you go f*ck yourself?

I agree. I hope it goes on Capitol Hill where it will cause the most social and political destruction. Hate to say but the left politicians are probably smart enough to just dump it on Pioneer Square.

Because working people are to busy earning a living and going to work rather than taking every day off to protest and go to council meetings and bitch.

““Builders could come into a neighborhood, buy all the buildings, pay a very small percentage fee to the city, and force everybody who was living there to move elsewhere.””

were all the questions asked by the audience as ridiculous as this one?

Builders will “force everybody to move”? That doesn’t make a lick of sense.

Guest
Asking for a friend

Why should someone be forced to build below market housing? They tried this in SF and they stopped building.

Umm, hello. The city planners and elected officials are THE ONES allowing sanctioning all this development. Yes, the folks you vote for again and again. Take a good close look at the section 8 housing in your area and tell me how great they look and how busy the residents are. I think the term “upward mobility” is foreign to you, and them. I feel the day when we repeat what Red China did not that long ago is closer than many think; wear uniforms. Like at Catholic schools. Then, we’re all the same and you FEEL good. Developers: bad. Government: good/hero’s. Us: slaves

Uh… What? Take your meds and go back to Breitbart.

Boris should pause to think next time he considers calling something else “ridiculous.”

Those who sell the property move willingly and make lot of money. Get over it.

“There’s something broken in our system, that despite doing better work at the local level, there are more and more people entering homelessness every year,” O’Brien said. “

But it couldn’t possibly have anything to do with you and the city council’s boneheaded and enabling policies, could it Mike?

LOL Nothing is broken. It’s business under capitalism. If you work for Amazon or Boeing or Salmon Bay Sand and Gravel or even Cupake Royale your income comes from business/capitalism and it is working exactly as intended so cry me a river.
Affordable housing will never ever ever be built in Seattle again. There is no right to live in Ballard or Seattle.

Mike thinks he’s “doing better at the local level”? If this is what success looks like to Mike, I’d hate to see what he considers failure. If it wasn’t for failures, Mike would have no successes at all.

Those FAR ratios sound like they are intended to cram more 3 story buildings per lot. He says they are to discourage McMansions that are both tall (3 stories) with big footprints, but nothing is mentioned about the number of 3-story small-footprint townhouse could be built.

So to be a city, we have to degrade our quality of life and live in tall boxes? If you love that kind of city, then move to Chicago or New York. Leave Seattle alone.

Ballard isn’t a suburb anymore. Move to Auburn or Bainbridge if you want a large yard anymore. It’s not fulling anyone, you’re concerned that if a row house is built a black or brown person might move in. I heard Boise is nice.

Why are the homeowners with the historic craftsman and Victorian homes selling to developers rather than taking a little less money and selling to people that would live in the house? It’s not like anyone is forcing them to sell to developers.

Why should they? They owe you nothing.

Wah wah wah, something in the world changed. Get used to it grandpa

You could buy up the hood and keep those with different taste out. Save your pennies.

How about you move to Calcutta if you like slums and homeless so much?

This is the problem with baby boomers, they are so f-ing stupid. Go back to forwarding emails from Nigerian royalty and getting angry at facebook.

My family ancestry runs through Ballard, but I’m from View Ridge. The new people tore town almost every single 1940s and 1950s post-war home on my block. Boxy, gray McMansions with concrete retaining walls instead of a real landscaped rockery replaced them. The McMansions are literally 30 feet tall and are big enough to house 5 or ten apartment units.

And this matters to anyone other than you why?