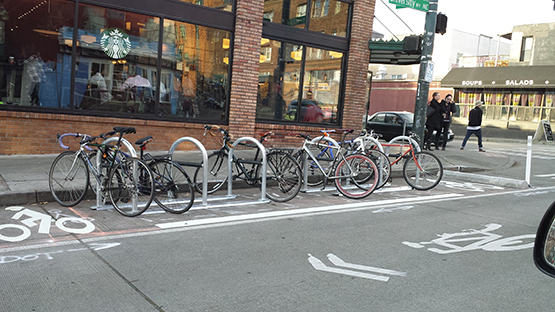 Seattle is adding hundreds of bike racks around the city, some of which will be placed in Ballard and Fremont.

As SDOT’s Joel Miller told MyNorthwest, the city will increase the bike rack capacity by 20 precent, which means roughly 800 new racks around Seattle, paid for by fees charged to bike-share companies.

According to city guidelines, each of the three bike-share companies in Seattle — Lime, Uber, and Lyft — are allowed to have 6,666 bikes on the street, and must pay the city $50 per bike in operation. Of that, about 40 percent will go to pay for the new bike racks.

The racks will be strategically placed with bike-share in mind: most of the racks will be placed near transit stations, and busy bus stops. :”And also in the urban villages and centers where we see a lot of use …. the University District, Ballard and Fremont area, definitely downtown and Pioneer Square. Those are some of the urban villages we saw a lot of use in the (bikeshare) pilot,” Miller told MyNorthwest.

The new racks will be intended for all bikes, with an emphasis on discouraging poorly parked bike-shares.

As a cyclist, this is wonderful news! Will be great to have more places to park my bike, or bike share bikes when I ride those. Also will be good to decrease the amount of bikes taking up space on the sidewalks/bike paths. A solid way to tidy things up without overreacting and demanding all bike shares leave the city.

The bike shares are kind of stupid, for the simple reason we are not a flat city and Seattle drivers have the worst case of off-the-boat-can’t-stop-texting-Mumbai-in-my-Cooper-Mini of anywhere in world. Plus, the winters dramatically thin out the numbers of cyclists on the road. Better to get to work in one piece than end up crushed by some narcissistic cat mom who can’t do anything but take left turns.

Why do you start with hatred? Have you even tried riding one of the electric assist bikes? They essentially flatten the hills. Also, your racism is THICK today. Or maybe I misunderstood your comment. Could you explain your full first sentence? If not, would love for this to be the comment where I get to finally see Geeky Swedes ban you. Seriously, your fear of everything different than your tiny bubble is so strong it makes you into something I assume you don’t want to be.

Libtard parody 5/5 stars!
Obviously you’ve never driven or ridden a bike in SLU lately. Do you get a rush in your ovaries trying to get people banned for, you know, having eyes that function and a brain that fires normally?

Why do you use derogatory terms so frequently? Did you grow up in Rush Limbaugh’s secret dungeon? Also, please explain your comment in your first sentence. Tell me how you weren’t being racist. Also explain how your 3rd sentence in this comment isn’t being misogynist. I’m not trying to get people banned, I’m trying to get YOU banned. Because you are the most hateful creature on this blog and you contribute ZERO to our community. You break the community’s rules in every single post.

Explain your comment about Seattle drivers, and explain how it wasn’t racist. Also explain how your previous comment wasn’t misogynist. Can’t do it can you? Is that too hard? Does Uncle Buck have trouble accepting reality that he can’t even lie himself out of his own pile of hate?

You never answered my question about your ovaries. Sorry if my use of the word “flat” somehow triggered you. Personally, I prefer more lithe figures anyway, so take heart!

Hey Uncle Racist, your forgot your white pointy hood. Don’t forget your blackface next Halloween! You seem to not know how to read, because you have misunderstood repeatedly how to explain that you’re not making racist comments. How good does it feel to see your kind is dying off?

Attacks on other posters violates the rules of conduct of this site. Please try to act with at least a bit of civility.

flugger, it doesn’t help your cause to immediately jump to white hood comparisons. You come off as triggered by Uncle Buck, yet you immediately, after some near-shouty replies, resort to lowest common denominator ‘you’re a vile, evil, KKK person!’
You don’t know that, and you shouldn’t feed into Uncle Buck’s baiting. Plus, you’re coming off no better than him when you do that.

I think it will be great if we could have a conversation without calling people we disagree with “Hitler” or “a member of the KKK”. People have different opinions and maybe, just maybe, you might learn something from someone who has a different opinion than you.

Uncle Buck is the remnant of the Great Sockpuppet Invasion of 2018. Reasonable discourse is impossible. If you try to use facts and evidence or ask him to justify his opinions, he devolves into a two year old hurling insults.

Attempting to have an intelligent debate with him is futile, as that’s not his MO.

Ah good. Just checking is to see that now I’m “literally Hitler/KKK” for making a joke about the foreign recent arrivals’ driving-while-texting.

You liberals are embarrassing. Oh and LOUIS CK IS RIGHT AND DID NOTHING WRONG. And for the record: I’m not racist because my 16 year old wife is brown. THERE!

lol, troll has been triggered.

UB- if they are “kind of stupid” then why are people using them?

Ah good. We call these “bike liberation centers” now because our vulnerable community members can help themselves to any of the bikes they wish.

Pro Tip: don’t leave your bike locked up in Seattle for longer than an hour if it is anything nicer than a Walmart beater, and be sure to run a cable thru the wheels if they are quick release or they will end up piled up near some junkie tents.

Is there any bike rack installation plan which will show where and what types of racks are to be installed? Or is this just preliminary planning at this stage?

There is no plan other than disjointed press releases coupled with a search for someone to fabricate and install the racks who 1) can be touted as a diversity expenditure or 2) has political, financial or familial connection to Mos Eisley-on-Elliot Bay (that wretched hive of scum and villainy known locally as Seattle City Hall). Budget, schedule?… fugadaboutit.
That’s the Seattle Way!

Bike racks are fine, but placing them where they block a right turn lane is just another part of the war on cars. Put them on wide sidewalks.

…just another part of the war on cars.

Thanks Dori Monson, I needed a good laugh this morning.

Matt – many of the newer bike rack installations have been created in the 30 foot no parking area in front of stop signs. That is a good thing for both pedestrians and drivers.
https://www.seattle.gov/Documents/Departments/SDOT/ParkingProgram/CanIParkHere_Brochure_English_20161101.pdf

More bike racks, and encouraging more people to ride bikes is nothing but a positive thing for our city. I commuted by bike from Ballard to downtown for 15 years, and was happy to see the number of other cyclists increase dramatically over that time. The better infrastructure we can create, the more those numbers will increase, and the better off our city is.

Sorry, I’m not riding a bike in Seattle traffic. I prefer to die a slow and natural death.

C’mon it’s cool to sacrifice yourself on the altar of your liberal ideals. Everyone is doing it!

Will they get use is the question or will the bike share companies continue to dump them all over? I don’t ride them but I am tired of stepping over them. Between the bikes and sidewalk homesteaders, its a veritable minefield out there.

I wonder how long it will be until someone calls these “hostile architecture.”

“Hostile” architecture? If a bike corral triggers someone, time for that person to go on a permanent time-out.

I give you the perpetual hand-wringers at The Stranger (and City Council members O’Brien and Mosqueda)… https://www.thestranger.com/slog/2018/03/09/25894114/seattle-removes-anti-homeless-bike-racks

This is just too good to be true, your hard earned tax dollars at work.

Wow. I’ve not quite read everything, but this gets me a little closer!