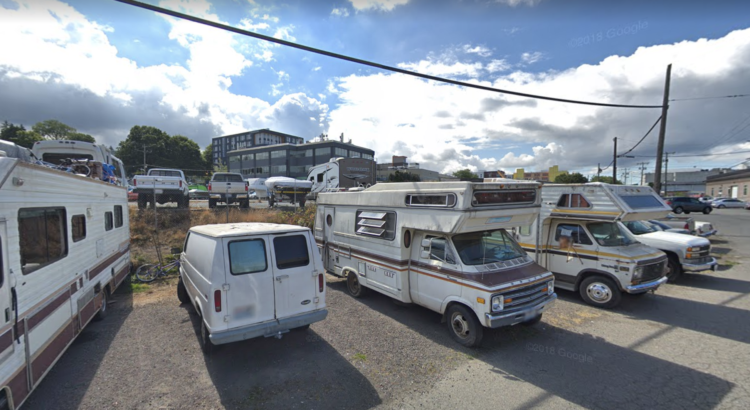 A 52-year-old man has been arrested for dealing drugs out of his RV.

According to Seattle Police, they’d been investigating the man, who they say was selling drugs from his RV in North and West Seattle. They say investigators bought methamphetamine from him on several occasions.

On Jan. 18, his RV was located in the 3400 block of Thorndyke Ave West. Officers served the man a warrant and arrested him.

Photo from July 2018, Google maps street view of the 3400 block of Thorndyke, a popular place for overnight RV parking

NOOOOOOO! this cannot be true – in fact the city has said many times these are fine people and just need a cheap fix *i mean apartment*

Huh. Nice town we have here. Big thanks to the social justice morons and the City Clowncil.

Sorry to burst you tiny “told you so” little bubble, but this happens all over the USA now, and not just unique to Seattle, or blue states.
http://lmgtfy.com/?q=RV+heroin+busts

However, like you I DO hope we can elect whole new council, and other elected officials, who have the guts to do something about these RV and illegal encampments, as well as make efforts towards cleaning up our city.

Huh. So you agree with me but bash me. LIB LOGIC

Yeah, I agree with you about the council, the RVs and crime, that’s it. Otherwise I find your conservative politics to be weak, boring and self-centered, and your internet trolling to be childish, unhelpful and just a sad desperate plea for attention.

Haha. Self centered? You guys invented 5000 gender identities for yourselves that fight biology, and do nothing but post selfies on social media.

Boring? Yeah it is boring to be a non-neurotic, productive member of society. The blue hair and fake protests don’t make you interesting, and forcing us “boring” people to pay for liberal policy disasters we warned you about 2 generations later (those single moms are crime vectors look at the stats) while pretending everyone with whom you disagree is a “nazi” is about as self-absorbed as you can get.

It isn’t a “plea for attention” stating how liberals in Seattle are enabling crime, vilifying and insulting native citizens, and grandstanding against the ELECTED PRESIDENT to posture themselves as morally righteous-yet-cool aka “F you Dad!”. You guys are the LORDS OF TWITTER narcissism with your “look at my edgy sexuality”. Get over yourselves.
Democrats decided at some point to become the official mouthpiece for the entertainment industry. Really let that sink in.

We get it. I’ll take my taxes back now thanks. No? See that’s the problem, Kid.

Perfect example of weak politics and childish trolling, thanks!

May the fleas of 1,000 cats infest your home

Good luck with all these created elite Ballard fools. Don’t you get it, they along with their hand selected theoreticians all know what’s best for us. Without this chaos, their permanent underclass, WTF would they have to do? Who would they have to tax? Seems to me lowering the bar again and again then accepting whatever comes your way is the norm today. I see dumb people.

Please go on to explain to us all just WTF “conservative politics” are to you. Perhaps merely disagreeing with what you’ve been conditioned to feel/accept maybe? You see, we are busy running our businesses and taking care of families/seniors and not dealing heroin and or stealing your shit. Us right wing whack jobs, the 2-3-4 of us remaining are simply NOT the problem here pal. It’s what you vote for again and again. foisting pure garbage on the area, and the rest of us. But go ahead, blame the conservatives. I guess that makes you feel good about things, and yourself. Never mind MOB, Sawant and the other ass clowns YOU voted for. Your shrink can explain to you exactly what “projection” is.

That should help improve sales of meth and heroin at the neighboring RV.

Thank you SPD for getting this dealer off the streets!

Let’s get the rest of them off the streets too.
How about a drug detection dog as part of all One-Night counts, Navigation Team visits and all ‘outreach’ efforts? I love that terminology- be sure you got sturdy gloves on when you do that reaching!

Everybody can help here. If you don’t want to call it in and deal with the 911 operators SPD has a very handy online tool for making a ‘Narcotics Activity Report’. One of the many incident type you can report online. I have seen them respond within 2-3 hours.

Is this one of those ‘survival crimes’ Mr. O’Brien is always talking about?

Oh, so it wasn’t a survival crime? I must have been downvoted because it was just a ‘regular’ crime, in that case. My mistake.

Liberals love heroin and meth. It dulls the pain of their miserable existence.