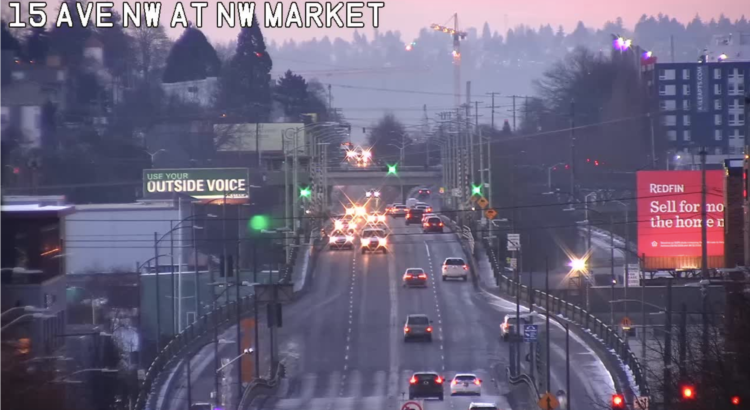 11:34am: It’s a beautiful sunny — and frigid — day in Seattle. Here are some photos from around the neighborhood…

Kristina sent us this one of her snow-covered flowers: 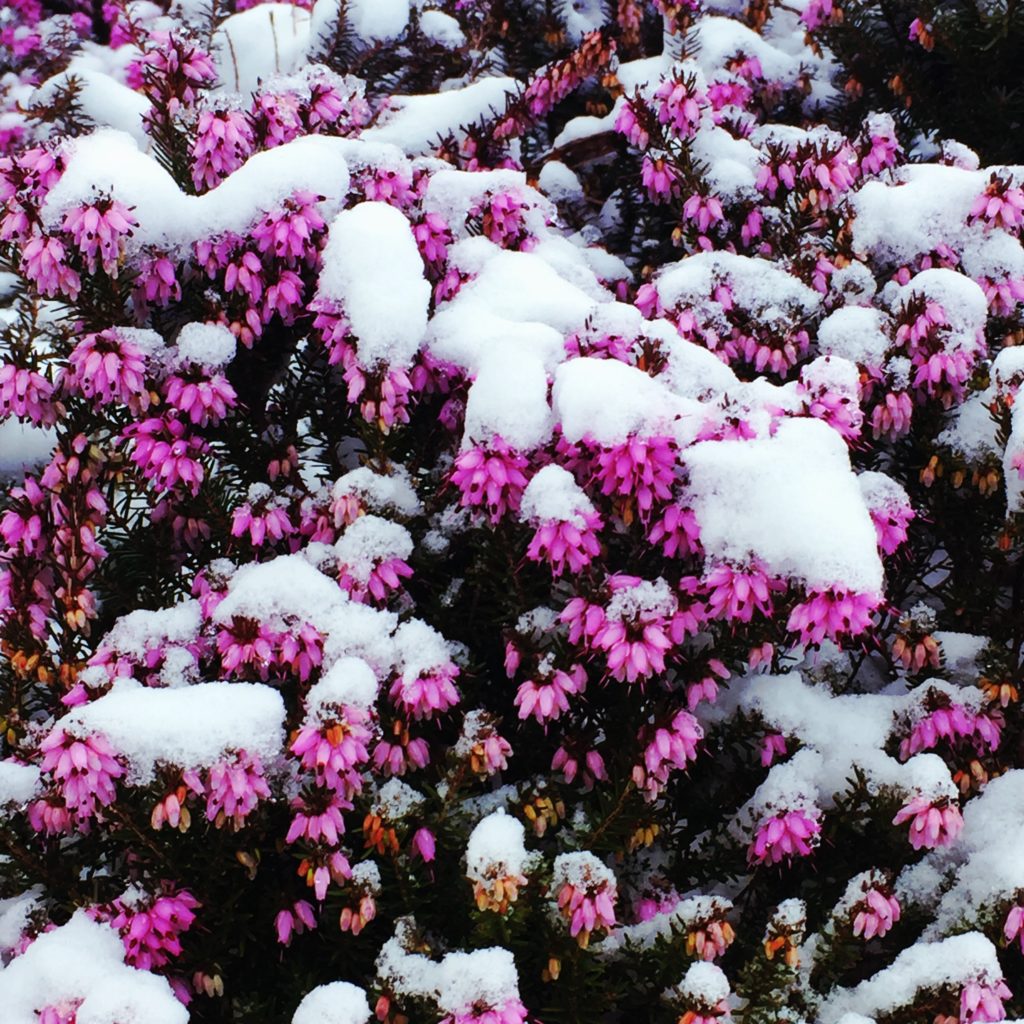 And some mailbox art captured by Mary Beth: 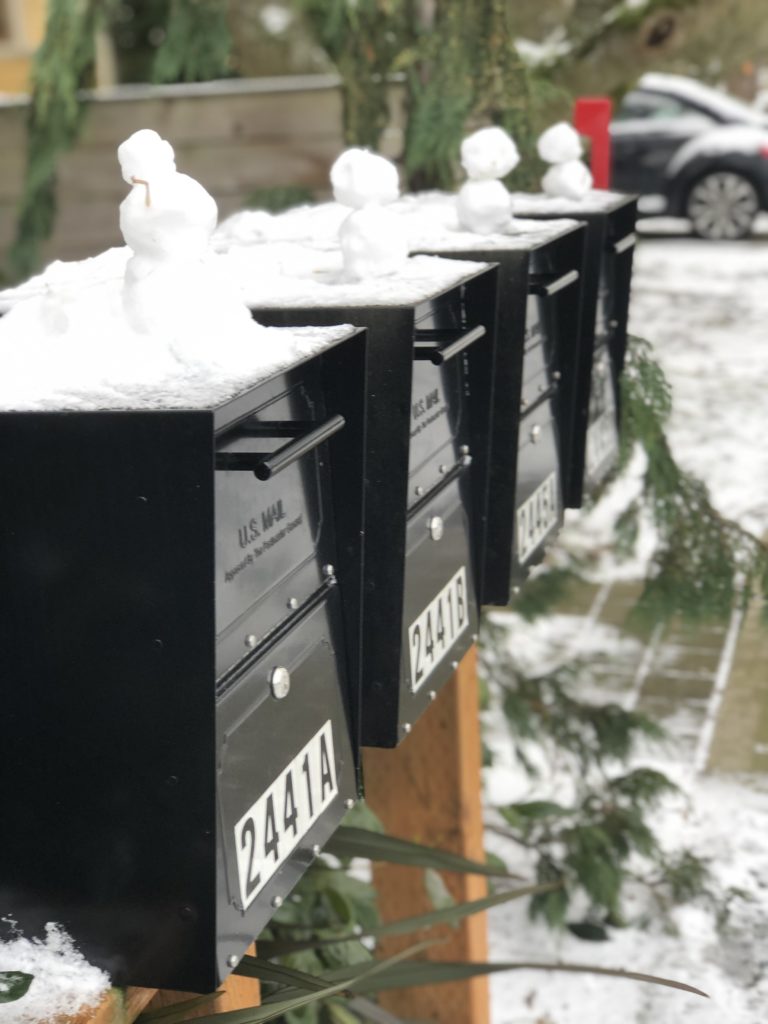 Sled parking available out back! We are open regular hours. Story time is at 11:30am for our little friends Tuesdays and Thursdays. Stay safe and warm, thank your baristas and bartenders for carefully getting to work! #seattlesnow #snowday #tuesdayvibes #hygge #crownhill #ballard #storytime

8am: There have been some questions about road conditions around Ballard after last night’s (and this morning’s) deep freeze. Main arterials — 15th, 24th, 32nd and Market, 65th, 80th, and 85th — have all been serviced, while side roads will be more slippery. 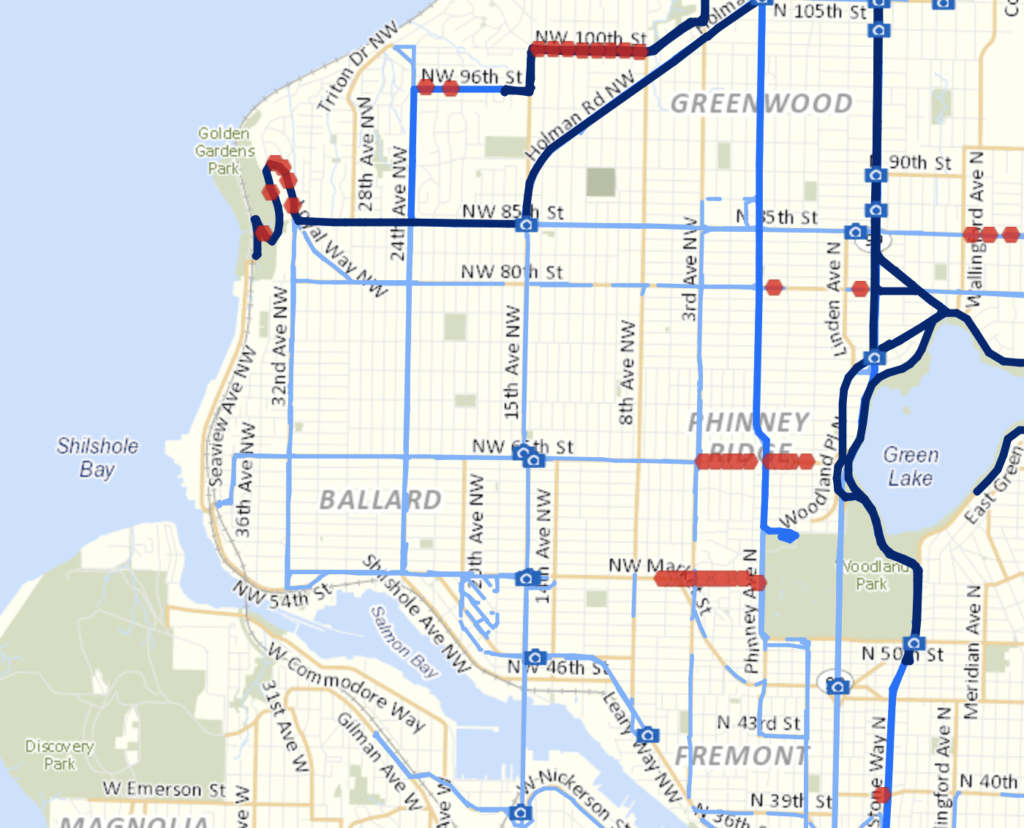 The map also shows “obstacles” or road closures, most of which are on the steepest streets — roads leading to Phinney, plus the road from 85th down to Golden Gardens. Those streets should be avoided.

A few reports are coming in from the My Ballard Group, including one from member Amy, who said the 96th Ave NW hill to 15th Ave NW by Swanson’s Nursery is treacherous. “Even the plow got stuck here for 20 minutes,” she wrote.

Robert, who was commuting to the U-District, said his drive on 80th to the northeast side of Greenlake and over the freeway on 65th wasn’t bad — only the side streets were slippery.

And Brianne, who lives at Shilshole, said it was icy along Seaview Ave from the railroad crossing to the marina last night.

“All routes are experiencing significant delays this morning, trips are all on snow routes and please prepare for longer waits,” explains Metro Transit. “Our operators will do everything they can to keep their trips moving.”

A look at the traffic cameras shows more activity this morning and fewer accidents compared to yesterday, but less traffic for an average morning at this time. Members of the My Ballard Facebook group report that the main arteries are clear with occasional patches of ice.

The UW has canceled classes and suspended operations today. North Seattle College is opening at 11 am on a delayed start.

LOL. Another shutdown. We all know it’s Trump making it cold and snowy. He’s got the power to do this and much more. Soon humidity will come to an end as we know it.

Oh, don’t worry!
“Snowfalls are just a thing of the past. Children just aren’t going to know what snow is.”
The experts spoke more than 15 years ago on this subject. Please enlighten yourself.

The fact that schools are closed purely because the roads didn’t get properly cleared is truly absurd. That’s a failure of city government to perform a basic function.

The schools are closed because of the pearl clutchers in Magnolia. Can’t have their little babies being cold.

we live in a city that only gets something like this every 5 years or so. 2 days cancelled to err on the side of safety is actually a success of city government. take a deep breath.

I just think we’re setting the bar too low if 2-3 inches of snow can’t be cleared from most roads in a day. Particularly with more snow in the forecast later this week. Maybe the city should be more proactive with salting. No quibbles with things being shutdown yesterday, it was not fun driving to work yesterday and I would have preferred to not have had to go in. But mass closures today seem like they could have been avoided with better preparation. And don’t get me started on all the folks that don’t shovel the sidewalk in front of their house. There’s some crazy slick sidewalks out there! Which, again, is totally avoidable.

No way am I storing a bag of salt and a snow shovel in my rental house and moving it every year for the chance I’ll have to use it 5 years from now. I get your point about the removing the snow, and the snow was removed from the major roads. There are a LOT of side roads. Unless we want to pay 3x as much as we are currently for snow plow drivers and salt, it’s not going to happen. Typically tax increases bring a giant wave of people screaming that infrastructure should just work flawlessly without having to pay for it.

Dump reactionary comment. Do you know what it takes to clear ALL of the roads of ice? Caution is a good thing.

Seattle is a large city with a lot of hills. Roads needs to be safe for buses and students in ALL neighborhoods to get to school or ALL schools in the district must be closed.

We get very little snow so the cost of clearing all the roads is not a good use of funds. Each school year has a few snow days built into the schedule; occasionally they need to add extra days to the end of the year to make up for too many snow days.

I understand your frustration but the safety of children around the city, in every neighborhood is important.

Don’t worry Folks, Seattle Public Schools will be doubling up on their communist indoctrination when classes resume.

Don’t worry Folks, lil bucky will be out advocating for murder of indigenous people whenever he leaves his house.

We deleted several comments that violated one of our comment rules that forbids repeated inflammatory posts. (Any replies to those comments also disappear when the offending comment is deleted.) Repeated violations will lead us to ban the user.