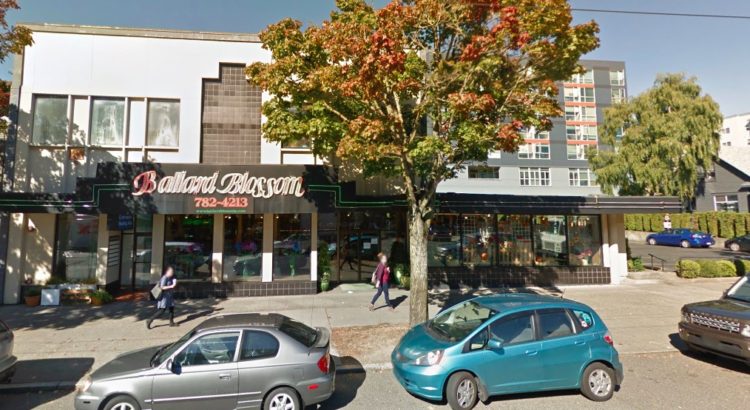 The building that’s been home to Ballard Blossom for 35 years is slated to become a 7-story hotel.

Ballard Blossom, which first opened in Ballard in 1927, has been at their current location since 1984. The florists plan to reopen in a new location, owner Rachel Martin tells My Ballard. She says the buyers of the building (1766 NW Market St) will allow them to continue leasing the space for the next several months while they work on finalizing a new space.

The hotel plans include 120 rooms, with a ground floor hotel lobby and amenities. There’s one level of below-grade parking in the plans, with space for 30 cars and accessible from the alley.

We’ll update when we know more about Ballard Blossom’s plans, and the timeline for the new hotel.

Nice! More places to stay for in the heart of Ballard for people visiting is a great thing.

I agree! Sure makes you wonder what’s going through the heads of people who downvote this type of comment.

Love the idea of a new hotel in Ballard. Confused that it will have 120 rooms but space for only 30 cars? Ballard needs a multi level parking garage. Perhaps having it built in the Yankee Diner location?

There already is a multi level parking garage, it’s on Tallman ave NW, across from Swedish.

this is Seattle – everyone will be expected to ride their bike to the hotel.

Another possibility is just to wait for the generation that has become dependent on their car to no longer be driving and this will work themselves out.

But seriously, in like 10 years there is a chance that no one will own there own car, so does seem a bit stupid to overbuild a bunch of car storage units.

The link you provided predicts private car ownership will drop by 80%, not 100%. I doubt that little pod is going to pull my boat to Eastern Washington and launch it.

Ballard is in need of affordable hotels for visitors to stay, but including only 30 parking spaces limits where even the staff might park let alone guests who have cars and want to continue on their trip to Olympic or Mt. Rainier National parks. Can’t take a bus or easily bike to either of those locations. It’s not a question of car dependency as much as accommodating tourists who are traveling by car.

Forget the guests, after all, they’re just tourists.
The important thing is the virtue signaling. That’s what really pays the bills!

And a bit off topic: Mike O’Brien dropped out. Don’t ever forget that and SOME of us on this wonderful site/blog helped make that happen! Yay for us!! Something to ponder: did Mike tune in and turn on before he dropped out?? Hmmmmmm….

I don’t believe Ballard Inn has any parking of its own so this is not unprecedented.

Your reaction to my comment shows I knew exactly the meaning of ‘virtue signaling’ and why it is in use today; i.e., to trigger an SJW!

“Virtue signaling” is a term used in attempt to shame compassion while also discrediting it as being disingenuous. It says more about the user than the target. People who use “virtue signaling”, “sheeple”, “libtards” and the like can be discounted as thinking individuals; they are simply monkeys repeating phrases that they think makes them look clever.

I agree. Come on people get with the times!

Sorry, Toad, I guess I have to break it down for you further. No one is triggered by you using the phrase virtue signaling. You are simply broadcasting to people who think like you that you’re one of them.

I agree that having 25% parking for rooms seems less than ideal. From what I’ve seen at local AirBnBs most visitors are looking to enjoy the greater region not just stay hyper local. It makes more sense for downtown hotels to have limited parking to me.

I guess we’ll see how it works out. Happy to have a new hotel near by though!

AirBnb is an evil corporation that steals from local hotel workers. We don’t want them in Ballard!

As someone who moved here from the UK, I still find it interesting that people in Seattle are so dependent on the personal automobile. As strange as it may seem, there are people that travel all over the place without their own car. One can take public transit, rent a car and car share as well as walk, bike share, bike rental. We don’t have to be dependant (or dependent) on a personal vehicle all the time.

Ableism.
Many who travel to THIS region, or in THIS country, rent cars to get around. Please don’t be surprised by this, it’s a big country. Happens in Canada too!

There is a couple who live on my street from the UK, and they drive more than any of my neighbors.

I now get it. We all need to be more like where YOU came from; a tiny country that used to be free too. You can drive across IT in a minute. Umm, we fled that crap and started America. Where then will we go next to flee your government and it’s heavy fisted actions here? As in “the British are coming, the British are coming”? An auto used to equate freedom. Today, according to some, it’s a sin and an electric bike means you’re cool, hip, and trendy. You claim “we don’t have to be dependent on a personal vehicle”, yet are totally will to become a slave to and for government, bending over and grabbing ankles at every opportunity. So tell us all honey, “who will be there for you when you’ve had enough”? WHO? I see created slavish locals. The History channel is on daily and you STILL have a chance to learn from history. Learn about all those wonderful “ism’s” and what they did TO it’s people. But no, idiots like you feel that it was just the “wrong folks instituting them”, right? Yup. Millions died too, MILLIONS.

When did you quit?

Airbnb’s in Ballard will have more competition!