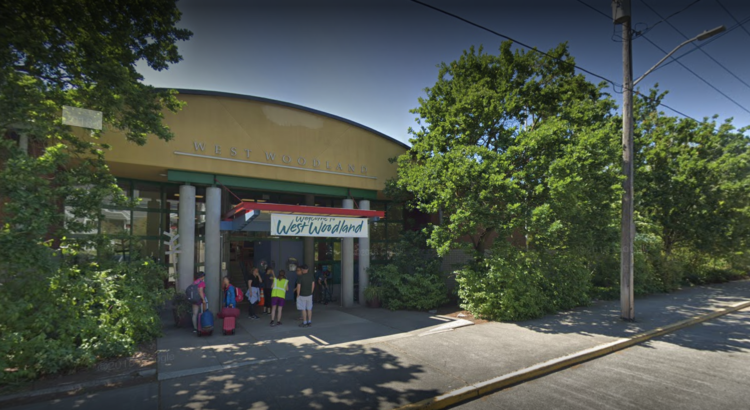 West Woodland Elementary School has been nominated as a city landmark.

According to History Link*, West Woodland, which opened in 1905, was once just a small wood-framed portable school that stood on leased land near the base of Phinney Ridge at NW 58th and 3rd Ave NW. Then known as Ross Annex, it housed the overflow of students in grades 1 and 2 from Ross School, which was just down the street at 3rd Ave NW and NW 43rd St.

The Seattle School District moved the portable building to 5634 5th Avenue NW in 1908, and was renamed West Woodland in 1910, derived from a shortening of “west of Woodland Park”, according to History Link.

The school’s site was enlarged in 1912 with the purchase of six new lots, and eight more classrooms and meeting rooms were added. The growth continued through the 1920s — West Woodland was the largest elementary school in the city in 1929-1930, with over a thousand students.

The population of the school swelled over the next few decades; in the mid-60s, there were 1,200 students and portable classrooms covering the playground.

At the urging of parents worried about the school’s size and structure in the late 80s, the school board enlarged the school’s site and built a new school building, which opened in 1991. The new structure is smaller than the 1910 building, but the playground is larger.

The nomination will be considered by the city’s Landmarks Preservation Board on Wed., May 1 at 3:30pm at Seattle City Hall (600 4th Avenue, Floor L2) in the Boards & Commissions Room L2-80. The meeting is open to the public and the board will be accepting comments. Written comments may be submitted to Seattle Landmarks Preservation Board, Seattle Department of Neighborhoods, PO Box 94649, Seattle, WA 98124-4649.