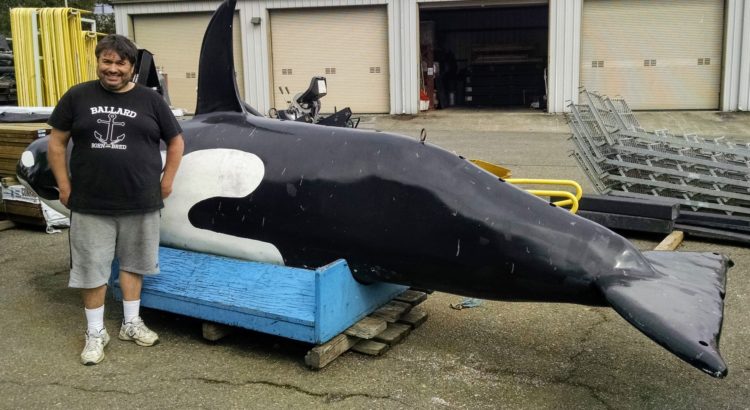 “Fake Willy”, the life-sized orca whale that was once used to deter hungry salmon-eating sea lions at the entrance to the Ship Canal, has just been officially donated to the Ballard Locks.

As the story goes, Fake Willy was purchased by Twisted Radio station in the 90s after listeners helped raise $3,000 to buy the orca replica from a fish farmer in Scotland. Salmon numbers were dwindling at the time because of a famous sea lion bandit Hershel and his hungry cohorts; the fake orca was meant to deter them.

Held by chains, workers would raise and lower the 16-foot-long, 200-pound orca in the water “like a marionette”, Katherine Gammon writes in her detailed history of Herschel, the Very Hungry Sea Lion, published in Hakai Magazine.

Unfortunately, it didn’t work. The sea lions kept coming, and Willy was taken out of commission. Rudy Pantoja (AKA Rudy from Ballard) was tasked with the role of caretaker.

After Willy bounced around a few Ballard businesses, Rudy decided it should reside at the History House in Fremont, looked after by Suzie Burke.

“I never wanted to have the whale leave Ballard,” Rudy told My Ballard. And so, last year when Rudy was approached by some Locks workers who asked about displaying the whale, he agreed to move it permanently.

“It’s been with me since 1999. I’ve had plenty of offers of people wanting to buy it, but I wouldn’t give it up. I kept it — it was important,” Rudy said.

“It’s back where it belongs.”

Fake Willy? I thought that was David Preston’s nickname!