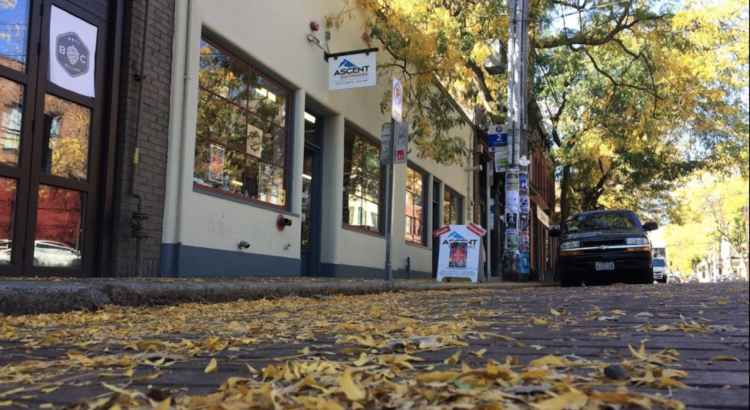 The outdoor gear shop Ascent Outdoors and bike store Ascent Cycles on Ballard Ave both closed down over the weekend.

The closure was unexpected, and a brief sign on the door of Ascent Outdoors is the only message so far from the owners.

“We will miss you,” they write. “Ascent Outdoors is no longer open for business. Thank you for your support over the years.”

The company, which recently celebrated its 23rd anniversary, moved to Ballard Ave in 2001 under the name Second Bounce, which then changed to Second Ascent. The company’s bike servicing and shop moved into its own space in 2016, which became Ascent Cycles. In 2017, Second Ascent rebranded to become Ascent Outdoors and just last year, expanded to Redmond, which has also now closed.

No word yet from the owners, but we’ll update with any new information.

Seems almost impossible. They were always busy and had a backlog of bike work. I’m guessing they were priced out during lease negotiations and will be replaced by yet another high priced “casual” restaurant.

I can see it now. A sign in a font so desperate to be authentic it makes genuine antiques blush proclaims “Sheads & Dumbwaiters” Small plates, local brews, and gourmet aperitifs in a style so earnest it defies metaphysics – A California Corporation

Interesting. That place was always super busy. Priced out is one possibility, poor money management (name changes/expansion to Redmond/growth of physical space) could be another. Regardless, this is sad for the outdoor community that took advantage of their services.

Oh no, this really sucks! Ascent Cycles was the best shop around, and now with both them and Bike Sport gone, Ballard is needing a new shop.

Ah good, more $20 cocktails with dogs everywhere and couples staring their phones across from each other.
#peakseattleculture

ah, bucky has made a return.

IF you think this is exclusive to Seattle, you need to travel more!

Good point, but Edog you gotta own the fact that we exported this hellscape of broken social interactions traded in for tech cash and dopamine hits. Muh dog babies loneliness epidemic

well that is disappointing. i didn’t spend a ton of money there but it was nice to be able to pop in for a propane canister or a freeze dried meal for a backpacking trip rather than slog to REI, etc

What a bummer! This was my closest bike shop. The other two good ones that are close is PIM Bicycles and Coffeehouse off Leary and 40th along with JRA up on 85th. I like the PIM shop even though it’s small the techs are spot on with fast turn around. It’s actually right on the Burke Gilman. Cool coffee shop inside the store so it makes waiting around for a flat fix not so painful.
JRA up on 85th has some great techs, and is a great option.

Agreed. I’ve had good experiences at JRA so it’ll likely be my new regular shop.

This is terrible news! Second ascent is/was one of the only useful stores left in downtown Ballard. I will be very curious to know what happened and how to get back all the gear I recently dropped off there for resale. The posted phone number is a dead end. Please post any information that comes along. What a heartbreak.

As a fellow outdoor gear store that started due to the inspiration of stores like Ascent Outdoors this is very sad. I definitely feel horrible about the employees who suddenly lost their jobs.

very unfortunate! i have sold to them and have about a $30 credit. does anyone know if they’re honoring anything?