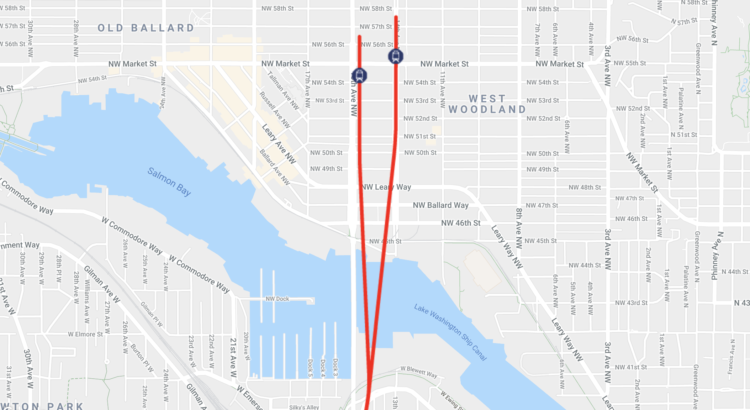 A tunnel under the Ship Canal is emerging as the preferred option for Ballard Light Rail development, despite its hefty price tag.

A group of elected leaders made the recommendation to Sound Transit on Friday after considering the various options for light rail development in Ballard, which also included an elevated bridge or movable bridge options over the Ship Canal.

The Elected Leadership Group, which consists of several city councilmembers, Sound Transit board members, Port of Seattle Commissioner Stephanie Bowman, King County Executive Dow Constantine, and Mayor Jenny Durkan, told Sound Transit officials last week that both the Ballard and West Seattle lines should be tunneled, according to KING 5. They also recommended against a movable Ballard light rail bridge, and against an elevated rail line in West Seattle.

The projected costs of the group’s preferred options would be over the estimated $5 billion to build the new lines — Sound Transit has referenced the need for third-party funding to be able to pay for the swelling project costs.

The question of the Ballard station alignment is still up in the air — there are plenty of opinions on both the 14th Ave NW and 15th Ave NW options.

Sound Transit board members are expected to vote on the recommendations in May.

Well, we have years now to ponder how this decision will ultimately play out. I recommend grabbing a good book and a glass of scotch. It’s gonna be a lengthy process!

Really hoping we do this right and go with the tunnels. I’m cautiously optimistic.

100% agree…tunnel is for sure the right way to go.

I agree! I would rather spend extra and do it right then have a rushed above ground job that turns out to be cheap, loud, and an eyesore. Look at Chicago’s loud rail system through neighborhoods. Lets plan for future generations!

So you want spend hundreds of millions of dollars to protect a view, when we have people living in the streets? Shameful.

Agree on the tunnel option!

It’s really a shame to spend the money on this extravagance when there are so many people in need of housing.

Light rail is needed here badly also. Both can be done if if we start taxing corporations and spending more wisely. What is really a shame is greed.

Well build it, but don’t steal money from others because an elevated track would be “unsightly”. Especially as it would make the efficacy of this worse.

The goal of the light rail is to get people around efficiently, not to be pretty.

With that logic, if you are a driver, you are stealing from those who don’t drive.

A tunnel here is not about being “unsightly” like the waterfront/hwy 99 tunnel, it’s about logistics and balance with the area roads, marine traffic, bike traffic, pedestrians, private business properties, and local residential properties.

1. The pedstrian thing is obviously bs or they would put this on 15th. They are trying to make it as inaccessible as possible.
2. “bike traffic” lol, yes BIG concerns here

It’s not about “stealing money” as your strawman suggests, it’s about spending money unwisely to appease the NIMBYs

“They are trying to make it as inaccessible as possible”

They need ridership funds, they are not trying to make it difficult to access.

Heads up, you are sounding like the NIMBY here. lol

Maybe you can see on the map above that 15th is in consideration. Unfortunately, you may need to waddle another block if they chose the 14th Ave location. I believe in you, you can do this!

It’s been clear for a while that 15th is on the chopping block. We could put the super expensive train in a super convenient location, or just royally screw it up.

Can you show me where on this map the Ebil Gubment hurt you, sweetie?

Well build it, but don’t steal money from others because an elevated track would be “unsightly”. Especially as it would make the efficacy of this worse.

Like how they dug a multi-billion dollar tunnel under downtown instead of replacing the viaduct, a cut and cover tunnel or a surface road (which they are doing anyways)?

We wasted a bunch of money on a tunnel, we’ll show them by doing it again.

A fixed bridge is the best option. Cheaper and will cause the station to not have to be buried way under Ballard. The worst case scenario is an underground tunnel, way under 14th that would dramatically decrease ridership.

The wasted money on a tunnel could be used to improve other parts of the line.

The fact that “improved views” is even brought up all is astounding, but very typical of Ballard.

cheaper in the short run, perhaps. how long until that bridge needs replaced? what about a tunnel? this is the typical american “do the cheapest possible method now” thinking that constantly gets us into trouble. how exactly would an underground tunnel that doesn’t get held up by traffic or boats decrease ridership? there’s underground stations on other parts of the light rail in the city, and these trains are packed constantly. i could care less about the views, and i’ll agree that part is typical. it’s about the speed of the train and the longevity of the transportation corridor for me.

A fixed bridge is the best option.

Except a whole slew of agencies and groups, include the Port of Seattle, have objected to the bridge due to perceived impacts.

Moving forward with a fixed bridge without reaching an agreement with those agencies and groups will result in lawsuits, project delays and increased costs.

A fixed bridge may be cheaper in an isolated vacuum, but cost estimates don’t account for external factors. The tunnel could end up being cheaper just because it avoids these potential delays.

Did we though? 50 years from now will we say that was wasted money? I know it’s difficult to look beyond your own nose, but do you really believe it was wasted money? Sure there were mistakes. Have we learned from them? Yes. Will we be digging as big of a tunnel with the world’s largest boring machine again? Not a chance. If you actually knew the facts you’d come at this from a different perspective.

I have no idea what you are talking about.

Hey maybe we can get the tunnel machine to hit a few pipes the SDOT diversity hires forgot about.

i mean at least the bright side is that there’s only one person on here as terrible as bucky, it’s bucky himself.

And apparently taking the “testosterone” pills that Alex Jones peddles on his show.

Please don’t make light of something that is a huge issue and benefit for those in a marginalized community.

Because Alex Jones’s pills are of course medically certified and FDA approved, right?

I don’t know, I don’t keep up to date with the stuff he sells. I guess you could fill me in?

Why don’t you ask your pal and confidant?

Aren’t you the one that is constantly asking people to be banned for posting inane things, then you post crap like this?

You were the one that jumped in to try to legitimize Alex Jones’s snake oil pills.

Ah yes, the comment thread that started with you “concerned” about building light rail when there’s homeless people?

Concerned about spending $300 million for no good reason.

For no good reason other than building out a mass transportation system to a dense area of the city that will maximize capacity and ridership and minimize the potential for future disruptions.

elenchos2 – you are also worried about the Nordic Innovation Summit breaking out into a violent racist rally… so all things considered maybe you shouldn’t worry about complex issues and leave it to those who have dedicated their education and careers to such matters.

What an elitist attitude. You guys are the people who elected Trump.

I don’t think my comment is elitist. I am concerned about your hurting yourself thinking about complex transportation issues considering the difficulty you had with some very basic concepts such as those below:

– Why are they holding a Ballard meeting in Sunset Hill? (in response to a post about a Ballard District Council meeting)

– I’ve noticed a remarkable improvement when they stopped letting Magnolia kids sit first chair. (In response to a post about a highschool band)

Draw your own conclusion, sweetie. If it isn’t clear then I don’t think anyone can explain it to you.

Nope. I believe in hiring qualified people. Ask any seasoned city/state employee and they’ll tell you the priority is superficial physical traits over qualifications…you racist.

I don’t think you know what that word means. You keep throwing it around, though you don’t know a damned thing about inequality and the history of racism in our country. Get a clue chud.

We could put a lot of buses on the road with $5B. Will people walk to 15th and Market to catch a train?

Yes it’s really a shame that the Ballard residents are exerting their privilege to pressure the city into wasting a ton of money on a proposal that will make transportation worse (The station would need to be much deeper with a tunnel). It goes to show this part of town is all talk when it comes to the real issues.

IK LONDON HOTEL RESIDENCY
IKLondonHotelResidency is a famous hotel in hydrabad which cater you with its great services and also have halls for corporate conference meetings. for more details visit us at :hoteliklondonresidency.co.in/ #hotels #food #banquets #corporatemeetings #iklondonhotelresidency

Sign the whole MyBallard crew up, we’re ALL coming over!!