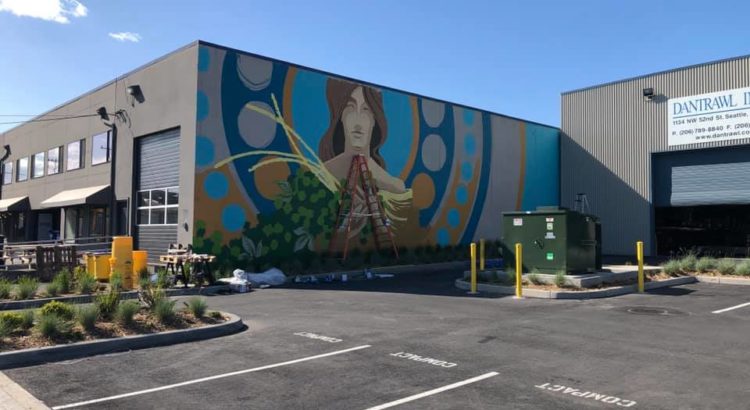 Ballard is getting more colorful by the day: a new mural is going up on the side of Obec Brewing.

The muralist is an Obec staff member, Jordan Atkinson.

“It has taken quite awhile to plan and organize this mural project, but it’s finally happening,” Atkinson writes in a recent Instagram post about the mural.

Obec tells My Ballard that it’s an Alphonse Mucha-inspired piece.

“Mucha is a Czech artist, considered to be the father of Art Nouveau. So it combines the Czech piece of our story (Obec —pronounced oh-betz) is the Czech word for community) with an homage to the local brewery scene, as it features the woman carrying hops and wheat in her arms.”

Atkinson has done plenty of murals before, but at 20-feet by 70-feet, it’s the largest he’s done.

The painting is currently still underway — Obec says he’ll be working on it throughout Seattle Beer Week, which kicks off tomorrow, May 9.

Thanks Anndrea for the tip!

I love this. More public art!

Umm, if they left the wall blank it’d be a target for taggers too. Maybe with a mural there it’ll be less of a target?

Studies have shown that murals are tagged less often than blank spaces. Many cities have commissioned murals exactly for that purpose. Of course, some yahoo is always going to tag whatever they feel like but in general, murals do reduce graffiti.

I do want to congratulate you on always finding something negative in every story though. Very impressive! Gold star for you!

Nice! I can’t wait to see the finished art.

I can see the cultural significance already!

The guy is clearly Jesus, this is quite a bit offensive (and possibly illegal)

Jesus was a black man. This is clearly a white woman. Please save your fake outrage for something else.

Probably needed something to bring in customers. They brew the worst beer in Ballard.