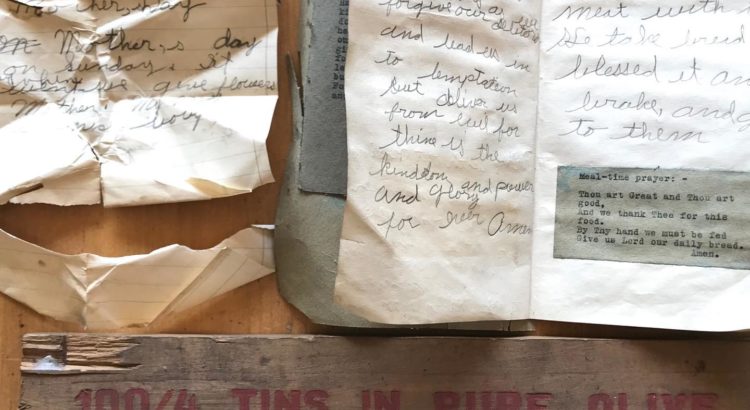 There are countless stories living within the walls of Ballard homes, and Laurie Zettler just uncovered a treasure trove.

While doing some construction on her home, Laurie found a collection of notes, photographs, a Mother’s Day note (very timely), and an old prayer book.

After some digging, Laurie learned that the notes and prayer book belonged to Dean V. Anderson, who was born August 23, 1926, an only child to the first couple who owned her home. The notes were written in 1936, when Dean was just 10.

Also in the collection was a high school photo of Dean from 1942 — he was a a student at Ballard High. Laurie says he was then drafted in 1944 and stationed at Fort Lewis at the end of the war. He then married his wife, Norma, and he lived in Ballard until his death in 1972.

Laurie says she learned that he worked at a company in Ballard called HB Co, which she says was on NW 68th St and 32nd Ave NW.

We’ve done some searching and haven’t been able to find any records of HB Co — if you know what it was, let us know in the comments below.

Thanks for sharing, Laurie!

I’m so glad she shared this little time capsule and her research. What a neat little window into Ballard history.

Maybe associated with Henry Broderick and his real estate company. Haven’t been able to find any indications he opened up a satellite office in Ballard, but he was using HB for his company name at different times in the early part of the 20th century.

A quick peek at the 1940 City Directory on the Seattle Public library site shows HBco as an abbreviation for Hemrich Brewing Company.

Horluck Brewing Company is also showing up. They were in Ballard with an ice cream shop…