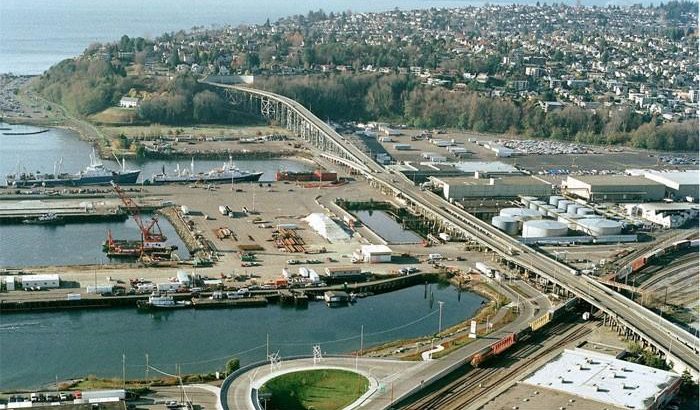 The 90-year-old bridge into Magnolia is nearing the end of its lifespan, and the cost replace it will likely require some federal funding.

In 2017, the Seattle Department of Transportation launched a study to look at viable replacements for the aging bridge, and distilled the options into four alternatives.

The study ranked the Armory Way Bridge (Alternative 1) highest, with the Magnolia Bridge replacement (Alternative 4) coming in second, and the Dravus St. bridge improvements (Alternative 2) in third. The ranking for second and third place was narrow, with less than one point dividing the two.

Cost estimates for the above projects span from $190 million to $420 million, which “far exceed” available city funds, according to SDOT. The department says they would need “significant outside investment” from state or federal partners to complete the work.

The Magnolia Bridge study is part of a ten-bridge study funded by the Levy to Move Seattle — the next bridge study will assess the Ballard Bridge, and will commence later this year.

If you want to learn more or provide input regarding the Magnolia Bridge study in person, there’s a community meeting on Thursday, June 6 at Catherine Blaine K-8 in the cafeteria from 6 to 7:30pm.

Just privatize it and have it be tolled! Get big government out of our lives!

Let’s trust our local government to do the right thing, to manage its assets prudently and responsibly.
How’s that working out? Better than when the South Park Bridge rotted in plain sight?!?

Haha, silly Andrew thinks there’s separation of public/private in cities like Seattle. Hey which one of your two dads works for Google and which one works for the city?

Maybe SDOT should open a Go Fund Me Page.

So they have money to study bridge design alternatives but no money to actually build the bridge? Haven’t they heard of asset management and putting money aside every year to pay for major capital projects, like bridge replacements?

Do they expect the feds to say “wow you need to replace a bunch of bridges and you have saved no money for the replacement and have no money to contribute, but hey will reward you for your complete irresponsibility and pay for the entire thing!”

We are a sanctuary city don’t expect the feds to help finance the bridges we need when we won’t help them do there jobs !

In the end, all available federal money went to pay for the tax cuts on the wealthy, so it’s a moot point.

I’m not surprised the city started cutting services to Magnolia once they announced they were going to start putting poor people there. This city only cares about the rich.

No, in true liberal fashion, they spend tons of my and your hard earned $$ creating more and more poor people. It’s their way of doin g business, and has been, for years. People are getting wealthy running big government programs, such as homeless, where many people behind that are making 6 figures a year. Replacing the bridge means paralysis by analysis, something else the left does well here, running costs way up. Finally, Magnolia USED to be a quiet conservative bedroom community. Today voting records show it’s some 85% “d”. As in limousine liberals. This city only cares about fleecing folks and ensuring heroin junkies they’re comfortable.

That’s some serious phychobabble there.

Just call the bridge “emergency homeless housing” and have it covered in some new levy for the wine moms to approve in a pink flurry. Just say it has something to do with “Stopping Drumpf” and get a team of community college woke engineers to build it cheap.

Maybe Durkan and the CC can hold a dedication ceremony beneath it. They say we’re due for major tectonic activity.