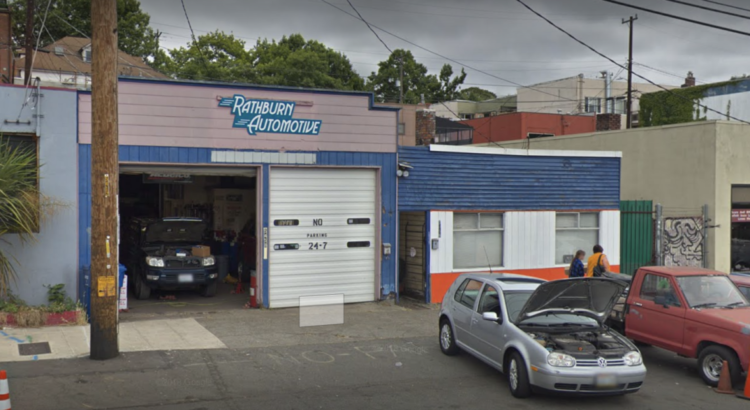 Ballard is about to get another taproom: Cloudburst Brewing has announced they’ll be moving into the Rathburn Automotive building at 5458 Shilshole Ave.

Cloudburst broke the news via Instagram, and said that they weren’t specifically looking for a Ballard location, but when they came across “an old & crusty garage from the 1920s”, they couldn’t resist.

“The state of the craft brewing industry is pretty nuts right now,” they write on Instagram. “And while there are many options and possibilities for craft breweries to stay viable, we’re choosing a path that allows us to keep our footprint small and our roots deep.

“This second space will allow us to sell more beer over our own bar (which is good for the brewery) while offering a better tasting room layout, an outdoor beer garden, and eventually some type of food options (which is all good for the customer).”

The taproom will be exactly that — no brewing will happen on-site. All production is staying at their current tasting room and brewery in Belltown, where they’re only four years into their 10-year-lease.

“We love Belltown, and as long as the second option terms are favorable, we hope to remain downtown.”

Thanks Carson and Alan for the tip!

This is really great news! They make some of the best beers in the NW and will be a great addition to the hood.

It’ll be a Bike Grease Pilsner not Transmission Fluid Pilsner because all the beer will still be brewed in the original space in Belltown which used to be Elliot Bay Bicycles/Davidson Bicycles.

Are they going to make an “old garage ale” and have old pictures of the building from previous years?

I heard somebody already stole their tip jar.
Should be fun to have pint of Hobo Lager and watch the Circus of City Failure parade by like on Market Street.

Great, just what we need….more beer. Breweries stink. They give off a hideous smell in the neighborhood.

“The taproom will be exactly that — no brewing will happen on-site. All production is staying at their current tasting room and brewery in Belltown, where they’re only four years into their 10-year-lease.”

I think the stink he was referring to was that of the privilege coming off the white people who drink there.

I understand you don’t care about things like bias or privilege, but it doesn’t mean the rest of us don’t.

If you were sincere about it you wouldn’t be so one dimensional. Your repeated, irrelevant comments on privilege and bias are actually racists and homophobic. One could even say that your “calling out” is infantalizing marginalized groups and playing into a white savior complex. You obviously either don’t understand the subject or you are mocking it because no one is that stupid.
If you want to be a better troll, start calling out your other personalities on their racist, homophobic, and misogynistic comments.
I will not be responding to you again. You are obnoxious and get your thrills off these petty games.