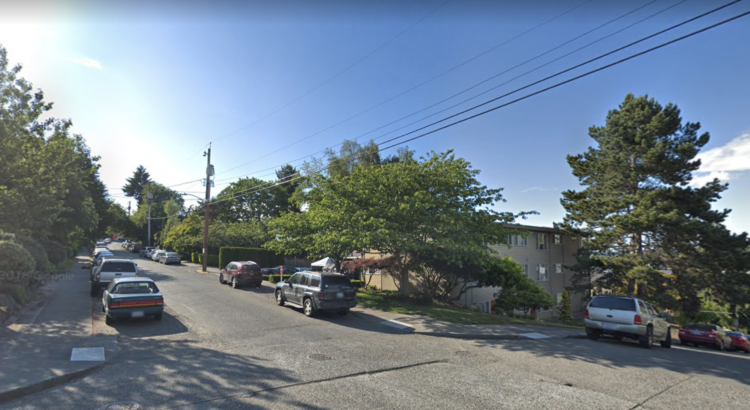 From the SPD Blotter:

Imagine being a person with the audaciousness, the self-confidence, the temerity to burglarize a home, prowl a car and then waltz into a college campus security office and ask to use their courtesy phone so you can call for a getaway car. And then when your ride takes too long, you leave and go steal a car. Well, one extremely—perhaps overly—confident 39-year-old man is now being held in the King County Jail after committing such an expanding-galaxy-brain series of escalating crimes early Monday.

According to the Blotter, a school security officer at SPU called police and reported a car prowl on campus. Police say the suspect stole backpacks, a guitar, amps, and other items from a car and stashed them on the sidewalk in the 600 block of West Emerson St. He also stole a TV from a nearby house, which he hid behind a garbage can.

He then needed a getaway car, so he took the most logical step: he walked right into the security office and used their courtesy phone to call for a ride. Police say he became impatient waiting for the car to arrive, so he left to steal a car and retrieve the items he’d taken early in the morning.

Thanks to surveillance footage, campus security were able to identify the man, and they called police.

Officers found and arrested the man, who was booked into King County Jail. He’s now being charged for theft, possession of stolen property, and vehicle theft.

Photo: 600 block of West Emerson St, where the suspect stashed the stolen items.

LOL, I might have to be with you on this one. Firstly, who ‘stashes’ just-stolen loot on…the sidewalk? Like, so someone else can walk up and take it? Secondly, who calls Uber for your getaway ride? That would have been an interesting conversation “excuse me, we need to grab this guitar gear. Oh wait, I also left my TV behind a garbage can about a half-block up the road”. Boy howdy, this sounds like an interestin’ feller!

He’ll be out on the streets tomorrow, good read though.

Yes, back on OUR streets with newly acquired balls AND a new puppy from the mayor for not killing anybody, yet. Sad that this is the new normal and many are becoming numb to it. Easy way to begin true accountability though; elect a conservative to lead, and not manage the decline. Until then, the limousine liberals just yawn and hope. Hope this goes away and doesn’t happen to them, their stuff and their kids.

And your evidence of that is what now?

Turth, you and your kind are evidence enough of why Paintking is correct.

In 2014 that Ybarra guy went on a shooting spree at SPU and was stopped by a brave security officer, I believe. It’s sobering that since then they haven’t improved their security, and are victim to “Trailer Park Boys” level criminal masterminds who simply ask for favors from officers and emergency workers while in the middle of crimes.
Reno 911 etc.
Clown World Seattle 2019

C.H. – He was stopped by Jon Meis, a student at SPU at the time and a safety monitor . Security officers arrived at the the scene after Meis had bravely tackled Ybarra to the ground.

Yes your point is?
Yes we all know vigilante justice is required in Seattle. Even you libtards grudgingly admire those who have the balls to take charge without being given permission from Diversity Mommy and her Keystone Copz.

Damn burglaries, thankfully this criminal was arrested. I think that https://recfaces.com/ biometric identification software could be very useful for the police investigation. Interesting, how long does it take to identify and arrest a suspected person?

I am glad to see this brilliant post, all the details are very helpful and useful for us, keep up to good work. connect 4 with my team!