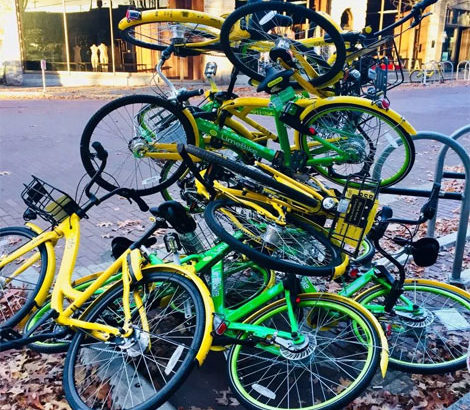 Haphazardly abandoned bike shares are unfortunately commonplace on the sidewalks of Ballard, but the City’s trying to change that.

The Seattle Department of Transportation has released a PSA to help correct bad habits of bike share users.

The department recruited Jacob Struiksma, who is blind, and Dorian Taylor, who uses a wheelchair, to provide their perspectives on the challenges of navigating a sidewalk littered with poorly parked bikes.

“Don’t dump your bikes against the wall of a building because my arms get caught in the handlebars and it makes it difficult for blind and low-vision people to find the entrance to the building,” Jacob says in the video.

Instead, park it in a bike rack, or in the space between the sidewalk and the street, Dorian says.

“Use common sense. Don’t block access to transit stops, curb ramps, benches, driveways, or doors,” he adds. “There should be at least six feet of clear space for pedestrian access.”

SDOT says that bike share companies Lime and Jump will email the video to their users. And, according to The Seattle Times, Jump has established 20 no-parking zones in Seattle, areas in which riders are charged a fee for ending a trip.

Photo: Ballard bike share parking in 2017 (Don’t do this)

This is good info. I hope more riders will follow the rules.

Overall I think people have been pretty good about it. When these programs launched, I expected the worst, but people have surprised me. Still I don’t see why the city has to pay for this video. The rental agencies should make their own and make it required viewing at the time you create an account.

Edog – I am not sure about this but in the event that someone falls over, or is injured in some way, with a bike parked on a pedestrian right of way, like the sidewalk or curb ramp, then the city might be liable in some way. I think this might be why they put out this video.

That’s an interesting legal question. Even if the city isn’t liable for injuries caused by unmanned bikes there could be significant expense in defending claims.

The negligence question is a really interesting concept here with many layers.

I think you are right, the companies that own the bikes should be responsible to educate people on the proper way to leave them. The city’s education campaign should a be tier two platform.

Ah good, I’m sure the meth hobos will change their habits when running amok.

And it’s pretty damned funny that the Capital of Preachy Liberals is so inconsiderate that the special needs people are being put at an even further disadvantage because the trust fund babies and corporate tech drones can’t be bothered to think about other people.

Haha imagine what happens to lower income people when these same idiots vote for these insane regressive taxes that DRIVE UP prices and cut away discretionary income. COMEDY.

Somebody woke up on the wrong side of the bed this morning!

Do you need a hug, Bucky?

No, I need you and your kind to stop making working people pay for illegals and junkies, while sprinkling the city with stupid “green” schemes to mask it all.

You poor little victim, how’s mindless trolling working for you? Maybe it’s time to actually do something about it?

24/7 posting delusional comments on neighborhood blogs isn’t a job Harley. We’ve been over that!

Says the people who make Twitter censor everyone you disagree with.
The MAYOR tweets more than I comment, Genius.

I am currently working for a blind woman. She refuses to become a victim and is self sufficient, living on her own. Now, I am 1 of her “set of eyes” and help her maintain her home. She even vacations in the winter in Arizona. Amazing!

I’m really glad they are rolling out an education campaign. I try to be courteous to others but it never occurred to me that parking a bike against a wall was hazardous to the sight impaired, I thought that would be an out of the way spot.

I hope this campaign goes beyond just a video to posters, billboards, radio, etc. to get the word out. Most people DO want to do the right thing.

Oh that’s rich, nothing like a good old PSA to curb the bike dumping. I’m sure the morons just needed this tidbit of info to correct their bad habits. Thank goodness the local government is spending money to educate idiots.

If the “the local government is spending money to educate idiots”, they clearly need to spend a lot more on somone like you.

You can lead an idiot to knowledge but you can’t make him drink.

Hey Freja, tell me why we need more low skill foreign workers when everything will be automated in a few years and there is an affordable housing shortage.

This picture should bring out the pleasantries in our regular commentators.

Hopefully this helps, but I expect the need for ENFORCEMENT (parking tickets) will remain obvious.
Even Portland uses Parking Enforcement Officers for bicycles. Why not here?

Okay, with this logic the City should release some PSA’s on where to dispose of needles properly, as well! Do people really think that the irresponsible people who discard items (such as these bikes) will be enlightened by this?

Yes, bikes are a problem in central Ballard and around the breweries.

Be considerate of your neighbors that use the sidewalks. Just pull all the way into your driveway, or park on the street. It’s not hard, it’s far more considerate, and you’re not breaking the law.

And don’t even get me started on trees, bushes, etc…

Also, for those that say the government is paying for this wonder why it’s not the responsibility of the companies, remember that the companies each pay a yearly fee to the City for an operating license. While I don’t know this for certain, I would guess that the funds for this sort of PSA probably come out of that pool of money and not from your taxes.

Right! Thank you for that reminder. I’d forgotten about that part of the contract.

Too many damn bikes getting in my way. These no helmet wearing idiots blow through 4 way stops and go balls to the wall thru the entrances to the Fred Meyer parking lot. If you’re gonna ride with the big boys, you better follow the rules. Ultimately I’ll be fine in my Range Rover, but you’ll get chewed up.

wow, so not only do these companies get to leave their inventory all over city streets, the city pays for a cute lil video to teach people how to treat the bikes properly? lol

Again. The companies pay the city.

I know a few cyclists that have gotten citations for traffic code violations.

There are also illegally parked cars on my street all the time that don’t get citations.

Illegal car parking is punished frequently if not totally.

Maybe where you live, but not in Ballard, especially not outside the Ballard core.

Again, what’s your point other than showing your clear anti-bicycle bias?

No bias. Just a cry for equal treatment.
Cars get parking tickets, bikes get a PSA.
Where is the justice in that?

A bicycle-sharing system, public bicycle system, or bike-share scheme, is a service in which bicycles are made available for shared use to individuals on a short term basis for a price or free. … The user returns the bike by placing it in the dock, which locks it in place.

“placing it in the dock” — not since PRONTO, which collapsed after receiving more than a $Million in bale outs. Then its former director left SDOT and hasn’t been seen since.

This place is a complete waste of time and energy. I post a comment / opinion and am personally insulted and attacked. No debate, no conversation, just attacks and insults.

Just in case you forgot, here is your comment:

Oh that’s rich, nothing like a good old PSA to curb the bike dumping. I’m sure the morons just needed this tidbit of info to correct their bad habits. Thank goodness the local government is spending money to educate idiots.

If you post an stupid comment and don’t expect to get criticized for it, I’d recommend staying off the internet. Go out and see the world.

When your comment is about idiots and morons it doesn’t invite discussion or debate. There is discussion happening here, you chose not to be part of it.
You get what you give.

Hope is such a good policy. It works so well with foreign policy too. Umm, there a speed limit signs on the freeway too. I’m now hoping the city soon puts signs all over the city with syringes in circles with lines over them, to end the heroin problem. It’s funny what locals call normal and put up with. All in the name of being “good solid citizens”. I call these things everywhere LITTER.

I used to use this bike program until Lime increased their prices and Uber started surge pricing. Just yesterday I grabbed an Uber bike at Seacrest Park in Alki. In large black print on the bike it says “Free to Unlock & .15 per minute” When you go to sign in for a bike and read the fine print the price is .25 per minute. I’m not sure how they are allowed to clearly advertise one price but charge folks another but then again it’s Uber. We should have expected it.