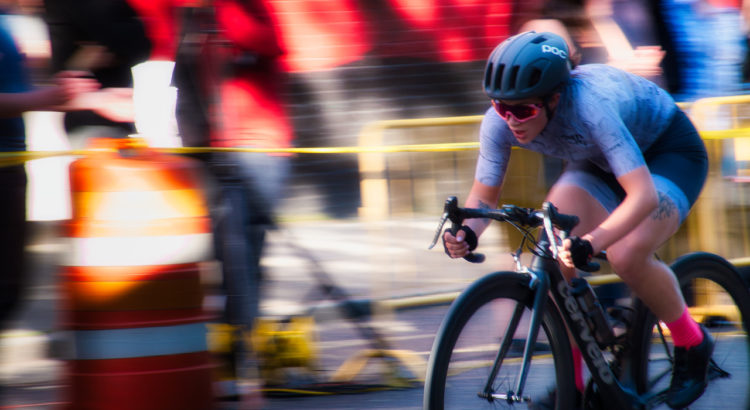 Hundreds of spectators lined the streets of Old Ballard on Saturday to watch the 26th Annual Ballard Criterium.

A total of 317 riders took part in the race, managed by Apex Racing and sponsored by Carter Volkswagen, with fields for younger riders as well as competitive fields for male and female pro cyclists. The half-mile course formed a rectangle through the heart of downtown Ballard, starting and finishing on Ballard Ave.

Nigel Kinney from Canada riding for Team Langlois-Brown won the men’s pro race with the winning time of 1:10:04 and an average speed of 32.1 mph over a 37.5-mile course. (See all the results here.)

Franz and Kinney each took home cash prizes of $1,200 — noteworthy in a sport where male and female riders are often compensated differently. The equal treatment is intentional, says Mathew Anderson, one of the organizers of the race who is on the board of Apex Racing.

“Cycling is challenging … there are a lot of guys and women aren’t as represented as we would like them to be. Our goal is to diversity the race and attract more female riders.”

First-time racer Julia Reade, 38, of Seattle answered the call for female cyclists to participate.  An avid runner, Reade watched the race last year and decided to get involved this year. She’s been networking to “create space for women to feel it’s something they can access.”

Reade’s first effort started badly when she failed to fully clip her feet into the bike pedals, costing her precious seconds at the beginning of the race. Though she didn’t win, Reade says, “I had a blast. I just keep a smile on my face — there will be another race.”

The Ballard Criterium is the longest-running cycling race in the Pacific Northwest, according to David McKinnie, president of Apex Racing.

“We made a decision a few years ago to focus on old Seattle, and the contributions of Ballard to the area,” McKinnie says. “This race in Ballard is important to the race community, and we believe it positions us as part of the community.”

So much fun to watch!

It was a gorgeous day for it too.