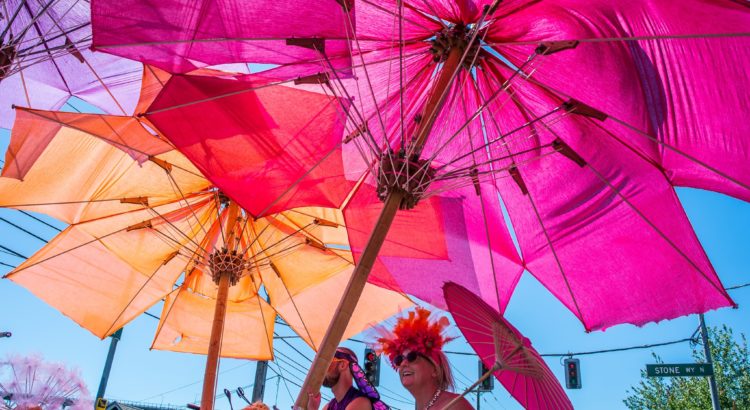 The decision to move the nude cyclists to the end of the Fremont Solstice Parade caused quite a bit of controversy when it was announced in March, and now, the organizers have decided to bring it back to the beginning of the parade.

“Last year, the Parade organizers noticed substantial congestion and delay when the cyclists looped due to the number of cyclists on the route. We’ve noticed an increase in cyclists and some congestion in previous years but last year’s delayed the start of the Parade causing a late finish. We decided to try having the cyclists go after the Parade this year so they could loop as much as they wanted without delaying the Parade.”

However, the Solstice Cyclist Volunteers voiced concerns about the change, so they’ve come up with a new plan.

This year’s “stray” cyclist line-up will be from 11:30am to 12:30pm at N. Bowdoin and Leary Ave. (FYI — The strays are considered those who aren’t with the Solstice Cyclist Paint Party at CSR Marine.)

At 12:30pm, the parade route is closed and cleared by Seattle Police. If you’re a cyclists wanting to enter at the beginning of the parade, you’ll have to take an alternate route up either 39th St or the Burke Gilman Trail to get to the start at Bowdoin and Leary.

At 1pm sharp, the Solstice Cyclists will enter the parade at Leary Ave and continue straight through the route to Gas Works Park. There will be no looping this year in order to cut back on congestion.

The Fremont Solstice Parade will then start immediately after Solstice Cyclists pass the start.

The parade will be on Saturday, June 22nd — more info can be found here.

This busted up parade is such a waste of time. And the naked cyclists are gross. They all look like they’ve never stepped foot into a gym. I don’t want to see old fat people on bikes.

Which local events do you recommend?

I have been watching you for a long time and today I left a comment, I want to say that I admire you so always do such wonderful things. http://run-3.online

Clearly she is posting under aliases to give herself fake praise. Sheesh, what a fragile personality she has.

Dude, it really is awful. Say what you want of Walmart People but Seattle is just as bad.
Not sure when it became ok for women to carry and extra 100lbs and pretend it’s healthy AND attractive.

These same people preach to everyone about “over-consumption of resources” while stuffing their faces with $10 cupcakes and cooking up things like the Soda Pop Tax.

He typed, occasionally using a free hand to dust the pork rind crumbs off his notably worn out Iron Maiden shirt. He noticed a new neighborhood blog article had popped up, but the clock on the TV tray indicated that it would have to wait. Tonight he had double shifts between two crosstown 7-Elevens and Mother would drive him, but only if he was not late to lunch…

Nope, gym every day at 6am, Turth. What you bench these days?

But not wasted time leaving dumb comments when you could just as easily ignore the parade and this article.

How long until this city bans slim, attractive women because they throw everyone into a rage-fueled misandrist fit?

The Council better get their s..t together for next year. Worst parade since the beginning. They were so worried about congestion and the cyclists not looping, that we had to wait 40 minutes for the rest of the parade to start. Terrible. Shame on Fremont Next year I no go. And the thing is, the Council doesn’t care if people go or not. So when they go to pass the green hat…no people, no money. But the parade can not get any worse than this one. GOD!!!

ohh gosh why its happen i usualy give my time to it for enjoyment is it playing in a anime way or not or is is kissanime safe? to use for this purpose help me out as soon.

but recently i joined annual Fremont Solstice Parade is Saturday, and you know what that means: It’s time to get naked, paint your body and crash the parade on your bike.

For about a quarter century, people have been biking ahead of the Fremont Solstice Parade in various states of nudity and body art. i was watched their video at kissanime video downloader that’s amazing and the number of participants has ballooned, and the ride has become an iconic cultural phenomenon in our city.