Changes to this year’s Fremont Solstice Parade: nude cyclists to ride after parade ends – My Ballard Skip to main content 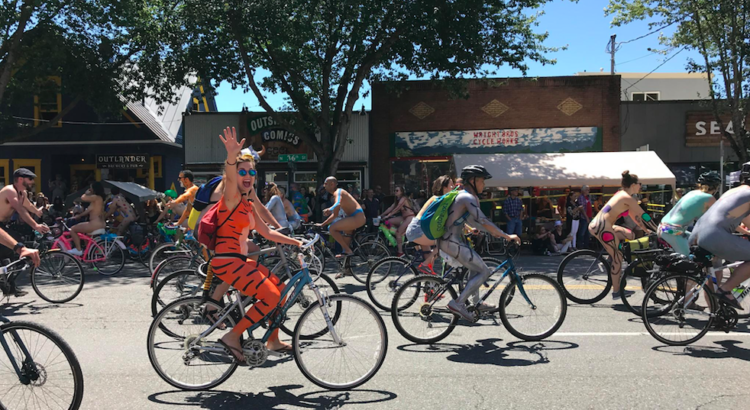 Update: Fremont Arts Council responded to our request for more information about the decision to change the parade this year — this is what they had to say:

We listened and heard the feedback after the Parade last year from Parade participants, Ensembles and spectators and after much discussion, made the decision to have the Parade go first and let the cyclists follow us for 2019. We feel this will give the cyclists more room along the route with less impact on the Parade. We are hoping this change will benefit both groups as well as the spectators’ experience.

Original: Planning is underway for the annual Fremont Solstice Parade, and the organizers have announced a change for this year’s parade — the nude cyclists will be riding after the parade ends.

The main parade will take place on Saturday, June 22 at 1pm, starting at Leary Way NW and 2nd Ave NW and ending at Gas Works Park, where the Fremont Solstice Celebration with interactive art and live music will carry on through the evening. The painted and nude cyclists will be riding the same route after the parade, starting at 2:30pm.

“For over 30 years the soul of the Parade has dwelled in its participants, the artists and volunteers, and what each brings to the streets,” the organizers write. “Who are these people? They are your friends and neighbors and should be you! Celebrate yourself and your community through your own personal expression of celebration art. Step off the curb and be in the parade! Participation is open to the public. Everyone is an artist!”

To register to be in the parade, click here. There are also opportunities to help run the parade, or help build the floats and parade art, plus giant puppets and costumes.

oops, i think you didn’t realize you were posting your own digital scale’s output to the blog. maybe you need to have a proofreader before you hit “Post Comment”

Maybe we should tax the comments, yes?

i’m sure you have enough rolling in from your private prison and sweatshop labor investments to pay for that don’t you? or was it gun manufacturers? i haven’t figured out yet how you benefit from your misogyny and racism, those might just be your “family values.”

i know you have a hard time admitting your racism, but you truly do let your ugly racist flag fly. that said, i’m taking the above as you admitting your own misogyny. why are you calling me soyboy? i call you out for your actual bigotry, and nowhere in my comments have i said i’m a boy or consume soy. please take your bigotry elsewhere. you’re the single biggest poison in our community and it’s disgusting.