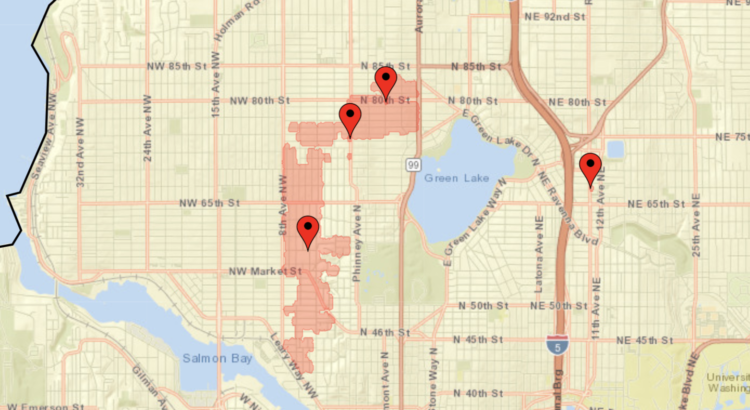 9 p.m.: Power has been restored, according to City Light.

7:40 p.m.: LOTS of power outage reports over in the My Ballard Facebook Group, where Kelani posted this photo of the fire response:

7:30 p.m.: City Light just tweeted that the “early estimate” for restoration time for power is 2 a.m.

7:25 p.m.: Seattle Fire says the driver was able to get out of the vehicle on his own and was not injured.

7:15 p.m.: Seattle Fire says a vehicle hit a power pole in the 5500 block of 4th Ave. NW – right next to Market St. at the base of the hill into Fremont – knocking wires down into the roadway.

We’ve received reports from surrounding area that power has been knocked out. Updating…

East Ballard as a general area, not a named neighborhood.

If East Ballard is a simple direction, then east needs to be lower case. Use capitals for proper nouns. In other words, capitalize the names of people, specific places, and things. For example: We don’t capitalize the word “bridge” unless it starts a sentence, but we must capitalize Ballard Bridge because it is the name of a specific bridge.

Wow. Grammar cops are getting serious here. How tight are your panties? Yet another sign of balkanization. I’m a Norwegian-American then. This crash happened in Seattle, PERIOD.

Meanwhile, we happened to drive by this around 10pm, and it was INTENSE still at that location. Wow!

For the Woke Rainbow Twitter Cult “hate” equals anything funny, accurate, or otherwise provocative that upsets them or runs counter to corporate propaganda.

I know you have a point, I just don’t understand it. Please explain.

It was near my house. Knocked my power out for 45 minutes.

Wow, right about that time I noticed the light in my kitchen flicker twice in about 15 min and wondered what that was.
Thanks GS for posting this.

Time for a tax and rate increase!