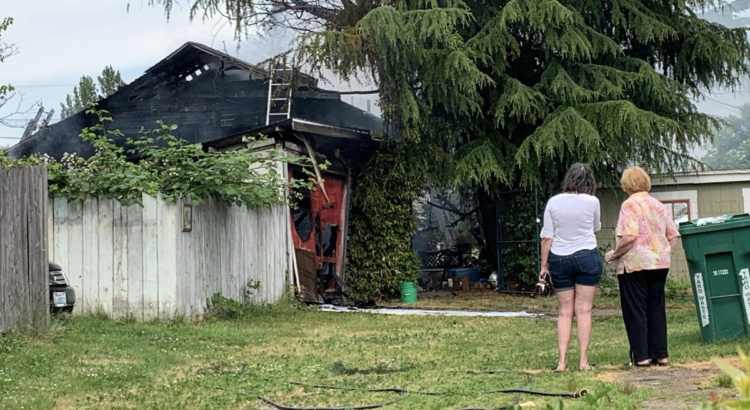 4:40 p.m. Seattle Fire says the blaze is officially out. There are no reports of any injuries.

4:15 p.m. Here are some photos courtesy of Tom Brew (above and below):

4:05 p.m. KOMO’s chopper is also flying overhead. The latest images show the fire mostly extinguished and contained to the single house and garage.

4 p.m. Over in the My Ballard Facebook group, neighbors as far away as Ballard High report smelling the smoke from the fire.

3:43 p.m. KIRO’s helicopter is overhead. It looks like significant damage to the home, but firefighters are gaining the upper hand:

#BREAKING @SeattleFire crews working to extinguish a house fire in the 3600 blk of 33rd Ave NW in #Ballard. pic.twitter.com/j1PTkib3U0

3:40 p.m. Seattle Fire says it’s working to extinguish a blaze in a single-family home in the 6700 block of 33rd Ave. NW in Sunset Hill. According to the scanner, firefighters are contending with a fully-involved garage fire. (Thanks Silver!)

Michaela I wish U the best and hope your insurance covers some of this.

Grateful there were no injuries. Thank you first responders!!

Sorry for the homeowners loss. If anyone knows more about what kind of battery caused the fire, please post. You’d think that would be the newsworthy part of this (to everyone except the H.O.)