Missing Link gets the green light for Shilshole corridor, work to begin later this year – My Ballard Skip to main content 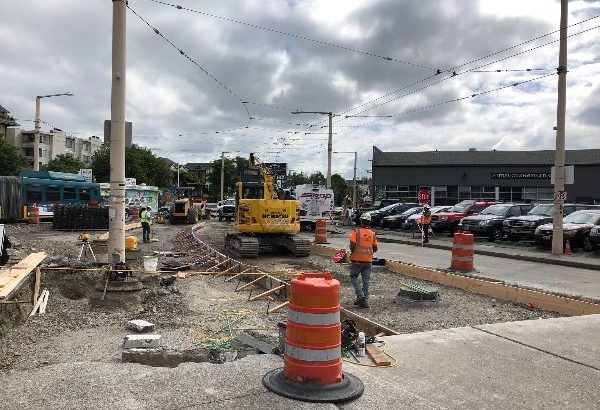 The Ballard Multimodal Corridor project to connect the missing section of the Burke-Gilman Trail has been given the go-ahead to align the trail along Shilshole Ave.

Construction has been in full-swing for quite some time on NW Market St near the Locks — much to the consternation of anyone who ventures near west Ballard — and the project coordinators are preparing for the next section of construction.

The major issue that’s thwarted development for almost two decades has always been the Shilshole section of the trail. Industry workers in the area argued that the hazards of developing a bike trail along a major truck route would be disastrous. And, back in December, that was the main issue that caused the King County Superior Court to find inadequacy in the Final Environmental Impact Statement.

The Court said the FEIS was adequate in all areas, “except for one portion of the analysis of economic factors, specifically the possible economic impacts associated with the potential risk of conflicts between people walking, biking, and driving,” Ethan Bergerson from SDOT tells My Ballard.

Bergerson said the City addressed the issue by completing an additional economic analysis in April, which “did not find any new significant adverse economic impacts associated with these risks.”

So, with the green light, SDOT has planned the Missing Link project into three phases: the Market Phase, Shilshole Phase, and 45th Phase. This is in order to allow for railroad relocation work, Bergerson said.

“We chose to consolidate the railroad work into one phase (the NW 45th St phase), so that we can complete work that does not involve the railroad relocation while we continue to coordinate with Ballard Terminal Railroad.”

With the Market Phase already underway, the Shilshole Phase is expected to begin later this year, with the 45th Phase coming in 2020.

In the immediate future, Market St will continue to be a mess until they’re able to pave the new sections of road. Parking will not be permitted on the north or south side of Market between 30th and Ballard Ave NW until this fall.

Paving on the north side of Market will begin on Tuesday, July 9th, starting at the intersection of NW 54th and NW Market St and will move east towards 24th Ave NW. Once the north curb is paved, crews will begin demolishing and repaving the center lane, which they say should be during the week of July 15. They’ll place gravel in driveways to maintain accessibility.

To read about the project in full, visit the Ballard Multimodal Corridor website.

19 thoughts to “Missing Link gets the green light for Shilshole corridor, work to begin later this year”