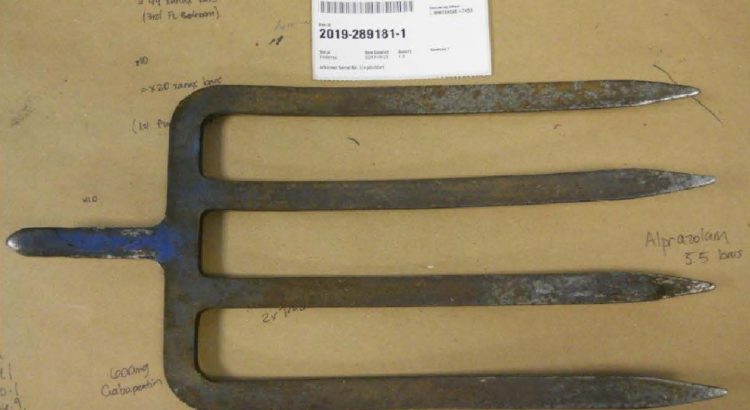 A man is in custody for assault after attacking two people at the Ballard Post Office with a pitchfork.

According to King County Prosecutors, on August 5th, Kuchta tried to stab a woman who had just exited the post office and was getting into her vehicle. A witness rushed to help, and was also attacked.

Kuchta, who prosecutors believe was high on methamphetamines at the time, then fled the scene but was chased, tackled, and held down by nearby construction workers until police arrived.

A truly horrifying story. Very thankful for the unnamed witness who risked injury to help the woman! That’s heroic right there.

Gee its funny the police arrest these druggy thuggies and the courts just put them back on the streets again after a short while !

So what you’re saying is he’ll back in Ballard on August 22nd. Got it.

This is just more Sinclair nonsense.

This has nothing to do with Sinclair.

False they are the ones pushing this story.

As they should. You idiots keep saying it’s the media misrepresenting the homeless which also means you are completely forgiving of them, like in this case, attacking families and the park concierge.
No stupid, that is wrong and so is your point of view. Stop blaming the media for what you and your social justice warriors have created – an unsafe neighborhood.
I suppose all media us bad except the ones that you agree with right? Crap for brains.

Stop blaming the media for what you and your social justice warriors have created – an unsafe neighborhood.

Please explain further how these “social justice warriors” had anything to do with this pitchfork guy or anything else that happens in this city.

Easy.
– Adding layers and layers of oversight on SPD (like OPA) so they can’t do their job.
– Pete Holmes is a total SJW who let’s criminals back on the street by imposing really low sentencing.
– And illegally taxing employers.
– And pro Safe injection sites instead of mental health.
– For sleeping on the streets when every expert from the Obama administration says you should the opposite otherwise it will get out of control (see: Seattle 2015-present).
– Not prosecuting less than 2 grams of heroin so the drug addicts can live on our streets and use property crime as a way to pay for their heroin addiction.
– Homeless rights before public safety.
And on and on.
Businesses in SODO can’t get any relief from RVs that routinely steal and intimidate employees. No remedy because idiots like you prevent it. This is unique to Seattle and why we’re failing faster than any other city. So thanks SJW boneheads. You’ve managed to create a fantastic place for heroin addicts to roam anywhere and situations like this are rising.
That is how it it relates to this, you caused it.

All this and no guns. So, do we now need more laws? Perhaps a 5-day waiting period on pitch forks will satisfy a few. Do we need more laws against doing drugs? More laws period? Perhaps real leadership and ZERO gender politics would be a good start. No more virtue signaling. Or, do we all have to sink further into the drain? Perhaps if our prosecutors were not weenies and not suing POTUS, we could end this crap. I hope this woman sues BIG TIME. This is somebodies mom. She didn’t deserve this. None of us do mayor Durkan. SHe bragged about “Seattle needing a woman to solve it’s tough issues”. Demagoguery on display. Fool me once, shame on me………………………..

A few important points here… this is clearly a police evidence photo. It looks like there are some notes on this as well:

“Alprazolam 55 bags” (Xanex), a benzodiazapine, a frequent drug of abuse. The note on the top looks to read “20 Xanex bags.”

Why are we so tolerant of druggies who are destroying our neighborhood. They’re criminals and belong in jail.

Also, the sad fact is, a citizen using lethal force on this criminal under the state’s self defense laws would be in a safer position legally than a Seattle Police Officer.

Why are we so tolerant of druggies who are destroying our neighborhood. They’re criminals and belong in jail.

You realize that we’ve been throwing drug addicts in jail since Nixon declared the “war on drugs” on June 18, 1971, right? To the point where 1% of the US population is in prison.

We could do what other first world countries do: cure the addicts and turn them back into functioning members of society. But for some reason, we as a country like to spend a huge chunk of taxpayer money on the world’s largest prison system (close to $200 billion per year) and continue to vote in people to ensure that doesn’t change.

I’m sure this perpetrator is just a misunderstood, homegrown, down-on-his-luck neighbor of yours! Why, I’m certain the implications that he was high on drugs while being violent are lies designed to make you forget your progressive ideology – that all these junkie-fueled violent losers are the real victims! Never forget, living indoors is a crime against society!

No idea why you are all being NIMBY about this guy. He’s truly homeless and needs our compassion. Let’s make sure the laws are in his favor. Also, let’s make sure he can camp anywhere, even next to schools, and be extra super politically correct in not referring to him as “drug addict” or “mentally deranged”. He deserves our respect and caring as a neighbor because he won’t hurt anyone.

Totally kidding! The city should’ve cleaned this up years ago but the rhetoric above prevented any real progress so now we have to live with drug addicts that do this all the time. Just ask the park concierge at Ballard Commons on day 1.

You get what you vote for Ballard so wise up. Look at how much damage Mike O’Brien did in a relatively short amount of time.

Hire him at Trident Seafoods!

So this guy tried to attack my husband and I around 4:30 AM as we were exiting the ballard Swedish ER a few months ago. I had literally just given birth 36 hours prior and I thought I was hallucinating I was so exhausted. No joke, tried to attack us with this pitchfork so we had to stay in the ER while the police came. So stay safe out there!

Mike O’Brien would call you a NIMBY for saying anything bad about the homeless. Many his voters too. You’ve highlighted what many of us have known for a while that this neighborhood is no longer safe. All a product of super progressive policies that maligned the police and enabled drug addicts to live anywhere. Keep sharing your voice. We’re getting the enablers out.
Thank you and sorry to hear your story that has become commonplace in Ballard.

I spoke to Pete Holmes’ office recently about why repeat offenders are released so easily.

It seems that offenders like this are often labeled mentally ill. Once they are, the court is very restricted. They cannot be held for long. Holmes’ office has not pushed back on this.

I believe they are making a statement. It’s correct – there are not enough mental treatment facilities. But in the meantime, they are throwing Seattle citizens under the bus, and endangering public safety.

I’m surprised none of the victims of these crimes have filed suit against the city. Most personal injury lawyers would be willing to do that.

Well, the “pitchfork wielding mobs” has taken on a new meaning.

you know, letting drug addled nutters camp and roam freely around the city is not a good idea.

why the city seems to care more about these people than normal, tax paying, law abiding citizens is dumbfounding.

The information you shared is very useful for each of us. cannon basketball 3