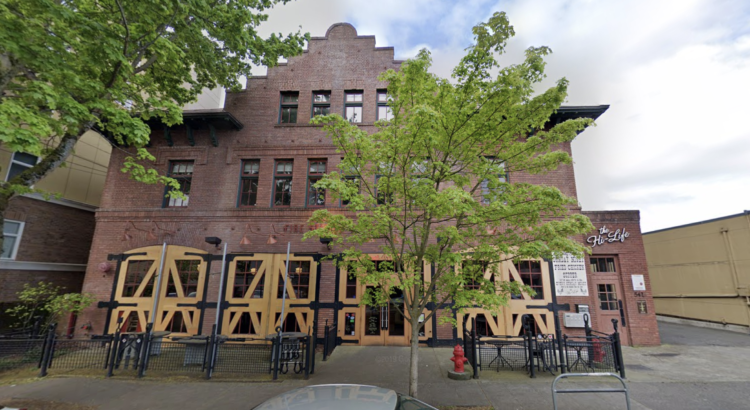 Update: According to Peter Levy from Chow Foods, the new restaurant will be named Valentinetti’s.

“I’ve had a love of Italian cuisine forever, and given the chance to honor my wife Betty’s godmother, Aurora Valentinetti, with a new restaurant offering traditional Italian cuisine—it brings it all home for us,” Levy said in a statement.

The new restaurant will serve classic Italian fare — pizzas and pastas, with gluten-free and vegan options — and will also feature puppetry shows.

Aurora Valentinetti, now 99, was a University of Washington professor who taught puppetry courses, and even has a puppet museum named for her in Bremerton which carries on the legacy of her career.

“The forthcoming Italian restaurant will showcase the unfussy, home-cooked Italian food for which she is also beloved.”

Original: After 15 years, The Hi-Life restaurant has announced they’ll be closing, with plans to reopen as an Italian restaurant.

Hi-Life manager Ben Dille tells My Ballard that the owners, Chow Foods, have decided to go in a different direction, to “keep up with the changing pace of Ballard,” he says.

Dille says their last day of business will likely be September 8th, but says that could change depending on staffing. They expect to be closed at least five weeks — Dille wasn’t sure they’ll be able to retain their staff during the closure and substantial remodel.

The Italian restaurant is expected to open in October — we’ll keep you updated.

This makes me sad. I love the Hi Life.

This is really sad as it’s been one of our fave spots for years. :(

So, Ballard is becoming more Italian and less Norwegian? Do we need to rebrand the Nordic Heritage Museum?

I hope the Italians like fried chicken. No messing with our Sunday traditions!

Everyone? Not VEGANS!
I like to see chickens running around ALIVE!

This is sad news. It’s a great restaurant that will probably be replaced by another unaunthentic meh italian..

From the article, it sounds like it’s still owned by the same restaurant group, so, it will be that group’s take on Italian food.

These people are merely catering to the new sophisticated pallets that is the new Ballard. They too have experts that see trends and perhaps want to be ahead of the curve.

Wait, we have sophisticated wooden cargo platforms in Ballard???

Were the other 4 Italian restaurants within a few blocks not enough? Seems a strange decision to me.

Right??? They can’t beat San Fermo so why even try?

Really disappointed as well. I love the breakfast/brunch menu. And as others have said, there are several other Italian places nearby. And puppet shows…??!!

Thanks for recognizing the genius of Italian puppeteer, Aurora Valentinetti, honored recently with UW’s Distinguished Teaching Legacy Award. If your Italian food is half as good as hers Valentinetti’s will be a winner.

I’m pretty unhappy with Chow Foods. We had a rez last night for a bunch for my son’s birthday. Our waitperson couldn’t have been better in an UNBELIEVABLY crowded hot restaurant. When I asked if she was moving on into the new restaurant, she said that *none* of them had been invited to join. We weren’t late, the menu is already limited as they wind down – but tonight is their last dinner service so even at 6:30, the menu was half out of its listed items. We had a great time because of our waitperson, and went with what was available, which changed as we sat there. By 7, there was no chicken or ahi. If you choose to go, make sure you TIP BIG for the waitstaff, who bear the burden of frustrated customers with the quick shutdown and clear getting rid of food in the pantry, and disappearing menu items. Or just walk in and give somebody a tip and DON’T EAT THERE. I admit to not knowing the reasons for not inviting any of the staff to continue – but we felt for that staff last night. By the way, the food we were able to… Read more »