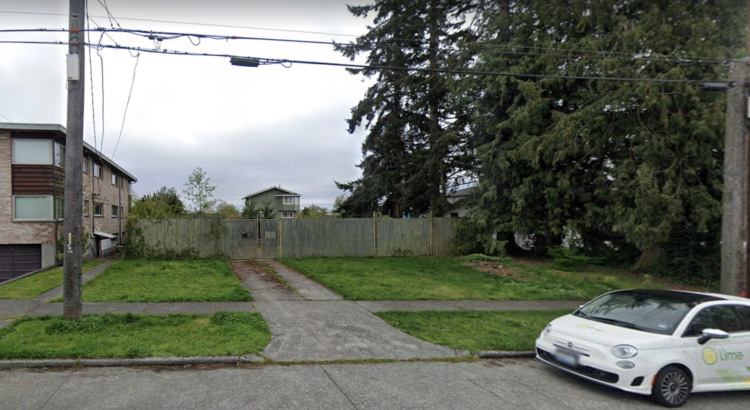 A City-owned parcel in Loyal Heights (7750 28th Avenue NW) is set to be donated to create eight new family-sized townhomes for low-income households.

The donation is part of Mayor Jenny Durkan’s Housing Seattle Now initiative, which also includes the donation of a parcel in Phinney Ridge. Habitat for Humanity of Seattle and King County will receive at least $720,000 from the City to develop the Loyal Heights land, and Homestead Community Land Trust will receive $1.51 million to create 19 condos on the Phinney Ridge parcel at 6109 Phinney Avenue N.

The parcels are both Seattle City Light surplus land, and are being donated to the nonprofit developers at no cost. The donation is the first of its kind in Washington since the state legislature in 2018 created the authority for cities to transfer surplus utility-owned property at no cost when the intended use is to create affordable housing.

“The cost of buying a home is out of reach for many families in Seattle, which is why we must continue using all the innovative tools at the City’s disposal to ensure families can afford to continue to live and work in our City,” Mayor Durkan said in a statement.

The two developments will provide housing for 27 families total, and the Loyal Heights townhomes are meant to accommodate larger families.

According to a Seattle Times report, the new homes will be sold to families at or below 80 percent of the area median income, or $70,600 for a two-person household. The cost of each home will be roughly $250,000, and will remain that price if resold.

The City has also transferred a piece of public land in Judkins Park, which will create 16 townhomes, with 10 affordable units.

So nice of them to spend our hard earned $$ like junkies do on heroin. Just who IS “the city” anyway? Compassion to a liberal always means spending others money. The very same people making it tougher and more expensive to live here are now going to solve the issue? LOL.

Seek help. You truly need it.

Who is “the city”? It’s you, and me, and all the rest of us who live here. It’s run by the people whom we elected, and they use the money that they collected from all of us. There will never be anything that we all agree on, so decisions, like elections, are by majority rule. That means there will always be some things that some of us don’t agree about. But that’s the price of letting everybody have a voice. It’s called “democracy.”

This is great news and needs to be done in every neighborhood, more than once. My only concern is that the people who buy one of these will not be able to enjoy the property appreciation that the rest of us do in our own homes…but I reckon having a home at all will be worth that trade-off.