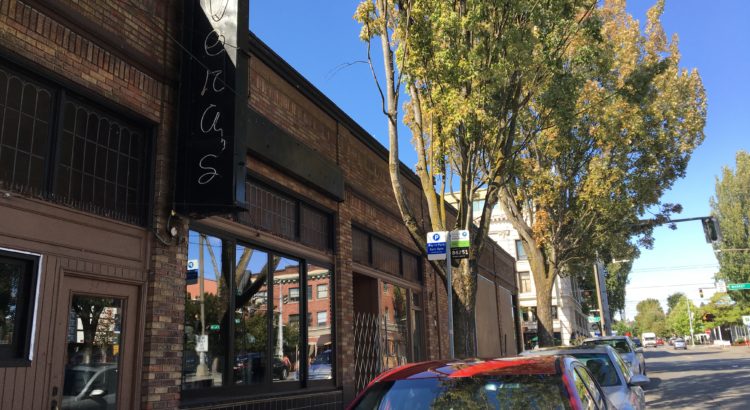 The beloved Vera’s diner has undergone a total transformation, and is now open as a pizza restaurant.

The diner on 22nd Ave NW closed suddenly in December after five decades in Ballard. Owner Vasilios Polimenakos’ family bought the restaurant in 1985, but decided it was time for a reinvention to keep up with the changing pace of Ballard.

“Breakfast seven days a week is nice but that trend went away awhile ago,” he says. “The demographic has changed. We did great with breakfast, but needed a makeover and to cater to night business.”

Vera’s is now all about the night business — they’re 21+ only.

The new restaurant will serve pizza by-the-slice — “big slices,” Polimenakos says. “There aren’t many options in Ballard for food past 10 or 11pm,” he points out, which is why they’ll cater to the late-night bar crowd and serve slices until 1am.

Their full pizzas will come in just one size — around 18″ — and will include some specialty pies such as a bacon cheeseburger pizza, and a chipotle taco pizza. They’ll have at least a few pizzas on deck available by the slice, and will have a limited menu for now.

The bar will have six taps featuring all local beer, with Stoup and Fremont on tap now. They’re working on expanding their cocktail menu, but Polimenakos says they’re not trying to be a craft cocktail bar. Rather, think Jello shots and Boilermakers in the future.

The decor has changed considerably: “Ballard needed a little bit of shiny, some sparkles and glitter,” Polimenakos says. Among the changes are zebra tiles on the floor, new shiny booths, a brand new bar, and a big, colorful mural done by local artist Rick Klu.

They also took out the low ceiling (reclaiming an extra eight feet of space), and cleaned up the old stain glass windows, which Polimenakos says makes the space look and feel completely different.

A little bit of the old Vera’s remains: they took the photos off the wall and placed them into the bartop in honor of the restaurant’s long history in Ballard.

Vera’s quietly opened over the weekend — their hours are 4pm until close, Tuesday through Sunday (closed Mondays for now).

Hmm a Pizza place in Ballard that doesn’t allow for under 21. Without kids from 3 years old to 20 year old UW students I’m not sure how this is logical business model. Maybe it works in Cap. Hill but this isn’t Cap Hill.

Reproduce on your own dime. I’m glad I can enjoy a pizza without a bunch of “precious miracles” harshing my pepperoni buzz.

I love this comment. Catering to spoiled brats is tough. Might not get the likes you want. Perhaps all the wizards of smart here can soon open their very own place and deal with the snobby millennials. They then can deal with conformity, compliance, HR, and crappy customers.

Wizard of Smart weighing in here. I decline to open a restaurant in Ballard, but thanks!

Speaking of Wizards, when is that Wizard bar supposed to open in Old Ballard?

There are plenty of all ages pizza joints in Ballard. There’s also plenty of people in Ballard without kids. Vera’s is testing out a 21+ pizza joint to cater to that crowd. Seems like a smart move to me.

If it doesn’t work, they can switch to all ages with very minimal effort.

I’d be more concerned of whether their pizza will be any good. I’ll definitely be giving them a try.

Maybe they were inspired by Matador, which is 21+ only.

Kind of like that Mexican place – Matador – that doesn’t allow those under 21. Last time I checked, they were doing just fine, and there at least 2 pizza places in Ballard that allow kids.

The information you bring to me is very valuable. hotmail entrar