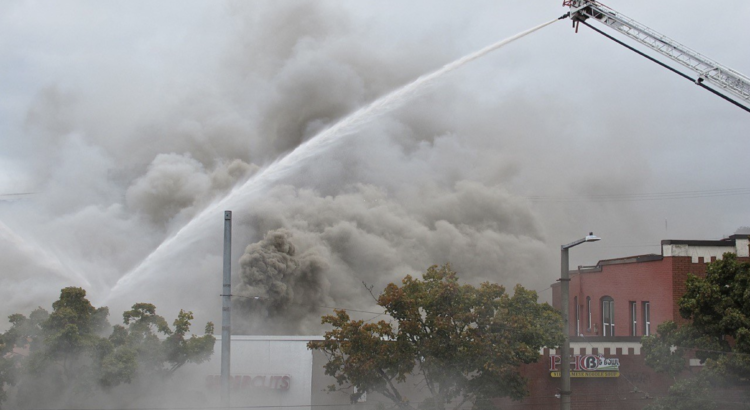 9 am: We’ve posted a story on how you can help the businesses impacted by the fire.

7:15 am: Market St. remains closed between 22th and 24th. There’s no estimate when Seattle Fire will be clear of the area. Investigators will be at the fire scene later this morning.

7:45 pm: Firefighters will remain on scene throughout the night to ensure the fire does not reignite.

In a blog post published tonight, Seattle Fire says the first responding units discovered light smoke originating from the attic space of the building, which forced firefighters to take to the roof to fight the fire. While four businesses were a total loss, the fifth, Pho Big Bowl, sustained water and smoke damage, Seattle Fire said.

Seattle Public Utilities says that some residents may see discolored water from all the hydrant use. “You may want to wait until it clears before drinking it,” explains SPU in a tweet.”It should clear on its own. Try running the cold water for a few minutes to see if it’s clearing. If the water doesn’t clear, let it sit for 1-2 hours. Then run again.”

Also, the Seattle Times reports this evening that a firewall between the jeweler and pho restaurant saved the adjacent businesses from the wind-driven flames.

3:30 pm: Flames have subsided in the building – the fire is officially under control – but Kristin Tinsley from Seattle Fire says firefighters will be watching for hot spots for several hours.

While My Ballard was on scene, crews were working to keep Classic Consignment safe, dousing the buildings from the alleyway and above.

Market Street will continue to be closed between 20th and 24th while crews stay on scene.

Many local businesses have closed due to the smoke, including QFC on 24th. The Ballard Library is also closed.

2:50 pm: Here’s a screenshot from Lauri Miller’s live stream on the My Ballard Facebook group. Lots of smoke blowing to the north…

And a photo shared by Seattle Fire…

2 pm: The fire is still in full force, driven by the wind, creating a massive amount of smoke for residents north of Market St. Seattle Fire has about 65 percent of their entire force working to extinguish the blaze, which has so far engulfed five business.

Ballard buses are being rerouted, with Market St. still closed.

The bulk of the fire looks directly above La Isla. KIRO has live streaming of the blaze here — below is a screenshot taken at 2pm.

1:36 pm: The roof has collapsed, according to Seattle Fire. Market Street is closed and traffic in the area is backing up quickly, so avoid downtown Ballard if you can.

1:22 pm: Seattle Fire says it has shifted to “defensive operations” with ladder trucks providing water from above. Residents are asked to close windows and doors to avoid smoke exposure. KING 5 reports a firefighter was injured while responding, but there’s no word on extent of injuries.

1:05 pm: Firefighters have been pulled off the roof as flames spread, and the response has been elevated to three alarms. Watch live video here.

Market Street is closed as firefighters contend with the blaze. Live video from KIRO 7’s chopper shows firefighters battling the fire from the roof. “Firefighters have cut holes in roof to release toxic gases and smoke,” said Seattle Fire on Twitter with a video that shows flames shooting from the roof along the back alley. Businesses in the building have been evacuated.

While the fire began as light smoke, it has intensified. The large fire response has been upgraded to three alarms with 6 ladder trucks and 13 engines.

The wind is blowing the smoke to the north, and residents as far away as 85th St. report seeing and smelling the smoke.

There are no immediate reports of any injuries.

(Photos from Silver in the My Ballard Group)

I was there when the first truck arrived. A little smoke coming out of what looked like the super cuts.

Condolences to the businesses and their employees and hope they can get back on their feet soon, especially La Isla.

Because they were a delicious, unique restaurant. I’m not Op, but I also hope they get back on their feet.

Because it’s one of my favorites and (arguably) a Ballard gem.

Because it had Ballard’s best rum collection!

Because it had Ballard’s best rum collection!

It’s been burning for 2+ hours now.

One day collecting money for MD the next risking their lives. thanks.
Not taking anything away from the SPD, who risk their lives at every shift. Thanks to all.

Heartbroken for Kitchen N Things – the holidays are so cooking oriented 😭

Same here…I was going to buy a new Dutch oven there to cook my Thanksgiving turkey. So sad. The ladies there are so kind.

Pretty rough for the neighboring businesses caught in the fire. While it’s unfortunate to hear about the fire which I’m sure was not intentional, imagine being the jeweler or other businesses who probably did nothing wrong and yet are caught in a fire completely out of their control. That just has to make your heart sink.

Lots of assumptions here. What if the jeweler was melting gold?

I made sure to leave the word probably in there… Sure it could have even been the hair salon left a curling iron on too. Point was the fire is indiscriminate and the business owners and their employees I’m sure are going home wondering what they are going to do tomorrow.

So it’s okay to speculate wildly just by putting “probably” in the sentence?

Probably! :)
I think it would be less okay if I was blaming them for the fire. Speculating they are innocent until proven guilty seems appropriate to me.

It could have been any business. It was an older building and the possibility of some old electrical wiring not up to code “could” have been the cause, that could also include the jeweler.
I’m sorry for all the businesses. I hope thing can be rebuilt better and all of the businesses can survive somehow.

Probably trolls voting DOWN your comments… =]

So PROBABLY you’re not just Trolling?

Terrible news for all the businesses. Big Bowl was visited by my family quite often, very friendly staff there and delicious food.

Is there some reason that the only business not called out by name is a Black-owned business? Octo Designs. Doesn’t take a sleuth to figure it out. I guess their business can’t even burn down without them being faceless/nameless/invisible.

Well duh, racism! As always. I’m pretty sure the geeky Swedes are racist because they forgot the one business none of us ever heard of.

The name of the business is in several of the photos on this page. And if you walked down Market with any regularity, you would have known it.

CP – yes, it just changed recently due to a new partnership. Check out who the owners are!

I did — and I’ve been in the store. Bet you haven’t. One of the owners of the partnership there is a Black man.

WW – and you just immediately jumped on the band wagon without checking what that CP troll was up to?
This was a tragic situation and there is no need to blame anyone for not reporting everything, but you two including “racial bias” WOW!

CP – I thank you for the absolution and I admit that I am an idiot some times.
And probably a shrill lunatic a few times in my life.

It wouldn’t be an internet comment section without elderly people having n idea what they are talking about and then demanding everyone believe them because they are white.

The names of the destroyed businesses were updated at 3:30 and include Octo Designs.

Crank Pants – you are a bad person! Check what you post BEFORE you post it, unless you intentionally want to stir the pot.
Octo Designs is owned by two partners neither of them are African American. Did the ads for “grills” make a bigoted judgement?

CP – do you know the owner of Octo Designs? Because David Coleman was on TV and he is white!

What if La Isla moved into the Volterra space?

I’m guessing whoever owns that property is going to raze it for a 6 story retail/apartment building which will probably require 3-4 years of planning and construction. It would be awesome to find alt. locations for the businesses that are displaced. La Isla at Volterra would be a great start!

It’s zoned for 75 ft max, mixed use, with pedestrian oriented retail at the bottom and mandatory affordable housing minimums, so that’s a pretty solid guess. The current owner has owned it since at least 1987, so appeared content with it’s (now) previous use.

La Isla had very recently doubled down on their Redmond location and were in the process of transitioning the Ballard location away from a sit down to more of a tapas/night life space. I’m wondering if this is enough for them to just throw in the towel for Ballard. I hope I’m wrong!

La Isla has been through a lot! :( https://komonews.com/news/local/like-a-horror-movie-man-smashes-ballard-restaurant-window-attacks-diners