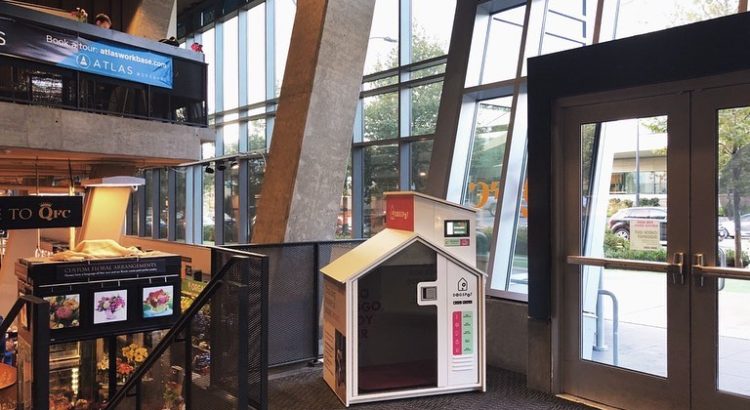 The high-tech dog kennels known as DogSpots have expanded in Seattle, and are now located at both the QFC and New Seasons in Ballard.

The idea behind DogSpot is to create a safe, clean space for pups while their owners are shopping. They’re operated via an app, and are lockable, self-sanitizing, camera-monitored, and temperature-controlled: heated in the winter, and air-conditioned in the summer.

Dog parents even have the ability to check in on their dogs via a “Puppy Cam” feed through the app.

Although they launched in Seattle in May, more kennels have been popping up all over the area — new DogSpots are now at Central Co-op in Capitol Hill and at the Inglewood and Kirkland Urban QFCs.

DogSpot was founded in New York City in 2015, but they say Seattle is home to the company’s largest network of kennels.

Sure, when they learn to sit, use toilets properly, are well socialized and no longer chose to steal, rob and bite to pay for their drugs. You know, be a “nice doggy”.

Yes, but dogs can be house trained unlike the vagrants of Ballard Commons who despite having not one, but two Honey Buckets somehow missed them, and hit the library:

Somehow I imagine they’ll miss the Portland loo too, unlike my dog who waits to go where he’s been trained to go.

Your analogy doesn’t make any sense. House training a dog means teaching them to go to the bathroom outside.

Sure it does, just reversed: house training vagrants means teaching them to go to the bathroom inside the Honey Buckets provided:

Pooping and pissing on the library despite having TWO Honey Buckets 50 feet away. I’ve known toddlers with better aim.

So can you explain why the homeless miss their toilet by 100 feet and p*ss and sh*t in the bushes and on the library while my dog can hold it in until I get back from work?

What part of ‘being oppressed’ causes one to drop your pants and lay some pipe down over a parking garage vent when’s there’s a perfectly good Honey Bucket/Portland loo across the street?

Why can’t the compassion brigade explain this to us?

We gave them a toilet. They sh*t in the bushes.

We gave then a shower and laundry place, they bath and wash in the fountains.

And if one isn’t capable of hitting the toilet accurately or using a shower what are the chances you can ever manage unsupervised indoor living in a Hobospot (™)?

Troll tip for you… people with compassion aren’t insulted by you calling them “compassion brigade”, so better luck next time troll.

Tell it to your therapist, because the rest of us know the difference between compassion and enabling. Lack of compassion and internet trolling are signs of mental illness.

Pretty sure assuming you are the voice of a collective is a sign of mental illness? Is “us” all the voices in your head? Trolling is a timeless art form, but WW is not trolling. Maybe your mental illness is causing you to hallucinate and you’re not seeing what was written correctly.

Awe, the labeling game now begins. And compassion to YOU mean spending everybody else’s hard earned $$. As an alcoholic with 17.5 sober, I can tell you about compassion, bottoming out, sobering up and making excuse after excuse. Will go 1 step further here: “most limitations are self-imposed”. Perhaps it’s time to legislate and regulate bicycle safety and safety classes and earmark this $$ for the mentally disabled people. Painting with your broad brush is NOT the answer though. Please give us your solutions instead……….

Congratulations on your sobriety!

Why not house them both?

This post is discussing in an outstanding way. I like your way yo discussed your valid points and facts about this. I really said you share more and more articles. https://i-nortonsetup.info/

this is all so, so true! i also you outstanding you post is for sharing more!

Perfect distillation of the My Ballard forum here! First, e2 with a nonsensical response, then WW with a swipe at the mentally ill followed up by a post from a bot with a link (don’t click it!) to probable malware. :)

A “swipe at the mentally ill” you state eh. Whatever their issues are they need to go/get help. Merely disagreeing with you brings us another “swipe”. I do agree attempting dialogue here is a tough assignment, dealing with all the created and maintained left coast liberals. A few of us realize exactly what is being allowed to occur, right before our very faces. I guess to you a few more stabbings, constant theft/crime, OD’s daily is just common and OK with you. The businesses LEAVING are the problem, right? You don’t own compassion. You though have been completely conditioned. Tell us, WTF would we have to spend $$ on or talk about here if leaders actually led? Why do we have to become SF North? Go ahead, blame this on right wingers. After all, there are so many here bothering you and living rent free in your brains,

Well, agreed that the mentally ill need help anyway. Maybe stop insulting me on an anonymous board and suggest some solutions? How about some compassion for the mentally and down on their luck? Maybe go down to Ballard Commons and volunteer at St. Luke’s?

Rodrigo Duterte has a great solution for drug using and dealing personalities.

Just so we’re all clear, here is the solution you’re proposing, from Wikipedia.

“Duterte has urged members of the public to kill suspected criminals and drug addicts. Research by media organizations and human rights groups has shown that police routinely execute unarmed drug suspects and then plant guns and drugs as evidence. Estimates of the death toll vary. Officially, 5,104 have been killed as of January 2019. News organizations and human rights groups claim the death toll is over 12,000. The victims included 54 children in the first year.”

¯\_(ツ)_/¯ I think the alt-right may have been editing that page to make the police look bad.

The UV lights are never run on these houses – they have not been run in MONTHS. Forget after each session. They also manually alter the temps so it looks safer than it is. For example, a house can actually be like 85 degrees, but the company manually overrides it to say “68”. If you don’t believe me, call the CEO and ask for comment and proof they don’t do this. I can show proof that they are lying to their customers, investors and putting dogs at risk.

Also many (including myself) realize they are a great place to leave unruly children if you want to enjoy an hour or two of “peace and quiet” time.