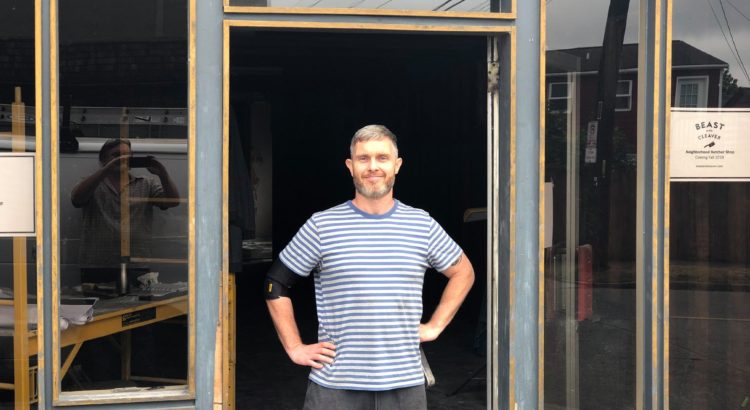 Loyal Heights’ new neighborhood butcher, Beast and Cleaver, is planning to be open before Thanksgiving.

Englishman-turned-Seattleite/owner Kevin Smith has been working for several months to renovate the former hair salon at  2362 NW 80th St, just next to Larsen’s Bakery and the Fresh Fish Co. He sent out an update this week saying they’ve been waiting on ducting, and once it arrives they’ll do the drywall and finish up the transformation.

“It looks like this is going to push us back to mid November, but you never know!” he writes. “Send a prayer to the ducting gods for us. We’re doing our very best to open at least a week before Thanksgiving.”

In addition to being a “whole animal” butchery, Smith will offer butchery and cooking classes for customers, teaching how to make bacon, meat pies, and sausages. Smith has advertised the classes through an IndieGoGo campaign, funds from which are going into the launch of his business.

The butchery will also have a small kitchen, which will serve intimate dinners on Saturdays for just 10 guests. “These dinners will showcase the best meats and produce available on any given week,” Smith says.

The foods featured on his website look fantastic! Hoping he’ll some of those meat pies in-store.

Another brave soul taking on the compliance and conformity regime. As a small biz owner I wish them good luck + huge success!