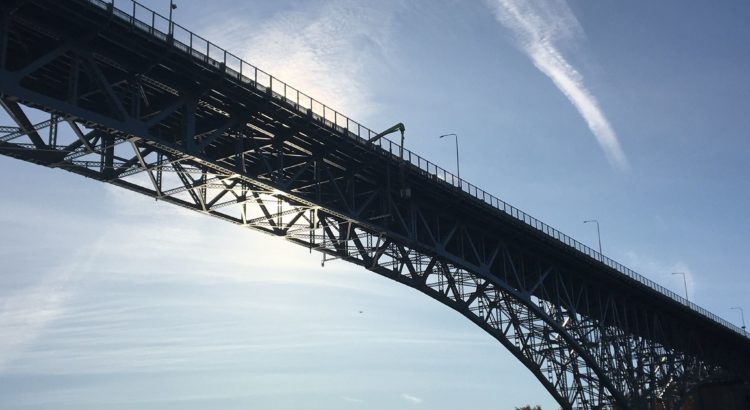 All lanes of the Aurora Bridge are back open, as crews have finished repairing the damaged support beam under the southbound lanes earlier than expected.

The emergency work was started on Oct. 31, after bridge inspectors discovered a corroded support beam (also known as a stringer), which had dropped about half an inch.

Crews worked around the clock for five days to fix the stringer. First, they removed paint from the damaged area, then replaced the connecting plates and repainted the section to prevent corrosion.

“This was a complicated repair because the contractor was working with a stringer that was still holding a section of bridge deck,” Washington State Department of Transportation Assistant Regional Administrator Messay Shiferaw said in a statement about the reopening. “We needed to lift the closed part the deck with additional steel to alleviate pressure from the stringer, repair the connecting steel and bolt it all back into place while still supporting the concrete deck.”

The lanes reopened just in time for this morning’s commute. To learn more about the project, visit WSDOT’s website.

huh, the day after the election you say?

Take off your blinkers man. Their plan: A) to 1st fleece the F out of us. B) if and when that doesn’t work, take away your rattles and sucky do’s. C) make YOU feel guilty. D) tax and spend all over again creating MORE you’s. Who’s money is it in the very 1st place pal? Do you run YOUR household in this same fashion? How much is YOUR credit card debt? Want me to then pay for that too? Quit voting for people that do just this. “Compassion” does NOT mean spending your neighbors hard earned moeny.

None of that sounds like a plan to influence the election by temporarily closing lanes on the Aurora Bridge. But at least you tried to explain your thoughts?

Um, just who HAS been running this entire for like EVER now? Who let things get this bad? Wouldn’t be on purpose, would it? Where now are all the cynics, theoreticians, and complicit folks telling us this is all somebody else’s fault? Been 40 years of “d” in Olympia. Seattle is Berkley North, so own this libtards. OWN YOUR VOTES + own YOUR MESSES.

OK Boomer. This is an almost 90 year old bridge that is well past its lifetime. Regular maintenance and repairs are the bare minimum to keep this bridge standing. Unexpected breakages are to be, well, expected. Bridge maintenance knows no political boundaries despite your insistence.

Besides, shouldn’t you be reveling in the I-976 victory?

Ya know, all the “ok boomer” thing does is make you sound like an immature child. It doesn’t matter what it’s in response to, it comes across as the words of a spoiled brat who’s been told they were right and wonderful and could do no wrong and got participation trophies their whole life.

Look! A tax cut for the wealthy that’s trickling down!!!

*mikedrop starts running in that direction*

Yeah, thought as much.

I’d be wiiling to bet the few dollars I currently have that you are MUCH closer to being wealthy than I am and I’m not so petty as to hold that against you.

And no I’m not a boomer either. I’m too young to fit into that category.

But you can both make ignorant assumptions about a person you don’t know. It just shows your character, or lack thereof.

Nobody said you were wealthy.

Huh, I guess I read the comment from “Truth” differently than you did.

That individual stated that I would be running to benefit from the next tax cut for the wealthy.

It was more of a comment about how Boomers can’t resist a tax cut for the wealthy, naively believing the “benevolent wealthy” will trickle down the tax savings back to the working class.

I heard no arguments for 976 which used “trickle down” words or reasoning. Did any of you?
(I am a Boomer who voted No on 976. I know many others likewise.)

I am a Boomer who voted No on 976. I know many others likewise.

And we thank you all for leaving us with a traffic infested region, where we will spend years of our lives commuting, so you could save a couple bucks!

We get it, you’ll be gone, so it’s not your problem.