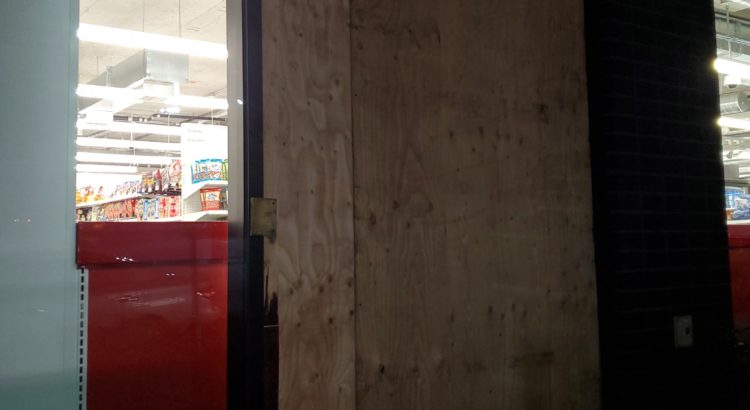 It was a rough night for two Ballard businesses: Classic Consignment was burgled in the early morning hours, and Target had an attempted shoplifting, after which the suspect threw a rock and broke a window.

The Classic Consignment burglary happened at 3:45am. According to Detective Mark Jameson from Seattle Police, the burglar tripped the alarm after entering through the front door of the closed shop on 24th Ave NW near Market St. Police say they stole a backpack, purse, and some clothes.

Classic Consignment owner Paula Lukoff shared the news in the My Ballard Group, saying that while the burglar also stole designer sunglasses, luckily the fine jewelry had already been packed away in preparation for their upcoming move to 14th Ave NW.

Seattle Police say they also responded to a shoplifting incident at Target yesterday evening — there were reports in the My Ballard Group that the person who attempted the theft threw a rock at a window while leaving the store, which has since been boarded up (photo above).

There’s no correlation between the two incidents, and both suspects are still at large, police say.

Survival crimes. Once Dan Strauss joins SCC we will see a change.

Honestly what change are you expecting. Even if we hired ten more cops – which we can’t – these crimes will still happen.
A new city council can’t stop the drug and crime epidemic unless they move us to a military state.

Why can’t we hire 10 more police officers? Aside from the difficulty hiring due to the anti-police messaging from some SCC members, there isn’t a hiring moratorium or budget driver here, is there? And while you may see it otherwise, somewhere between today’s lax view and your “military state” extreme, there has to be a more effective way to lead our city.

It has nothing to do with Police Officers. It has to do with a Liberal City prosecutor who won’t do his job. This is a sanctuary city, brought to you by Liberal Politicians. Those people, Mayor,council,prosecutor all Liberals. They have CHOSEN to not enforce certain laws. Or prosecute certain crimes. Your vote elected them.

Obviously you’ve lost touch with reality, and have spent too much time watching Fox News. Which laws against burglary have our elected representatives chosen not to enforce? Share a link? I’ll wait….

1 gram is enough for a heroin buzz however the law is not enforced for users up to 5 grams. That 2 days worth of heroin. Translation: that’s 2 days of a heroin wackadoo hanging around. You know, shoplifting and property crime to pay for the next dose of heroin. Al legal here, no where else.

Anyone else wonder why Seattle has so many homeless bums addicted to drugs?
Yep, public policy.

Survival schmurvival, they are all crimes PERIOD. Why do YOU want to dumb everything down? Further lowering the bar is NOT the answer. Enforcing existing laws are a good start. Putting your eggs in the government basket seems to be the problem here. Talking about a giant disconnect. Seems to me this is part of a larger evil scheme to allow a certain amount of this crap as to then use it to pit neighbors against neighbors. Without their permanent underclass and incessant chaos WTF would our feckless leaders have to do? Seems apparent to me too many haver bought into just this and have adjusted their lifestyles and accept it. BEND OVER, GRAB YOUR ANKLES AND ASK FOR MORE THEN.

Yes, that’s exactly correct. Random street crime is part of an evil plan by our elected representatives to pit neighbors against each other.

Get a grip. Seek help, for your own sake!

so politics is NOT about dividing people? Blacks/ Whites, gun owners/ gun haters
abortion is NOT decisive? Put down your comic books and pay attention.

Right wing politics is about dividing people, we see it daily from the president*. I see a lot less of that from moderates.

You don’t like abortion? Fine. I respect your right to choose not to have one. Please respect mine.

never mentioned my views on abortion.

“It’s disgusting — it reminds me of the 1930s in Germany,” Nadler said.
Nadler is a Democrat. where i live comparing anything to NAZI Germany would be divisive.

Jesus, you can’t write this stuff. Not even a bleepin’ week.

Feel free to move then, since you hate it so much.

I just told my wife the other day we should visit the new Target before the bums trash the place. Too late.

You’re free to leave at any time, boomer.

I looked for a police report of the Target incident and it seems you found one? Can you provide a link to the high school kids info, please?

anyone that would argue on the behalf of junkies thieves and their “rights” is pretty funny. like, just-discovered -“social justice 101”- at -their- local- community college sort of funny, maybe 4 months removed from living with their parents sort of world view funny.

Until the police report and/or further evidence is released, any people speculating, be it drug addicts or high school kids, are just plain morons and should treated as such.

Get used to lots of crime.

You voted for it.

With Sawant in charge and most Councilmembers, including Strauss towing the line, more derilicts are coming.

Notice that creepy looking asshole on your last outing in Ballard? Yeah, it was him. Or one of his friends.

What’s obvious is you have a poor grasp of the situation. This country has a shredded social safety net, a crisis in affordable housing and an opioid crisis. None of the current council is responsible for any of that. The progressives on the council are fighting an uphill battle to ameliorate some of the massive systemic problems we face.

Well said Nick. Thanks for bringing a rational voice to this forum. Keep up the good fight!

I actually agree with you, partly. We certainly need more treatment, and more shelters and housing. Where I differ is the lack of enforcement. I know the SCC doesn’t direct Pete Holmes, and they have little control there. But what I do see is Sawant and her cronies demonizing any attempt at policing – going so far as to call the police murderers.

Many mentally ill/drug addicted felons are loose on our streets. They are deemed unable to stand trial, yet they are released. I would like to see the SCC step up, and HELP the police enforce law, not beat them down and devalue them.

Why can’t “progressives” also be pro-law enforcement? It’s routine in other, liberal cities, such as on the East Coast.

A good example is the emphasis patrols this summer. O’Brien and Sawant were against them, against additional police presence. Why do you think they were?

I really appreciate the sentiment here but more so the tone. Will this actually be the civil conversation on this topic I’ve been hoping for?

Agreed on the sentiment here, and on the SCC helping law enforcement handle this difficult problem.

Affordable housing, an improved social safety net and effective opioid treatment would free up law enforcement to deal with the minority of homeless who are violent.

Bingo.
More police lead to safer streets. Just their presence alone created a safer environment for business owners, many of whom are our neighbors.

Why are heroin addicted criminals living in our parks and streets so afraid of increased police presence?
Oh wait, got it.

Why is consignment moving? Was the building damaged in the fire?

Shoplifting and vandalism at a business in Ballard? Shocking.

Thanks Social Justice dippy dips for increasing the cost of goods across the board (ie. theft and shoplifting leads to increased prices) and more heroin addled free loaders getting what they want as residents and businesses just sit and take it.

But wait, Dan Strauss will start to make people accountable and keep streets safe. Hahahahaha, yea right.
Not that the bums care but Target has one of the most sophisticated shoplifting prevention operations in all retail. They are going to be busy!!!

Remember to watch out for human poo and needles!

it s a lot opinion.

There are plenty of cops who walk around writing parking tickets why can’t we have a few walking around actually stopping crime?

I’m sure these were career criminals and not our most vulnerable community members we hear so much about. Of wait, they’re one and the same.