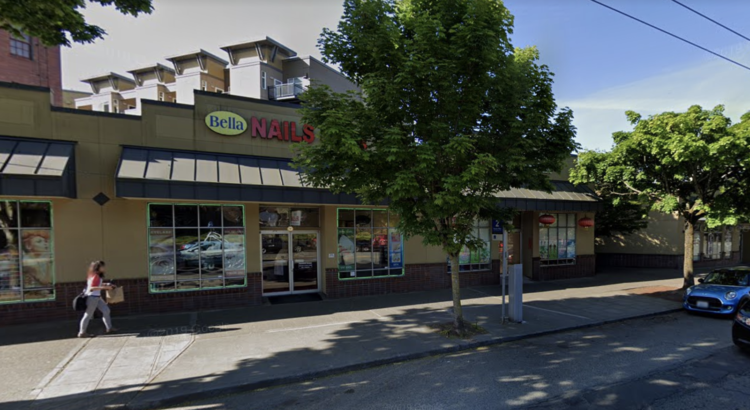 The man who stole a woman’s purse and fired his gun in Ballard earlier this month has been arrested.

On Nov. 5, the suspect grabbed a woman’s handbag in front of Bella Nail Salon near the corner of 20th Ave NW and NW Market St. When a bystander tried to intervene, the suspect fired one round into the ground. The robbery victim then attempted to grab onto the fleeing suspect’s vehicle and fell, sustaining injuries.

The suspect fled the scene in an SUV, and police lost track of him later that day. SPD released surveillance images in the hopes someone would recognize him, but the suspect was still at large until this week.

According to Seattle Police, officers in Kent have now arrested the 30-year-old suspect during a car prowl investigation. Police recovered a handgun, believed to have been the same one used in the Ballard incident. He’s been booked into King County Jail.

Thankfully we live in a city that doesn’t just throw people in jail, so there is hope he can be rehabilitated (but that’s his choice)

liberals will not see your humor. the criminal is “their” people.

What else is here BUT liberals? Most refusing to own what they’ve foisted upon the region. Guilty white folks with BLM or nobody is illegal signs stuck in their front yards. This way of life/attitude is certainly working well here isn’t it, except if crime and incessant theft is your idea of stability. My city has left me……………..

Blaming liberals for the opioid addiction issue, homeless issue and crime, just shows how truly ignorant you really are. Haha, but go ahead and just continue to sit behind your computers doing nothing and blaming others as the problems get worse, that’s what liberals want and people like you are the reason they win elections every year.

Blaming Liberals is pretty easy to do. The Governor, Mayor, city and King county councils are LIBERAL. Period. No Liberals did not invent Drugs, nor did they invent homelessness. They DO enable it through not throwing people who break laws in Jail, allowing them to continue breaking the laws, putting YOU in jeopardy. I do agree with you though, someone here is truly ignorant. HaHa

They don’t throw them in jail because the prosecutors are weak kneed weenies. Many would like this felon to come live with YOU. Please take him and many others into YOUR home, and leave the rest of us alone. Can’t fix stupid

Let the robbery victim and the good samaritan take pot-shots at him – a full clip using rubber bullets. These won’t kill him, but they will hopefully make him think about firing his gun in a crowd of people again.

Thanks to MyBallard for following up. Please track this case as it goes through the system. It might help sort out the questions about whether Ballard criminals benefit from catch-and-release non-enforcement policies.

That’s good. Keep him off the street for at least a day or so.

They will turn him loose in a few days as usual !

Glad you caught him. Don’t let him go free to do the same crap again, you mooks.