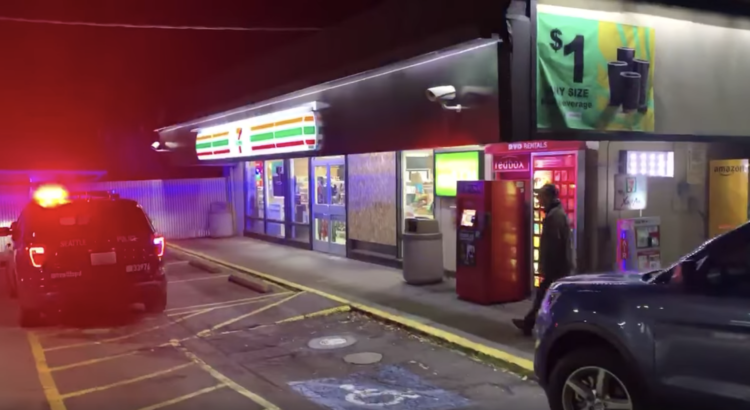 The incident was first reported in the My Ballard Group — Lauri Miller shared the news with the above photo. She says police on the scene told her it was an armed robbery, but no shots were fired and there were no injuries.

KOMO reported that there are four total suspects, two of which were armed during the robbery. The suspects waited until the store was empty before entering, around 8pm.

Other group members reported seeing the K-9 unit in the area and police searching for the suspect.

We have a call out to Seattle Police to learn more and will update with any new information.

Turned on the scanner and heard the K-9 asking for a back up with a rifle. Brazen and right in the face of all of us. Sad that this is city has gone to crap. Sad that if caught the perps won’t be prosecuted, due to the lazy inept Pete Holmes and Dan Satterberg. Sad that many here seem to adapt to becoming LA, Chicago, Baltimore.

Sad that this is city has gone to crap.

And yet you’re still here, so it can’t be that bad…unless you love living in crap cities?

Please don’t call Seattle a crap city. If you don’t like it so much you can leave.

Someone has also never been to LA, Chicago, it Baltimore (and clearly avoids actual “bad” neighborhoods.

I wonder if they just considered closing their entrance to the main street, this seems to be working with the courthouse downtown.

Agree. people have been sticking up 7 Elevens since they opened. Doesn’t matter where they are located. glad no one was hurt!

Lazy and inept members of the community such as yourself who just troll and blame others don’t help either.

Paintking is back to eating Paintchips. if you want a city with no crime, move to north korea. crime has always existed in seattle and in ballard.

Paintking seriously needs a life. Most of us haven’t posted here in years, and he’s here every day with all that anger. Pretty pathetic, sad life to live.

Don’t blame others because you are lazy.

at first i thought this was by my house, as i know the folks who work there i was angry.
it is a different store, but somebody knows someone who works there. I hate people who steal.
Maybe they will resist arrest. as that seems the only justice seattle politicians can’t screw up.

your suggestion smacks of vigilanteism… THAT does nobody any good.

actually your comment is ignorant. “resisting arrest” involves the POLICE, not citizens.
So “vigilantism” spelled correctly here,was a figment of your ignorance.
Would i lose any sleep if these armed criminals were shot resisting arrest? Not a wink.

If this happens too many times store clerks will start arming themselves again.