No school (or snow) today, but prepare for the wind – My Ballard Skip to main content 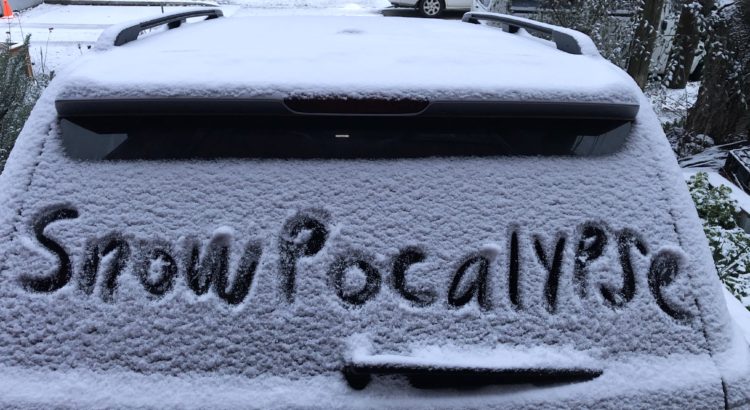 Last night’s snow forecast seems to have mostly missed Seattle, but the National Weather Service is saying winds could pick up to 25 – 30mph gusts today.

So what happened to the snow? The NWS says warmer southerly winds came through central Puget Sound last night, which kept Seattle from getting much snow — most of the snow fell to the north in Skagit, Whatcom, Clallam and San Juan counties.

But, with the snow forecasted yesterday, Seattle Schools preemptively cancelled classes for today, partly because it was already a planned early-release day.

The forecast now calls for rain instead of snow, with temperatures hovering in the 40s for the rest of the week.

Thanks for the photo, Brian!

Apparently you don’t even have to have snow in Seattle, to have a snow day for the schools.

They have to make the decision to cancel the night before. Once that decision is made, they can’t go back.

Who runs this city smart ass? I’m certain everything she does is just perfect with you, right? Explain Sawant too for us darling? Move your wallet, you are once again mumbling, you man hater.

you made that up, we know it. get your GED, while schools are open.

The Seattle Public School District said the main factor in canceling school on Wednesday was the district’s already-planned early release. Now, students will have to make that day up at the end of the month.

Tuesday night, the district alerted parents that it would cancel classes on Wednesday. On Monday and Tuesday, the district issued two-hour delays because many in the area were dealing with light snow and cold temperatures.

Do you try to be wrong all the time or does it come naturally?

Given the temps, ice, conditions of side streets, SPS probably would have done another 2 hour delay, and since Wednesday is an early dismissal day, why not just call the whole thing off. Seattle Public Schools Mantra: Stay for Hard facts and high information.

Sorry. To me this teaches weakness and how to act when the going does get tough. If we can’t handle 1-2″ of snow, then I fear for these kids when they have tough times down the road. How do they then handle a real crisis? Kids aren’t stupid, they learn from this. Most also want out of school in early June, not late June or into July.

To me this teaches weakness and how to act when the going does get tough.

That’s rich coming from a snowflake who constantly whines about every little thing that triggers his fragile little ego!

Mocking triggers IS NOT funny

sorry, no one cares. put down the graphic novels and get your GED.

Great comment! Although, using such wise words only confounds/confuses the wizards of smart here.