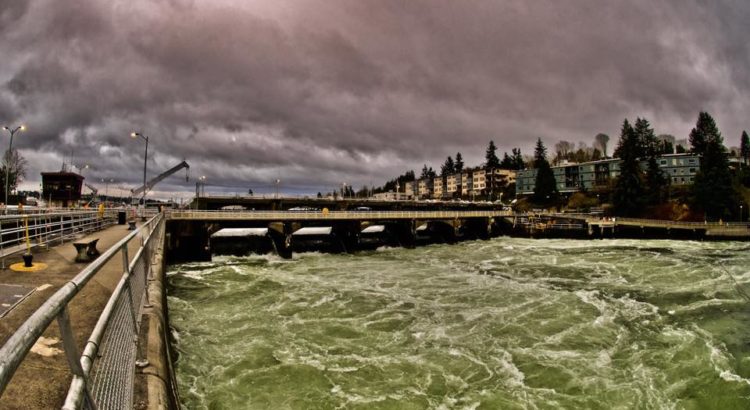 Even after the largest water flow event at the Ballard Locks in recorded history, the operation to refill Lake Washington starts tomorrow, Feb. 15.

The peak inflow rate was at its highest from Feb. 7 to 9, recorded at between 15,000 and 16,000 cubic feet per second (average flow is 13,700 cfs). With the huge amount of water moving through the Ship Canal, water managers at the Locks were releasing 13,500 cfs from the spillway, the maximum spill capacity for the current lake level.

The typical annual refill will bring the lake to an elevation of 22 feet, which is enough to meet increased summer water use, which the Army Corps says will provide water necessary for fish passage, navigation, and salinity control

The Army Corps says that during the refill, vessel owners should closely monitor lake elevations and adjust mooring lines as necessary. Those who live or do business along the Ship Canal or in Lakes Washington and Union should expect a gradual rise from the winter level of 20 feet to the 22-foot target by June 1.

If this all sounds fascinating and you want to keep updated on the Lake Washington water status, you can follow along on the Corps’ Seattle District Reservoir Control Center website.

“Detailed record keeping began in 1946”. Umm, let’s see here: that’s 74 years, which for many is like forever dude. They lower levels on the lake to diminish shore damage, etc. Nothing new there either.

i am sorry your life is so sad, you see pain everywhere. no joy only anger

Considering the locks have been there almost 103, that means the info has only been recorded about 75% of the time. Also, take some history classes. You need them.

Your article is very useful, the content is great, I have read a lot of articles, but for your article, it left me a deep impression, thank you for sharing. basketball legends

Good news. The lower levels are not good for canoeing around the Arboretum area. Luckily there are a gazillion other places to canoe. lol. I like to launch by the Ballard Maritime Academy. Lots of free parking, and it’s cool to float around a working maritime area, boat building, fishing boats, even exploration vessels.