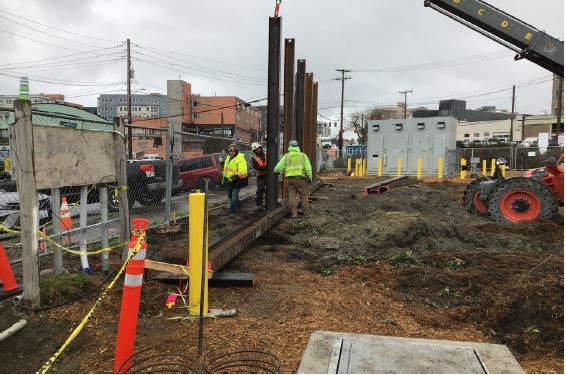 Seattle Public Utilities (SPU) and King County Wastewater Treatment Division are building an underground storage tunnel to reduce the amount of polluted stormwater (from rain) and sewage that flows into the Lake Washington Ship Canal, Salmon Bay and Lake Union from our sewer system.

SPU says construction of the 12-foot-high sound containment wall will continue through April. Crews have also been removing curbs, mulch, temporary fencing and asphalt at the construction site. Expect crews between 7am and 5pm during the week, with possible evening and weekend work.

Nearby businesses and residents should expect the following:

Construction will start on 11th Ave NW and NW 45th Streets (near Fred Meyer, see below map) as early as April 15 and is expected to last a few years, until early 2023. The first few months of work will include site preparation; setting up fences and removing trees, installing stormwater control and soil monitoring equipment, relocating an existing waterline, and stabilizing soils for underground construction work.

Starting in mid-April, crews will be at the east Ballard site from 7am to 5pm Monday to Friday, with some evening and weekend work.

There will eventually be a full closure of NW 45th between 9th and 11th for 15 months beginning in 2021 — we’ll update on that when it gets closer.

To learn more about the project and its various sites between Ballard and Wallingford, click here.