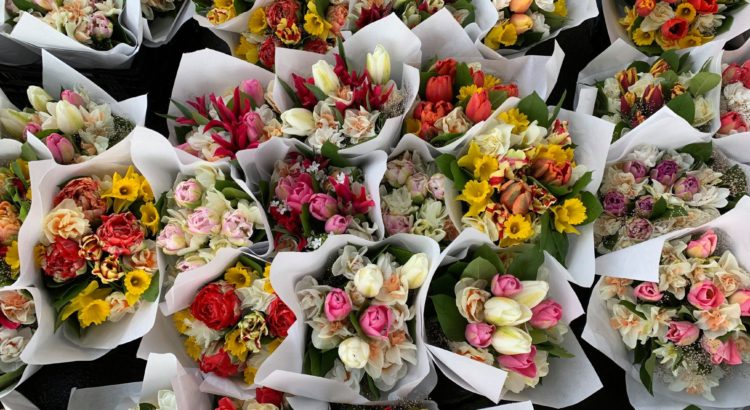 The flower bouquet fundraiser that started in Ballard earlier this month raised over $1,000 and 700 pounds of food for the Ballard Food Bank last week.

Ballardite Roger Dowdy launched the fundraiser a few weeks ago after hearing about his friend’s efforts selling Hmong flower bouquets in Leschi. He wanted to support the flower famers that sell bouquets at the Ballard Farmers Market each week, and connected with the Hmong Association of Washington to organize weekly flower deliveries for Ballard.

Dowdy said he tried to get flowers from the same group of farmers that sell at the Sunday market, but the Hmong Association represents farmers from all over western Washington—not necessarily just those who sell at the Ballard Farmers Market.

Funds from each $15 bouquet go straight to the farmers, and buyers have the opportunity to give extra, with any additional funds over $15 going straight to the Ballard Food Bank.

In just a few weeks, the flower deliveries have exploded: a volunteer in West Woodland, Lisa Zook, is delivering them to people in her area, and Dowdy said they’ve expanded beyond Ballard to include deliveries in Queen Anne and Magnolia.

Last week, they sold over 500 bouquets and delivered to 270 different homes, helped out by 14 groups of volunteers who offered to help distribute the flowers around the neighborhood. Many people who purchased bouquets also set out food donations for the Ballard Food Bank—Dowdy said they delivered three carloads of food last weekend.

“It’s been amazing to see the community come together and support farmers and the food bank, and number of people giving extra funds has been remarkable,” Dowdy tells My Ballard.

Dowdy says that the online order form will be up until Wednesday at 8pm for deliveries each Saturday. Dowdy said he and the volunteers will keep doing the deliveries on a week-by-week basis, and expects Mother’s Day to be a big delivery weekend.