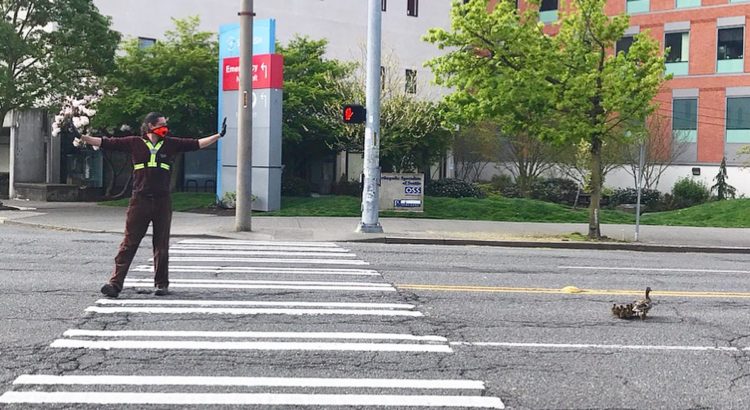 In what’s become a yearly tradition, a Ballard resident has rescued a brood of ducklings from his second floor apartment balcony on NW 56th St near 20th Ave NW.

Nathaniel Peters has coined the rescue operation “Ballard Mallard Duckling Drop Day,” which he says has been an annual occurrence.

“For the fourth year in a row, a female Mallard (I believe the same bird each year) has made her nest under a bush on my Ballard apartment building’s second floor balcony,” Peters shared on social media. During the first duckling rescue a few years ago, he contacted local animal rescue workers who recommended lowering them in a basket to the street.

Peters was told that ducklings can usually manage a jump from that height, but the solid balcony walls at his apartment have prevented the ducklings from making it safely to the street to rejoin their mother.

“She and her ducklings must then brave half a mile of city streets, cars, dogs, gulls, crows, and storm drains to get from their nest to the safety of the waterfront at Shilshole,” Peters writes.

Peters assembled a small team—just his partner and neighbor—and collected 15 ducklings from the balcony in a homemade, “duckling elevator.” They then began guiding the mother duck and her brood on the half-mile walk to the waterfront, stopping traffic so the ducks could safely cross the streets.

“This experience is truly exhilarating and always one of the high points of our year,” Peters writes. “It is a small but important way that we have chosen to give back to our community, and we believe that actions like this are so important right now.

“I am so touched by the outpouring of support for our team’s efforts and so very pleased that this story is bringing encouragement and joy to others,” Peters tells My Ballard.

Photos and videos by Nathaniel Peters

This is a beautiful, beautiful story. Congratulations to everyone, including Mama Duck!

Nice! Glad they are safe.

I’m not an expert in duck biology, but image that mamma duck moving around with 14 baby duck sized eggs in her, damn.

Obviously you are not even close. Just Google wild ducks and you could learn a lot.
https://petsgetstarted.com/how-many-eggs-do-ducks-lay/
Now if you can figure out why domesticated fowl lay eggs all the time for a few years you might get a prize. Or a surprise!