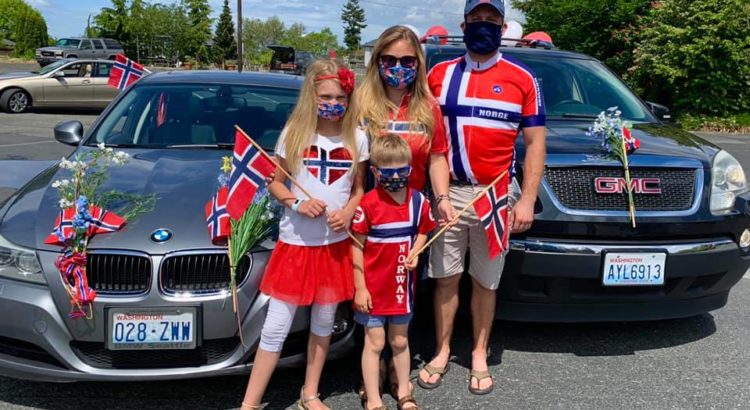 A pandemic won’t stop some Ballardites from celebrating Syttende Mai.

Many in Ballard decided to keep the annual May 17th parade going with their own version of it, which involved decorating cars in Norwegian flags and driving around the neighborhood.

Heidi Larsen shared her photos from their parade on Facebook, saying this is the first time she hasn’t marched in the parade in her bunad since she was young, but that she and her family had a blast anyway.

The car parade made its way down to central Ballard, up to the Norse Home, and then to Shilshole Marina. Here are photos from the parade, all taken by Larsen.

Thanks for sharing your photos, Heidi!

How great! Wish I had seen them and joined in.

They passed by our place yesterday and it was really great to see. Definitely miss the parade!

We saw them as they turned onto NW 65th Street at 24th Ave NW. Absolutely warmed my heart. In fact, I may have shed a tear. We love the parade and attend every year. This impromptu parade, a delicious meal from Skål and some aquavit made it a Syttende Mai to remember. Thank you, paraders!

Many don’t realize that next to the celebration in Bergen, this parade is the 2nd largest, in the world. My grandmother came to America in 1889 from what today is Bergen. Ya sure. She didn’t complain and assimilated rather nicely, learning the language and eventually opening a restaurant.