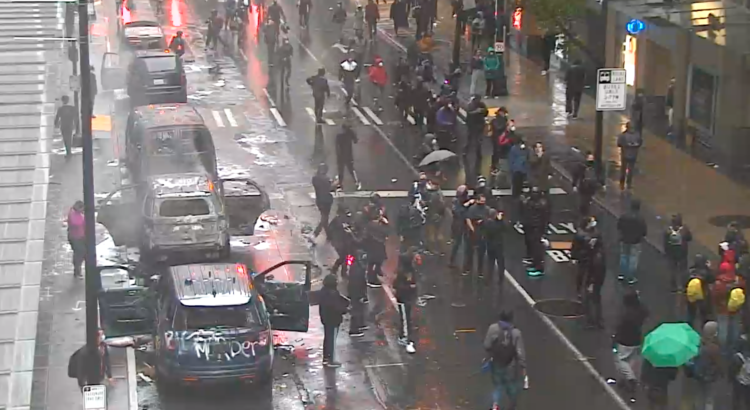 Update Monday June 1: Mayor Jenny Durkan has extended the citywide curfew today, starting at 6pm Monday evening and finishing at 5am Tuesday. A city news release says that during these hours, residents and visitors should remain in their home to the extent possible and should refrain from traveling in and through the entire City of Seattle.

“The curfew is intended to prevent violence and widespread property damage, and to prevent the further community spread of COVID-19 through continued gathering. The City encourages all residents to sign up for Alert Seattle to receive notifications about the curfew directly to their mobile device.”

Those commuting to work will not be impacted, nor will people experiencing homeless, people in medical emergencies or dangerous situations, first responders, health care workers, and news media. The curfew does not require businesses to close while it is in effect, though businesses may close at their choosing.

Saturday May 30, 6:30 pm: In a live press conference, Mayor Durkan says the curfew applies to the entire city, not just the downtown area. That means Ballard and surrounding neighborhoods are now under a mandatory curfew.

“We are still in a pandemic,” she adds. “These are two things coming at the same time, which makes it harder for the city to deal with.”

5 pm: With protesters burning vehicles, blocking I-5 and setting fire to at least one business downtown, Seattle Mayor Jenny Durkan has announced an immediate curfew from 5 pm to 5 am on Saturday and Sunday.

Residents are asked to “immediately disperse from downtown” and remain in their homes. While the curfew appears to be citywide, police are immediately concerned with the situation downtown.

Seattle joins several others cities enacting curfews in the wake of widespread protests over the death of George Floyd in Minneapolis.

I’m going to take my life into my own hands and pick up my pizza at Sunny Hill. I would risk prison for that pie.

I hope the My Ballard Facebook group is all glued to their scanners! Such an exciting evening!

Nice social distancing here. All OK’d and justified by our feckless leaders. Just do NOT get your hair cut or go play tennis. Taking it 1 step further here: why is it high school seniors can’t have a graduation ceremony, yet these fine folks were OK’d???? Doing anything else might just have you get a fine and comrade Inslee wagging a finger at you. Check the abortion rates in NYC alone. Then ask yourselves if black lives matter. Seems Mr. Floyd’s death COULD’VE been used in a better way. MLK is rolling today. So sad his legacy has become anything but what he stood for.

More Leadership from a Liberal Politician.

i actually agree with you. MLK was for the CONTENT within. Today its all about the color of your skin. Content not needed. To Many in the Black community because I was born White I am PRIVILEGED. I was able to attend public schools and make choices, for the most part, on decisions affecting my life. So did they.

You can only get COVID when right-wing loons have protests.

When left wing loons do it, you get a new TV.

Haven’t you read the science?

Off your meds again, terryj? Posting the same comment in multiple threads — some that have nothing to even do with paving Market St. — don’t help paint a convincing picture of your sanity.

actually i was very effective. it got even your attention. “Renew THEN Repave Ballard’s Mkt st.”
I want Ballards (not sure where you live) businesses to get up and running again BEFORE they tear up the streets again, which is BAD for Business. Nothing radical or obscene porky.

that was a cute touch by our blundering mayor to announce last nights 5pm curfew at like 4:45! did she send a team of magicians to make everyone disappear? she is as useless as our last several mayors but still unfortunately the only choice we had as Moon was completely unqualified as opposed to just the “pretty unqualified” that Durkan is.

Blundering? As useless as closing down flights from China after the virus had already arrived from Europe and China? That kind of blundering? Announcing a curfew is a way to strongly signal that people need to leave and give police an ability to enforce that. The reporting is that many people didn’t pay attention to the curfew but it was a method for government to try to bring peace and stability. Is there a problem with that? Perhaps you only think Republican mayors, for example Corliss P. Stone, are qualified? Or maybe it is the penis thing.

I see there’s a new sheriff in town….

“Or maybe it is the penis thing.” YOU made the decision to BE who you are. You can always go back if it didn’t work. Trade your flannel in for chiffon??? Have a Trumpalicious day honey.

this is hard, phrasing something you will understand will be tough.

so if 1 plane lands and contains the Virus, there is no reason to stop others?

As to Corliss Stone, sorry he is dead. try and keep up.

It wasn’t that “the people” didn’t pay attention to the curfew, they IGNORED it.

You must be new to Seattle. The riots this weekend have been going on for the last 25 years. Usually, it is something inane and pointless, this time they demeaned the death of an innocent person.

The fact that the mayor, Dow Constantine, and the governor didn’t see this coming and didn’t prepare adequately is simply mind-boggling and irresponsible. There is no excuse whatsoever.

there will be another election. vote a different party

we HATE those people, huh? not enough hate going around for you, change scares you
I think”westurngurl is looking for a friend