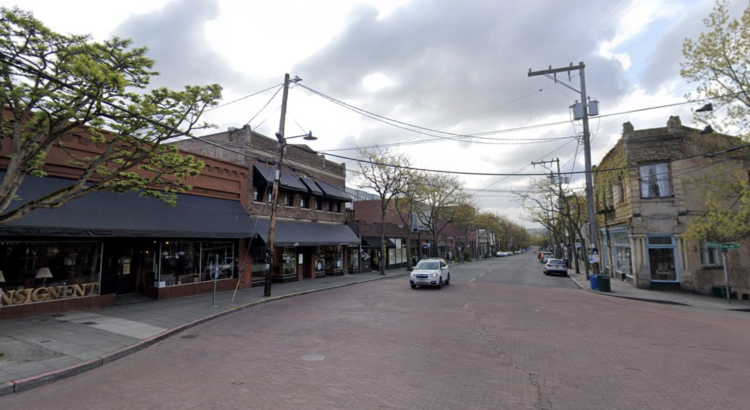 Seattle City Councilmember Dan Strauss is behind the proposal, telling The Stranger that the idea came about when businesses along Ballard Ave reached out asking if it was a viable option. He said he’s been working with city departments to develop a pilot program that could be rolled out as King County enters Phase 2 of its four-phase reopening plan.

Here’s what he told The Stranger:

There are still plenty of details that need to be considered: keeping a fire lane open, designating appropriate space for each restaurant, maintaining sidewalk access, and having about a half dozen city departments signing off on the plan, including the mayor’s office.

My Ballard has reached out to Dan Strauss for comment, and will update when we hear more details.

Rights-of-way, Dan. RIGHTS-of-WAY!!! Other than this I greet the news with a whoop and a holler. Great plan.

As a TEMPORARY idea to accommodate businesses slammed by the pandemic, yes.

Should we trust SDOT to keep its word and allow the complete street to revert to normal when restrictions are eased? Does the experience with “temporary” closure of 17th teach us whether to trust their promises?

Is there any reason for anyone in the neighborhood to drive down Ballard Ave?

Sounds like a great street to close down then.

That should not preclude parking!

Wow. Dan Strauss may actually be doing something I agree with. Granted, it will be festooned with drug addicts panhandling customers but hey, it’s a start.

Great idea. However I can’t see the city being able to do it. They’d put so many regulations, restrictions, certifications, licenses and fees that it wouldn’t make since for the business owners.
Simply allowing it to happen isn’t the Seattle way. Our leaders believe only they can make these decisions.

translation…someone had this idea, now its my idea. Unless it doesn’t work

What is wrong with a politician hearing ideas from others and championing one he likes?

Agreed, they most likely do that all the time.

I haven’t read all the comments yet but the first thing that comes to mind is where is the parking?

Walk there. The weather’s nice.

As it pours down rain right now. And is this also a solution for someone on Capitol Hill who wants to go to San Fermo or The Tractor or…

delivery trucks would deliver where, exactly? take out business would then halt (nowhere to pull up/park)?

plus, its inevitable zombie vagrants in the area would make themselves the nuisance they generally are.

plus, we pay taxes towards upkeep of city streets – we should be able to drive down any of them we please, at all times.

Save half your pork chop for Jimmy the Junkie. He needs it more than you do, fatso

Delivery trucks and local access would very likely still be allowed as it is on the streets that are closed to cars now.

And your taxes argument is pretty silly. You can’t drive down there during the Sunday farmer’s market…that goes against your logic of being able to drive down any street any time you want.

Plenty of other cities do this and it’s very pleasant. I honestly don’t get what the big deal is for closing this particular street to most traffic.

Streets that have more traffic need more maintenance. Yes, it would still need some maintenance, but not nearly as much.

Yikes, an article on turning a street over to the people as a way of reinvigorating local businesses and you go right to the homeless as usual.

Looks like you stopped getting treated for your homeless fetish?

OK so who’s going to keep the homeless out of the area and keep picking up all the sharps everyday ! And sanitize it after the homeless spent the night there after the restaurants and shops close ! The homeless will go threw the trash nightly to get food too and they will make a mess out of the place too ! GOOD LUCK !

Love this idea….right of way might be solved by reserving intersecting streets for deliveries…would timed delivery be workable i wonder….what a lovely idea thought generally……rain protection? Use this time as a trial run…..it might help if we worked with DOT instead of assuming the worst…..we can all work together if we put our mind to it…

This would be amazing!!

This really isn’t difficult. Deliveries up until 10:30am. At 11am, allow cafes to set up in the street. Everyone is so fixated on parking that they cannot see that the businesses that need the parking need the space in the street more. They could have an ambassador to the street that will usher people making trouble out, and greet those who need help with accessibility at the entrances to the block(s) (perhaps even with transport). Perhaps even the first 20′ of the street, across the entire street, could be dedicated to handicap parking.
The idea that streets should be dedicated to automobiles is so 20th century. Right now, the best use of at least some of old Ballard ave is to flex the street and have businesses be able to expand into the street. At the end of the experiment, we can evaluate whether it is an improvement worth implementing even when there is not a pandemic.
It is clear that shutting down streets for farmer’s markets is a huge success. This use of the streets deserves a try. If it is a fail, we can turn it back to fossil fuel burners.

This comment nails it. All of the issues that folks fairs above can be worked through. And obviously if the businesses on the street think that this is a bad idea it won’t happen.

Rain is the major issue, but it’s not as much of an issue in July and August. Parking is another issue, as this will eliminate some amount of it in a neighborhood where the parking is already tight on evenings and weekends.

If this works for the majority of businesses I would be all for making it a seasonal feature of Ballard. Almost every city that I’ve been to has pedestrian only streets or areas and most everyone everywhere seems to think they’re a good feature for all involved.

I guarantee that within a week, there will be tents in the street.

“We need to be ready to use our public space and public right-of-ways in a way that promotes our small businesses, protects public health, and increases the ability for pedestrians to use our public right-of-ways.”
That’s great–couldn’t agree with Mr. Strauss more. I wonder, though, how this sentiment fits with his “leave the campers in the Ballard Commons” position. The Commons would be a public space. Regular, safe access to the Commons would help restaurants/coffee shops/drug stores/ice cream shops in the area. I’m sure the residents of the apartments and condos who walk to Market Street and Ballard Avenue would like to walk through the Commons without worry about feces, needles, trash and blocked sidewalks. So, Dan, what’s good on Ballard Avenue should also be good at the Commons. Sam’s Sushi would certainly appreciate it if its customers could take food to the Commons, as would Parfait, Gather, etc.

Bottom line: Mr. Strauss, please protect our public spaces, don’t give them away.

It should be up to the businesses that occupy Ballard Avenue.

it’s right there in the article: “the idea came about when businesses along Ballard Ave reached out asking if it was a viable option”

i think this sounds like a great idea! Open the street up and encourage more commerce.

Based on current rules in the city right now, you probably wouldn’t be able to cram more than a few thousand into a tight space.