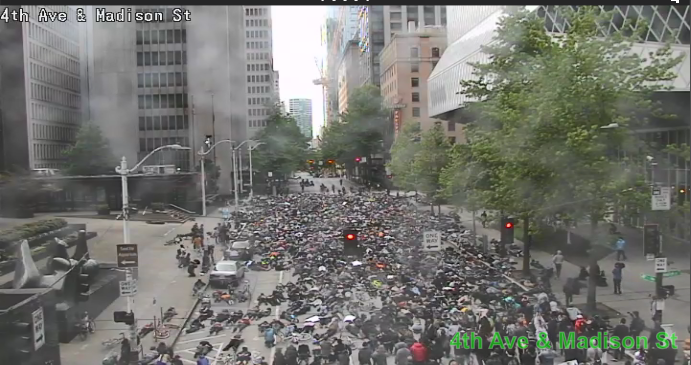 Update Thursday AM: As of Wednesday evening, Seattle Mayor Jenny Durkan terminated the nightly curfew. According to a city news release, the Mayor and Police Chief Carmen Best chose to rescind the curfew to, “ensure no peaceful individuals who were demonstrating were arrested.”

Last night was the sixth consecutive day of marching in Seattle to protest police brutality.

Original Tuesday PM: The City of Seattle will be under a mandatory citywide curfew for the rest of the week from 9pm to 5am until Saturday, June 6.

Seattle Police Chief Carmen Best made the the announcement this evening at a press conference as demonstrations continue for a fifth day.

The demonstration tonight is mainly centered around downtown Seattle, with thousands marching through the city.

Many businesses will be closing early as a result of the continued protests—it’s a good idea to call ahead before heading to any local businessess.

We’ll update with any new information as it comes in.

I think it’s great that COVID is in our rear window. That thing was awful.

Plus stores are open, if you have a brick handy.

Hey, I’ll bet after 9 PM, Dan Strauss will be “hiding” in his house.

We were all hoping you were gone also, but unfortunately, just like COVID, here you are again.

Looking by the size of our mass gatherings it looks like we defeated the virus!

Nope, there’s an expected flare up on the horizon thanks to the people who are most vociferous about social distancing choosing to completely ignore their own demands since it suddenly didn’t suit them anymore.

Racism exist around the world. As long as they Black community and its supporters choose to believe
Whites ALONE can turn it around, it never will IMO. Blacks are Racist as well. Looting and burning your OWN community isn’t the answer. Its foolish.

Racism exist around the world. As long as they Black community and its supporters choose to believe

Gosh, you mean all we had to do to stop racism was just stop believing in it? Freaking Nobel Peace Prize coming your way terryj!

you need to pay attention,engage your brain before your mouth.

“As long as they Black community and its supporters choose to believe
Whites ALONE can turn it around, it never will “

Honestly, that’s the stupidest comment I’ve heard in a while! So if I understand you correctly, what you are saying is that if Blacks stop being racist, and looting and burning their own communities, magically white people will stop hating and racism will go away?

I said BOTH White folks AND Black folks are guilty of Racism. until BOTH sides accept that, nothing changes. Which some people would be happy with. I am not one of them, you?

Are the effects of racism equal on both groups?

of course not. less racism would be good for all, don’t you agree?
I attended Coleman elementary school, i was the minority.
Coleman is now the African Heritage Museum

I’m sorry that you went through whatever it is you are hung up on. I am sincere about that though, you being a minority in elementary school isn’t equal to generations of experiences so forgive me for not marching for you.

i went through nothing. but i just may have spent more time within the Black community then most, here in Ballard. I have worked with Blacks, served time in the Army with Blacks my next store neighbor is Black as is a friend at the end of the hall. But i am sure most here are wiser. But whatever YOUR doing to lessen the problem IS NOT WORKING. You have failed. Oh well

Inslee apparently is far more worried about some guy wanting to cut people’s hair for money to feed himself. The State is using more resources to go after people breaking the lockdown than they are going after people who smash windows, steal and burn cars and buildings.
What represents more risk. Some guy getting his hair cut or a riot? I thought this was supposed to be all about our safety.

The State is using more resources to go after people breaking the lockdown than they are going after people who smash windows, steal and burn cars and buildings.

That’s like saying Diary Queen spent more cleaning up spilled sodas than they did refining petroleum. I’m sure you had a point, but it was lost in your meaningless comment.

Did you not hear? The riots aren’t riots, the looting is justifiable redistribution of wealth. Property destruction is the only path to equality.

Our DemSoc overlords said so.

Looting is good. Its the peoples right, to rise up. Abolish the Police Dept. Let the looters and demonstrators Police the city of Seattle. The Police are the enemy. Its time to Rise up. what do we want??????when do we want it??????????