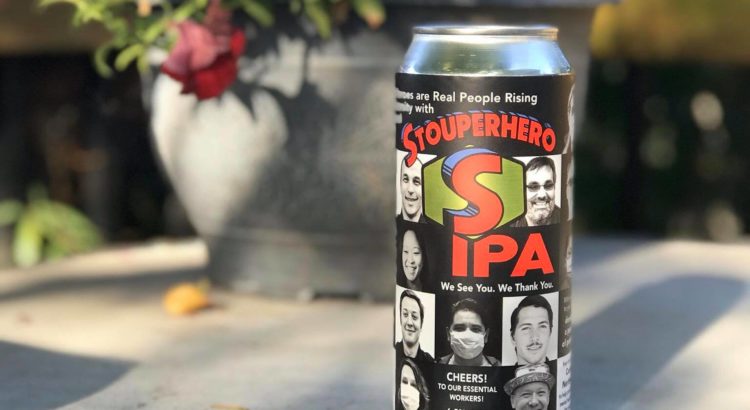 Stoup only started canning their beer in the midst of the pandemic; as co-owner Lara Zahaba tells My Ballard, “cans turned out to be a lifeline for us too and we started putting beer into them as fast as we could.”

“Before we had put beer in a can for the first time, we were thinking about how cans could help us give back to the community that supports us,” Zahaba says. The idea for a Stouperhero series came about, which she says, “highlights the everyday heroes we see around us.” The brewery partnered with local nurse and artist Mary Larson to begin a series of portraits that would become labels for their canned Stouperhero beers.

A portion of the Stouperhero beer proceeds goes to Code 4 Northwest, a local organization that provides mental health care to first responders.

“We know this pandemic is taking a toll on the people working the front lines everyday,” Zahaba says. “We need them to receive care too.”

The first Stouperhero beer is an IPA, brewed with Citra and Strata hops, which they started selling last week. Keep an eye on Stoup’s Facebook page for future beers in the Stouperhero series.

Remember back when we thought these people were heroes? No we hold rallies that endanger them. The times have changed.

I am very glad to have the opportunity to share useful information with you. So, I have been playing on the site https://nodepositz.com/fortunejack-casino/ for a long time with top online casino platforms. This was a new discovery in my life.