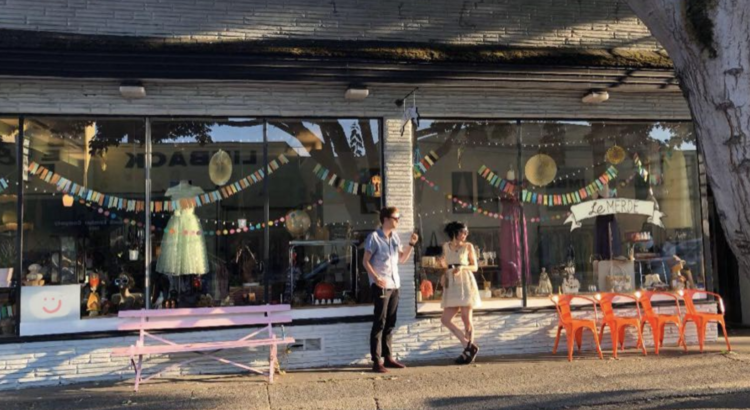 The boutique vintage clothing and art store Le Merde (2607 NW Market St) is closing down at the end of August.

Le Merde, which opened in 2014 in Greenwood and moved to Market St in 2017, was one of the businesses hit hard by the Market Street construction over the past year. The forced COVID-19 closures further decimated business, owner Debi Boyette tells My Ballard.

“I could not afford to go into debt by being closed,” Boyette says. “I depended greatly on foot traffic and wasn’t prepared to be an online business at the time of closure in March, so our sales went down almost 100 percent.”

Boyette says she applied for economic assistance grants and loans, but wasn’t approved.

“I didn’t qualify for a PPP because I had a loss in profit last year due to the construction. I also applied for the all the disaster care loans and grants but had no luck.”

Despite reaching out to city officials for help and guidance, Boyette says she has no option other than to close her brick-and-mortar and move to online sales.

On top of a major drop in sales, she has two kids and is anticipating having to homeschool them this fall. She says it’s just not feasible to run the shop by herself with the possible continued school closure.

Boyette will be serving customers by appointment only until the end of July, and potentially in August. To book, visit the Le Merde website or message the shop on Facebook or Instagram.

I wonder how many businesses will meet a similar fate when the city repaves the other half of Market Street. It seems like such a cataclysmic impact on businesses should be mitigated by either 100% B&O tax relief and/or hardship grants. The city’s current “suck it up” attitude seems off-key, especially now.

A good business can overcome a bad year. That was last year with the poorly executed road construction. Covid represents a second bad year which is hard to survive even for the strongest of businesses. Wish her well online. Hopefully she can still get some sales there.

What an incredibly arrogant statement. You’ve obviously never run a retail company before. Dunkin Donuts just announced that they are closing 450 stores today. Nordstrom announced they will build no new stores. These are publically traded, national brands with access to huge amount of capital.

A small retailer doesn’t have those options, so the fact that they stuck it out as long as they did is admiral. Moreover, the city of Seattle is doing everything possible to kill small businesses.

As a business owner myself I can verify that two bad years in a row would cause me to close my doors. You are going to have to explain what is arrogant about that. The mass majority of business owners will tell you the same thing.

Your analogy sort of backs up what I was saying. Although they’ve only had one bad year and they are already downsizing. If they have another bad year next year I wouldn’t expect them to survive either. That might be arrogant to you but it is simple business economics. No revenues for two years is hard to overcome.

My point is that the city inflicted these wounds on the retailers without real regard for them. The business shouldn’t have to “endure” YEARS of interruption. Now, it’s going to happen again with the repaving. We’re going to see an enormous number of vacancies.

Perhaps I took your point wrong. If so, I apologize. I took it that businesses need to be “strong” to survive. Of course, that’s true. However, my point, is that the businesses shouldn’t have to be in this situation in the first place, or at least not to this degree.

The city had the opportunity to route the trail behind this business along the public right of way near the railroad tracks. The construction would have been much less disruptive for businesses along Market Street and parking in front of the Market Street businesses could have been preserved. The reason the route for the trail along Market street was chosen was ironically for businesses and jobs. This shows that certain businesses that are politically connected and obnoxious get what they want.
A trail along the corridor closer to the water would have had other advantages as well, including it would have been safer with less driveway crossings and one less hill