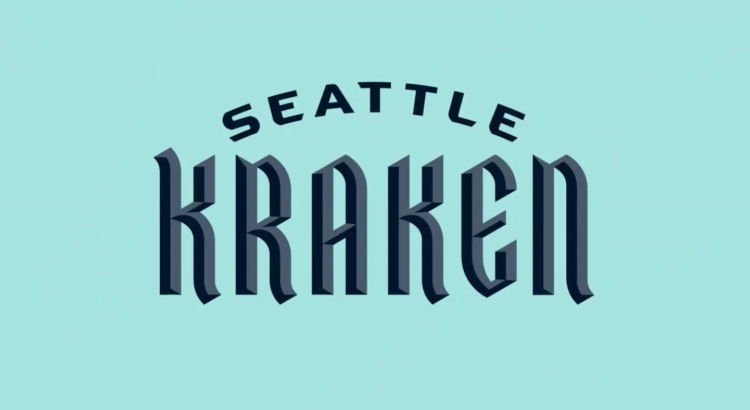 After all the hype, Seattle’s new pro hockey team finally has a name.

Or is it, The Seattle Kraken?

The name beat out other fan favorites such as the Sockeyes, Totems, Evergreens and the Emeralds, to name a few. The Kraken will be playing at the upcoming Climate Pledge Arena, formerly known as KeyArena.

And why are we posting about this on My Ballard? I’m glad you asked. A Kraken is a “legendary cephalopod-like sea monster of gigantic size in Scandinavian folklore,” Wikipedia explains. “According to the Norse sagas, the kraken dwells off the coasts of Norway and Greenland and terrorizes nearby sailors.”

So… what do you think of the name?

I like the name but the logo needs more tentacles.

I agree 100% Cap. The krakers and krak hos will cheer on the cities appropriately named krakheads, as they skate around the krak house.

Kraks me up. Will they become Krackers?

what do you care? you won’t be going to watch.

Glad they took the oversized homeless population into account to make it sound similar to crackhead. Alternate mascot is a bum injecting heroin into his arm. Nice!

Your stupidity must be exhausting? Probably nap time for you?

Just got up from my nap time at the heroin den at Ballard Commons!
Where’s my meth stash?!?!?! Garghghahahgh
Oh well, I’ll just parade around Market and Ballard Ave yelling randomly and urinating wherever.

After I have my heroin dose of course. Can’t control the addiction so I’m glad Seattle allows it. Thanks for enabling all! Does anyone know where I can find some bikes?

Just got up from my nap time at the heroin den at Ballard Commons!
Where’s my meth stash?!?!?! Garghghahahgh
Oh well, I’ll just parade around Market and Ballard Ave yelling randomly and urinating wherever.

After I have my heroin dose of course. Can’t control the addiction so I’m glad Seattle allows it. Thanks for enabling all! Does anyone know where I can find some bikes?

Yikes! If a homeless person triggers you that much, maybe you aren’t cut out for the real world? Better stick to your neighborhood blog troll job 👍

He’s not even good at trolling!

I am a homeless heroin addict wanted in 2 states living in the Ballard Commons. How dare you shun me insensitive NIMBY!
You “housed” people have it sooooo lucky. It’s about time you gave back to the homeless, like me!

Here’s a song for the Ballard homeless enablers, from my heart:

You need to clean the meter up, also, your rhyme scheme leaves much to be desired. Keep it snappy, leave them wanting more!

The only people I’m aware of that enable any of that behavior is the “Safe” Seattle crowd that opposes any and all attempts to fix the homeless crisis.

If you think there are people in Ballard that actually believe the things you claim, you are so far removed from reality, there’s really no hope for you.

Now the question I have for you is: do you actually believe the drivel you post or are you just trolling for the lulz?

How dare you! Look, it must be nice living in a fancy house in Ballard but I’m just trying to refuse services and shelter so I can continue my heroin addiction. Is that OK Mr. NIMBY?
I’m totally respectful, bringing my urine jug everywhere I go and throw out my heroin needles on the sidewalk so people can see them.
Don’t lecture me. I have no accountability at all. Leave me alone to do whatever I want. Shame on you for picking on the homeless.

Thank you for the feedback Ballard by Boat. Promise not to steal your bike.

I need one of those team bags to put my crack in. See what I did there?
It’s a storage device for my drugs and it’s called Kraken.

Truth must be sad the “Seattle Cucks” didn’t win.

UPSers is not only exclusive but is strictly limited to every vendor or employee who is a part of the UPS Logistics Company. It is extensive and is very informative for all the employees. https://upserss.website/
can get all their information like their salary, leave requests, raise tickets, and other employee benefits from UPSers.