Ballard and Magnolia lead Seattle in mask use, survey finds – My Ballard Skip to main content 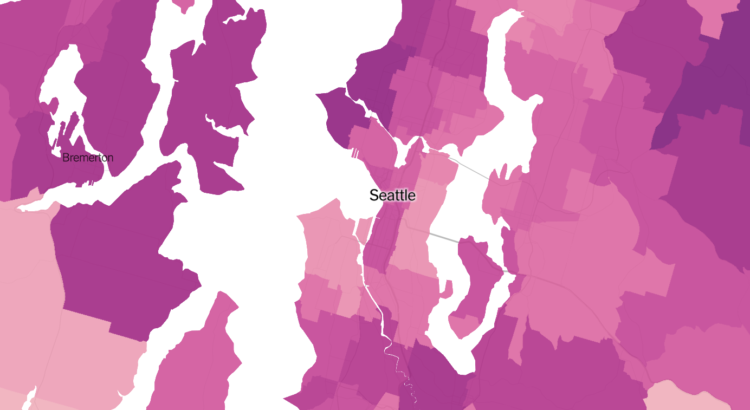 Surveys about masks are always a little tricky because people often say they wear a mask, but in actuality may not be so diligent.

That said, 85% of Ballard and Magnolia residents say they always wear a mask when they “expect to be within six feet of another person.” That number tops the list in Seattle, according to survey data compiled by the Seattle PI via the New York Times.

Over in Fremont, 72% say they always wear a mask. Both Phinney Ridge and Wallingford came in at 66%.

West Seattle neighborhoods, at least according to the survey, didn’t score so well. Alki and Admiral neighborhoods registered just 52%.

sadly, not your mother

Hey look here, it’s some McNews. Do these things stop rioters and looters? Do they bring ANY common sense to the masses? Or just make folks feel good about themselves. Pretty sure you all have that tattoo and took that ice-bucket challenge too. You do want likes and to be seen as wonderful, right. Another opportunity to virtue signal. Driving that Tesla and installing solar panels on the roof were such a good start. And NO, I do NOT want dead people.

God loves you, even if you don’t.

This has been another enlightening episode of “Inside Paintking’s Stable Genius Brain” on KUOW.

When was the last time you listened to someone who wasn’t on the TV or radio?

The police chief is worried. Can the Jacobinistes control the Sans Culottes? Stay tuned…

Great. Now it would be nice if King County Health director Jeffrey Duchin pointed out that, since he doesn’t approve of groups larger than five for fear of spreading Covid 19, mass protests of 1000’s of people are dangerous during a pandemic. We’re averaging 10 deaths per day in Washington, most are elderly, and the numbers are going up. Many are catching Covid 19 from younger people. The whole state is headed in the wrong direction. When Trump refused to endorse masks, he was vilified for his anti-science stand. When King County leaders refuse to tell protesters to find another way other than mass marches to express themselves, they should also be vilified. Lives are at stake . . . politics (left or right) should not be in play. Leadership anyone?

The protesters spreading COVID was a myth put forward by right wing radio to attempt to discredit the protests and you were gullible enough to fall for it.

The spread among younger people is mostly due to various government’s failure to limit indoor socializing, such as restaurants, bars, etc. You don’t need to look further than the areas like Florida and Texas, where protests were minor, but COVID is skyrocketing among younger people.

But nice try attempting to absolve your orange god of his complete inaction on COVID!

Skyrocketing COVID cases amongst younger people are not an issue. They are surviving it at extremely high rates. It is the older population that we need to be paying attention to. The more younger people who get it while keeping older folks away the better off we are.

This is ludicrous. There are daily pictures/videos showing hundreds or even thousands of people shoulder to shoulder. Masks are only marginally effective and are not remotely a panacea. Being righteous has no bearing on your resistance to a virus. Further, while many of the rioters, oops, peaceful protestors, may have none or minimal symptoms, the people they give it to may suffer much worse consequences.

As for other states, Florida has 4x the population of WA, Texas almost 5x, so of course there are more cases there. The winner, though, is deep blue, miserable CA, who is now leading the infection rate.

Before leaving, let me point out that 1/3 of the deaths came directly from Cuomo’s decision to house people with covid in assisted living facilities. While this was before the exact ramifications of the disease was known, even a total idiot knows that older, infirm people are more likely to contract and die when exposed to a deadly illness.

This is ludicrous. There are daily pictures/videos showing hundreds or even thousands of people shoulder to shoulder. Masks are only marginally effective and are not remotely a panacea. Being righteous has no bearing on your resistance to a virus. Further, while many of the rioters, oops, peaceful protestors, may have none or minimal symptoms, the people they give it to may suffer much worse consequences.

That’s a great anecdotal hypothesis, but it doesn’t match actual case studies. Meanwhile, here’s a good writeup, feel free to search for many others that match this:

The protesters spreading COVID lie is nothing but an attempt to discredit people protesting for their lives. You’re either one of the liars or extremely gullible.

Sure, makes sense. What is the biological reason then that protestors are being spared? Please explain the science behind your rational.

Masks are the primary reason and social distancing when possible is a big help as well. This can be seen in pictures and videos of the protests and is clearly stated in the article and many other articles on the topic.

I take it you neither read the article nor did one ounce of research of your own?

I’m sorry that the reality doesn’t fit your narrative, but even the most obtuse person can clearly see that the rioters/protestors are doing anything but following the rules.

I’m sorry, but, until we contact-trace everyone who comes down with Covid, your virtuous (and nothing but virtuous) argument holds no water. Open air protests with hundreds of people versus an indoor gathering of 10? You might end up with the same number of infected, but to pretend these protests are safe just for the sake of virtue is ludicrous.

Here’s another freebee, since neither of you can’t be bothered to do some basic research:

Testing on protesters has yielded a positive rate lower than the national testing positive rate. Meanwhile, both of your opinions are purely anecdotal and in contrary of available data. If you have anything: facts, studies, articles etc, feel free to post it.

Until either of you posts a study otherwise, it can be safely assumed you both are just extremely gullible. I just can’t comprehend a life where opinions are given to you by others and critical thinking and basic research are non-existent.

I understand you want very badly to discredit protesters vying for their basic freedoms, but it also helps to have something to back up your given opinions.

Downvote away, but it doesn’t change the Truth™

Yes, the protests are likely to increase exposure to Covid. Sorry Truth, pasting articles doesn’t make you a scientist. I can do
that too!
https://www.scientificamerican.com/article/how-to-evaluate-coronavirus-risks-from-black-lives-matter-protests/

Hope Scientific American is ‘unbiased’ enough for you. You can’t change the actual truth.

Hope Scientific American is ‘unbiased’ enough for you. You can’t change the actual truth. From the third paragraph in the article you posted: There is not much evidence that the protests have caused spikes in coronavirus infections so far. And any increase in cases from the protests would be hard to separate from the fact that states are reopening in general, according to Caroline Buckee, an associate professor of epidemiology at the Harvard T.H. Chan School of Public Health. 🤔 The article was published on June 17th which would have been too early to determine the rate of infection given the 3-4 week gestation period as the riots didn’t start en mass until the very last few days in May. Further, given that the average age of a protestor is well under 50, and the lack of testing among the crowd, certainly in any sort of scientific way, means this isn’t a valid study or even a study at all. Again, if you can post anything (I would even take a Fox News article) that backs up your anecdotal observation, please feel free! At least Ballard By Boat tried to post an article, although it refuted his own opinions. Again,… Read more »

When the title of an article is “It Doesn’t Look Like the Protests Are Causing a COVID-19 Spike” then descends into a subjective opinion piece and is not a medical research article. The article was published on June 17th which would have been too early to determine the rate of infection given the 3-4 week gestation period as the riots didn’t start en mass until the very last few days in May. Further, given that the average age of a protestor is well under 50, and the lack of testing among the crowd, certainly in any sort of scientific way, means this isn’t a valid study or even a study at all. Part of the article went on to say that “I think that outdoors, in sunshine, with masks, is a fairly safe environment.” By this logic, Florida should have never had a surge and yet, it had a massive surge. Clearly, the entire article is simply subjective speculation, and, to be accurate, is dated and inaccurate at this current date. Again, there isn’t a biological reason why the protestors/rioters would be exempted from the same infection rate than any other large group gather would incur, and in fact, I’ll… Read more »

Ack, agar, ack, ack!!! Just got up from a loooong nap in the Ballard Commons again. Where’s my meth? Snitch better not have it.
Gotta clean my urine jug and tape up my tent house. Is the glory hole still by Fremont Brewing Ballard?
Gimme my food St. Luke’s! Must get heroin and pass out again. Dealer coming at 4 just like everyday. Yay! Gotta steal some bikes.
Thanks Dan Strauss! Leaving us alone to take over public parks. You da’ man.
An I thought Mike O’Brien was smart but you smarter!