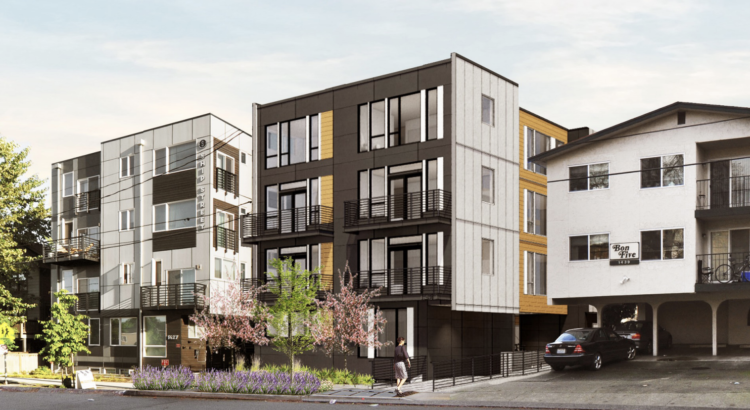 A 4-story, 22-unit apartment building is being planned for NW 65th St across from Ballard High School.

According to city records, the apartment building would replace a small triplex at 1431 NW 65th St, which sold for $1 million in 2016.

The plans include no parking, and the units would be a mix of studios and one-bedroom apartments. The architects for the project are b9—the building directly to the east of the project site was also designed by the firm and is called Ship Street Apartments.

Learn more about the proposal here, and access city records on the project here.

Brilliant! Jam another kabillion people into the neighborhood. Quality of life? We don’t need no stinkin quality of life. Besides, watching the neighbors cook, clean, and maybe more, is such fun. Do they get a wheel to run around on in a cage too? And notta 1 of them will own a single auto either. Still waiting for just 1 of these places to allow people to actually sign something stating they will NOT own any autos while residing there. As in walking the talk. You all know, progressive stuff. Could start something too.

We are they making new housing for the already housed? What about the homeless like me? We have feelings too. True, I’d refuse services to recover from heroin addiction and go further into insanity but that’s not the point.
The point is virtue signalling and how good it makes the “housed” feel like they are helping when they are actually enabling me.
Where is my free housing? That will fix everything and make me stop using and selling heroin. The end.

I’ll say it again: apartments without parking should only be rented to tenants without cars.

What about houses without parking?

Oh man, imagine what would happen if a “you can’t register a car to a home address without parking” rule went into place. All these old homes would see their value plummet as the pool of potential buyers would shrink dramatically. In response to this, perhaps the owners of these homes would build off-street parking for themselves and stop caring so much about where their neighbors store their possessions.

This new buildings without parking malarkey has got to end. Such a building is planned in my neighborhood within the next couple years. Assuming it will alter the area enough (difficult to find parking, increased noise) that I’ll be selling and moving.

Not everyone who rents has or needs a car. Forcing developers to create parking increases costs and takes up space–thus reducing affordability of new housing. That project is right near a major bus line.

Housing 22 people in the same space that used to provide only three units is a neat trick!
There are many people who need only a studio or one-bedroom apartment, and who do not own cars. They depend on public transportation. It’s a simpler lifestyle. It’s cheaper to live without the expense of owning, licensing, and maintaining a car.
If you need a place to park your car, just don’t move in there.
There is a lack of affordable housing in Seattle. Density in housing is a good thing for more than one reason. Urban sprawl eats up farmland and forest land that is better left as it is.

I don’t want to quibble about housing without parking. And there is nothing wrong with housing for 1 or 2 people households. But it also seems like a lost opportunity to provide affordable family-sized housing across the street from a high school. can’t have everything, I suppose.